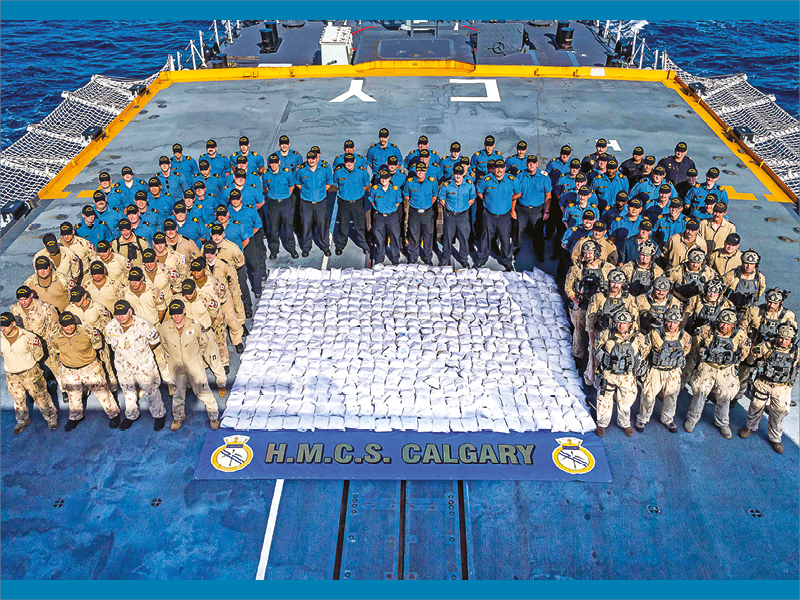 The Combined Maritime Forces have conducted the largest ever heroin bust in its history when the Royal Canadian Navy (RCN) ship HMCS Calgary, operating under the command of the Canadian-led Combined Task Force (CTF) 150, intercepted two vessels suspected of smuggling off the coast of Oman on April 23.

The record-setting haul of 1,286kg of heroin was achieved in seven years since HMAS Darwin interdicted 1,032kg of the drug in 2014. In addition to their record-breaking success, Calgary struck again less than 24 hours later with a second interdiction capturing 360kg of methamphetamine.

“I’m speaking for everyone on HMCS Calgary when I say it’s a great feeling to have made two substantial busts so early into our operation,” said the Commanding Officer of the ship, Mark O’Donohue.

“A lot of work and coordination at both the ship level, and throughout CTF-150, and the Combined Maritime Forces (CMF) coalition goes into our work. It’s fantastic to see that pay off and to know we are contributing to the interruption of a revenue stream that is being used to fund terrorism.”

Whilst operating off the coast of Oman, the RCN frigate intercepted two vessels. The ship’s boarding team conducted subsequent searches, uncovering the high value contraband with a combined total worth of over US$23.22mn, making a salient impact to drug trafficking, often used to finance terrorism in the region. These interdictions come less than ten days after Calgary began operations in the region, increasing the total number of successful counter-narcotics operations under CTF-150 to 14 since the RCN took command of the task force on January 27.

“An excellent job by our Canadian partners, conducting these successful interdictions in such rapid succession. As a multinational organisation, our agility is such that we are able to maintain a constant watch on illicit actors, using ships from many different navies,” said Deputy Commander of CMF, Commodore Ed Ahlgren of the Royal Navy.

CMF is a multinational maritime partnership, which counters illicit non-state actors on the high seas and promoting security, stability, and prosperity across approximately 8.3mn square kilometres of international waters in the Middle East.