The taste of Ramadan in Syria 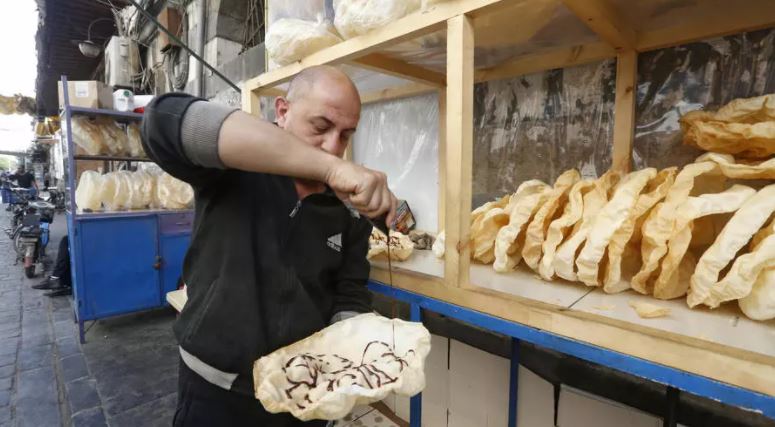 During the Muslim fasting month, just before sundown Damascus residents flock to buy the deep-fried sweet from street vendors who make them in bubbling cauldrons all over the sidewalks.

The crunchy pastry – also called ‘Ramadan bread’ – is prepared by dropping a thin circle of dough into hot oil until it snaps like a crisp. Fished out, the sweet-smelling pancake is then drizzled with dark brown date or grape molasses.

Government employee Abdallah, 51, said he rushes out to buy a naaem to share with his wife and two daughters at the end of every day.

“However tough the circumstances, the naaem is a tradition we can’t go without during Ramadan,” he said, adding, that at around 2,500 Syrian pounds, the crunchy dessert is still one of the few affordable ones.

Other more elaborate sweets, such as sesame-covered barazeq biscuits or syrupy baklava stuffed with pistachios, have become prohibitively expensive.

Dizzying price hikes have forced many Syrian households like Abdallah’s to cut back on some food items this Ramadan.

Also, this year, red meat, chicken broth, and pistachio-filled sweets are largely off the menu for iftar – the meal at the end of a day’s fasting. Instead, most families opt for cheaper items to put on their dinner tables such as naaem.

“Children love it, and that’s the most important thing,” Abdallah said.

In one Damascus market, 49-year-old Abu Tareq called out to customers in a bellowing voice, near endless airy stacks of crispy naaem. He said they disappear fast in the run-up to iftar.

“Sweets are an essential part of the Ramadanspread, and naaem are the cheapest and most delicious,” he said, adding that the wealthy, too, are customers because it is a traditional Ramadan sweet.

Just a stone’s throw away from Abu Tareq’s shop, the scent of more freshly baked pastries wafts out of some of the sweets shops for which Damascus is famous. But each year, fewer and fewer people buy and take home trays of syrupy treats, baked in ghee and stuffed with nuts or tender dates.

A kilo of those sweets can cost up to 50,000 Syrian pounds. In a country where the currency has lost 98 percent of its value since the start of the war in 2011, and millions struggle to put food on the table, that is money many simply do not have.

Instead, crispy Ramadan bread is still a delight they can afford.

“The naaem is within everyone’s reach,” said Abu Tareq. “Ramadan wouldn’t taste the same without it.”