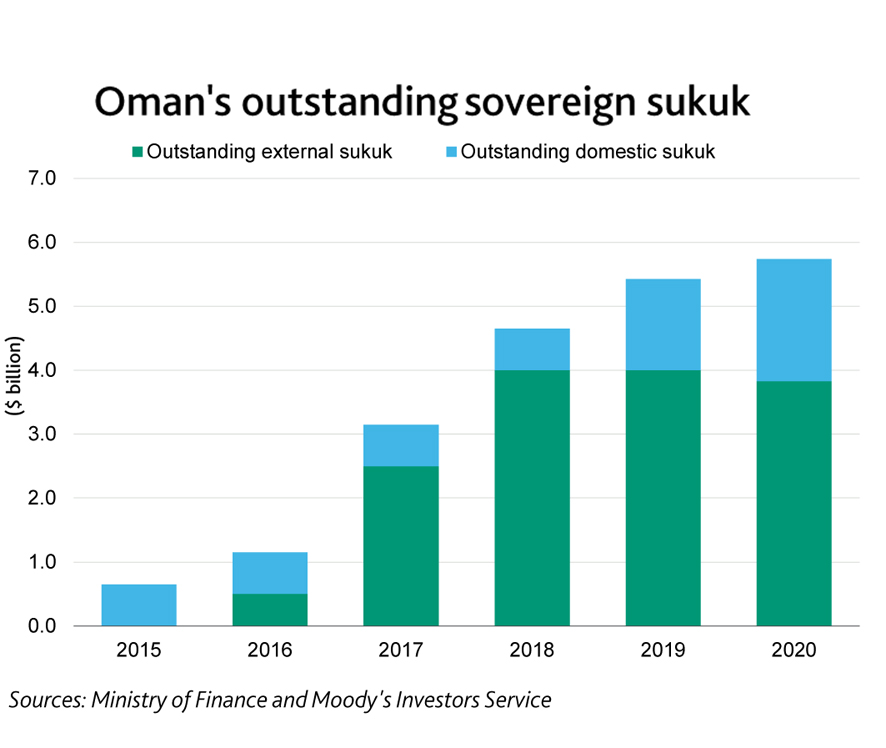 The rapid expansion of Islamic banking assets in Oman will continue to deepen the market for domestic government sukuk, Moody’s Investors Service has said.

‘A rising share of Islamic assets will continue to deepen the market for domestic government sukuk, although from a low base compared with the rest of the region, supporting government liquidity,’ Moody’s said in a research note.

The share of Islamic assets in Oman’s total domestic banking assets increased to 14.6 per cent in February 2021 from 13.9 per cent a year earlier, and nearly double the 7.5 per cent level in 2015.

Rapid expansion in Islamic banking assets, Moody’s said, has been a driving force behind growth in domestic demand for Sharia’a-compliant securities, including government sukuk, which has allowed the sovereign to diversify its domestic funding base.

Moody’s said Oman’s government has been a relatively irregular, opportunistic issuer of sukuk since its maiden RO250mn domestic sukuk in 2015, which it refinanced the following year. These two ad-hoc issuances were followed by large-size international sukuk in 2016, 2017 and 2018 for a total of US$4bn, including a US$500mn amortisingsukuk.

By contrast, over the past two years, Oman’s government sukuk issuance has been limited to the domestic market, with RO300mn in 2019, and RO433mn in 2020, Moody’s noted.

As of the end of 2020, Oman’s outstanding sovereign external sukuk totalled US$3.8bn, while its outstanding domestic sukuk were equivalent to US$1.9bn, according to the ratings agency.

In 2020, total outstanding sukuk comprised only around 11 per cent of Oman’s total government debt, which is considerably lower than most other GCC sovereigns and other regular sovereign sukuk issuers.

‘This partly reflects Oman’s still relatively small share of Islamic banking assets in total banking assets compared with the other sukuk-issuing sovereigns; Sharia’a-compliant assets account for around 80 per cent in Saudi Arabia, more than 70 per cent in Bahrain, around 40 per cent in Malaysia, and around 30 per cent in the UAE and Qatar,’ Moody’s Investors Service said.

‘The declining share of sukuk in the funding mix reflects a general absence of international sukuk issuance, in part driven by investors’ preference for conventional bonds amid tighter global liquidity conditions, and the increase in Oman’s sovereign market risk premia following the sharp decline in oil prices during 2020,’ Moody’s added.

However, recovering investor appetite and Oman’s large gross financing requirements, which Moody’s estimates to average US$9.1bn per year in 2021-22, will likely result in greater reliance on Islamic financing in the next two years.

‘We expect the government will meet US$2bn–US$2.5bn of its annual borrowing needs with sukuk issuance, around half of which will likely be in the domestic market, supported by the growing share of Islamic banking assets.

At the end of February, Islamic banks’ holdings of government sukuk formed around 7 per cent of their total assets, in line with the government security holdings of conventional banks,’ Moody’s Investors Service explained.