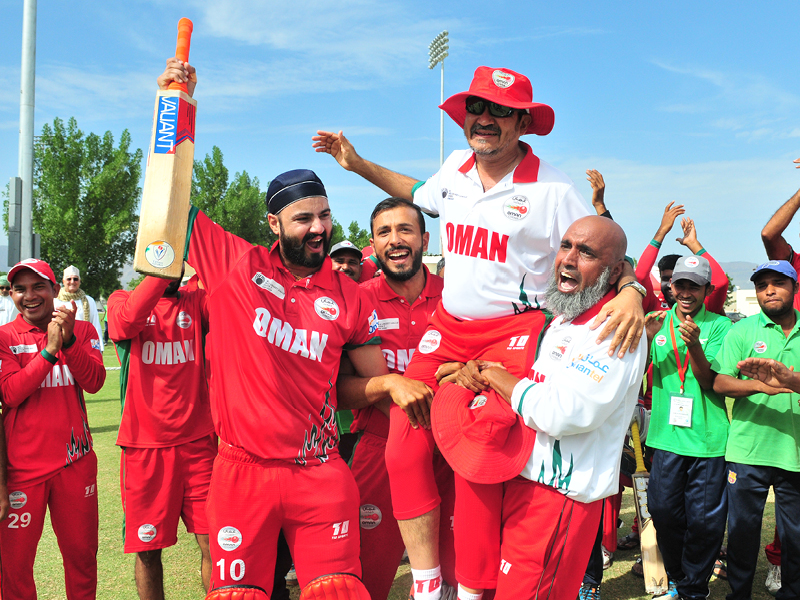 Long-serving OC board member, Pankaj Khimji, to be the next Asian Cricket Council vice-president

The face of Oman Cricket (OC) is all set to be one of the most powerful voices of Asian cricket. Pankaj Khimji, OC’s senior board member, will be the next vice-president of the Asian Cricket Council (ACC) and his elevation to be among the top office-bearers of Asian cricket governing council was warmly welcomed by the Oman sports fraternity on Friday.

Khimji will be officially appointed as the ACC vice-president at the next annual general meeting (AGM) of the ACC, likely to be held in June-July.

This will be the first time that an Omani official will be serving the Asian cricket body as a vice-president and the tenure of Khimji will be for one year. He would succeed incumbent Malaysia’s Mahinda Vallipuram.

In his exclusive remarks to Muscat Daily on Saturday, Khimji said, “I feel elated at the appointment and I am proud to hold the sultanate’s flag at the continental level.”

Khimji has been a long-serving member of the ACC executive board and has been on the panel since August 2010.

Khimji said that ‘it is a great opportunity for him to serve the interests of Associate nations  and is looking forward to his tenure’.

“I am thankful to the ACC president Mr Jay Shah for handing me the responsibility and I think that with my years of experience, I could contribute to the growth and development of the game in the continent and in particular, among Associate nations,” he said.

Khimji, it may be mentioned, had late last year also entered the fray for the Associate Members’ director’s post on the International Cricket Council (ICC) Board. The senior OC official, however, narrowly missed out, losing by a single vote as three administrators of the eight in fray from across the world were selected by 92 Associate member nations.

Khimji said, “Yes, it was a very close affair [on the ICC board elections]. I lost by a vote but that’s how it is. This time at the ACC elections, Jay Shah came up with a brilliant idea of splitting the term of vice-presidency to end the stalemate. So Mahinda [Vallipuram] is serving as the vice-president till the next AGM, which is scheduled in June-July. Then I will serve out the remaining one-year term.”

Khimji said that the appointment brings a lot of spotlight on Oman cricket and credited the on-field performances of the national team over the past five years in serving as a catalyst for his ACC vice-presidency. “The national team has been doing great and our infrastructure development and progress has been noticed by cricket-playing nations from across the world. This post will bring more focus on Oman and I am proud of it,” he said.

On the key priorities ahead for the ACC, Khimji said, “It is very important to organise the Asian Cup and the ACC Cup once the pandemic situation improves. These are important events for the teams as well as the ACC. Cricket is a gladiator sport today and the commercial interests are huge. We need to ensure that nations reap the benefit from the commercialisation of the game.

“The other important task is to support nations on the fringe to reach Associate level. We have seen countries like Singapore, Hong Kong where cricket is picking up. Also Thailand women have shown great potential.” Khimji said that ‘the idea of having cricket at the Asian Games and Olympics is worth pursuing as that would help the game grow’.

A life member of London-based Marylebone Cricket Club (MCC), the guardian of the laws of the game, Khimji has been representing Oman Cricket at ICC and ACC in various capacities.

Khimji said, “My tenure as an Asian vice-president will help me gain experience of working at the top and in close cooperation with officials of the ‘Big Four’ of Asian cricket – India, Pakistan, Bangladesh and Sri Lanka.

“I will be more than happy to share my experiences as an Asian office-bearer with other Omani sports officials. We could find better ways to promote sports at the grassroots level as for me Oman’s interests are the top-most priority.”

“My appointment is a recognition of Oman and Oman Cricket, and I hope to strengthen relations with the Asian powerhouses to help, not only Oman, but also other Associate nations,” he added.

One of the top businessmen in Oman, Khimji is director of Khimji Ramdas Group and is known to fight for more recognition to Associate members.

He said, “I want to build a pathway for the Associates to be recognised and increase cricket globally. Make the big boys take notice.”

And there is no denying that the man has a passion for the game, which his late father and former OC chief, Kanak Khimji, nurtured for decades till he passed away in February 2021.

As he looks forward to a new innings as an ACC vice-president, one thing can be certain, here is a man who bats straight and knows to play hard if the situation demands.