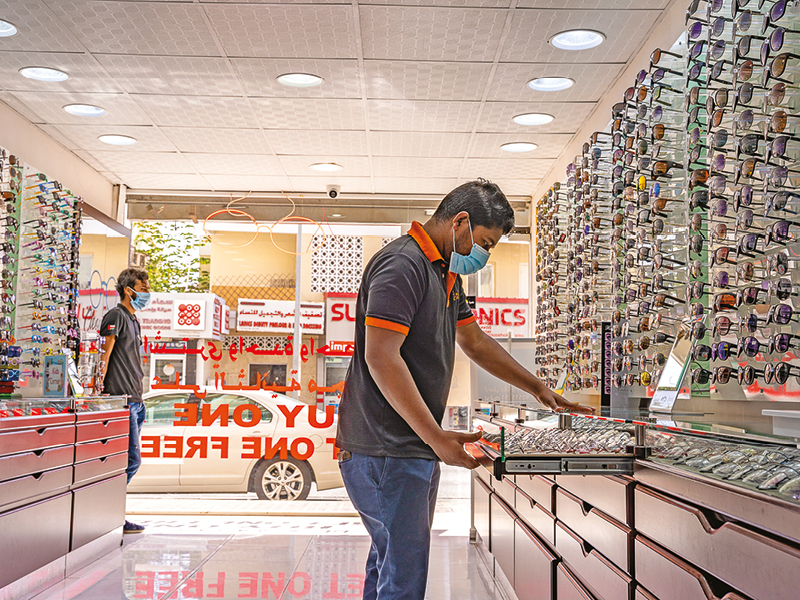 Omanisation of professions related to the business of optics and sale of eyeglasses has left a large number of small optical shops in a fix. Following dwindling business in recent times, the additional challenge of hiring Omani optometrists and technicians has prompted many optical shops to mull over downing their shutters.

The Ministry of Labour issued decision No 7/2021 in January this year to restrict the professions of fuel station managers and those related to the business of optics and sale of eyeglasses to Omanis only.

As per ministry statistics for March 2021, a total of 932 individuals were employed in optical professions in the private sector out of which 74 were Omanis.

“The role of an optometrist in the majority of small shops goes beyond eye testing; they work as salesman, accountant and at times as cleaner too,” said Abdul, who prefers being known by his first name. An optometrist, he runs a shop in Ruwi on profit sharing basis.

AmaniAdim al Hajri, who has been working as an optometrist for a month now in Muscat, said, “I completed my degree in 2019, with a batch of 30 students, and couldn’t find a job in my hometown.” She’s from Ibra, North Sharqiyah. Currently living in a hostel in Muscat, she travels to Ibra every weekend.

Amani would prefer working in a clinic under an ophthalmologist rather than a shop where she can learn more about her profession. “It will prepare me for further study and become an ophthalmologist myself. In a shop, we will be stuck in sales and a little bit of eye testing.”

Cleopatra Group, which has several branches of optical shops, has recruited fresh optometry graduates and trained them for the job. “As per our internal Omanisation plan, we hired one Omani just before the profession was Omanised in January and two after the announcement,” said Sheikh Tajuddin, finance controller of the group.

“We could only find freshers who we supported in appearing for the Prometric Exam (conducted by the Ministry of Health to secure a licence for practice) and trained them in all aspects of the optical shop business,” Tajuddin informed. Of the three Omani optometrists on Cleopatra’s rolls, two are now licensed, while the third will take the exam soon.

Another expat optometrist, who manages a shop on profit-sharing in Muscat, has a prospective qualified professional with the Prometric Exam clearance but can’t be hired because the position is Omanised.

“I have invested RO30,000 from 15 years of my savings to start another optical shop in Barka. Either the authorities should arrange an Omani optometrist or give me visa clearance for an expat. My life savings are at risk,” he said.

According to Tajuddin, the job of a fitter does not require any formal qualification and can be learnt with experience. “Yet, it’s the most challenging part of achieving Omanisation in optical shops. We want to hire and train Omanis for the fitter’s job, but as of now we haven’t found a suitable Omani.”

Tajuddin is lucky his fitter’s visa is valid for another year, but Abdul is running out of options. His fitter’s visa has expired and renewal request refused. “Even if authorities are willing to train local youth, it will still be challenging for small shops to provide the hi-tech fitting equipment they have used in university. Our fitting unit is for RO300, while state-of-the-art machinery can cost as high as RO10,000. Asking us to upgrade or invest in new machinery is like asking us to close down,” said Abdul.

According to the expat optometrist with RO30,000 of his life savings at stake, most fitters in small optical shops have at least five years of experience.

“It is a skilled job. One small mistake can spoil the optical lens or frame, in which case the cost is deducted from the fitter’s salary.”

“In most small shops, the optometrist and fitter run the show seven days a week. We cannot close our shop on weekends because that is when most of our sales happen, meaning we need more Omani staff which will result in an increase in running cost,” said Tajuddin.

Amani rues the fact that she hasn’t been trained in sales. “Convincing customers who bargain is a challenge, but I am learning and I will try my best, inshallah.”

Abdul, however, isn’t as optimistic. “Our clientele comprise the low budget Omani spender, and we manage to provide affordable products and service due to low running cost. We are more than 40 per cent cheaper compared to the bigger shops,” he said. “Eventually, these small shops will close and the biggest losers will be low budget customers.”