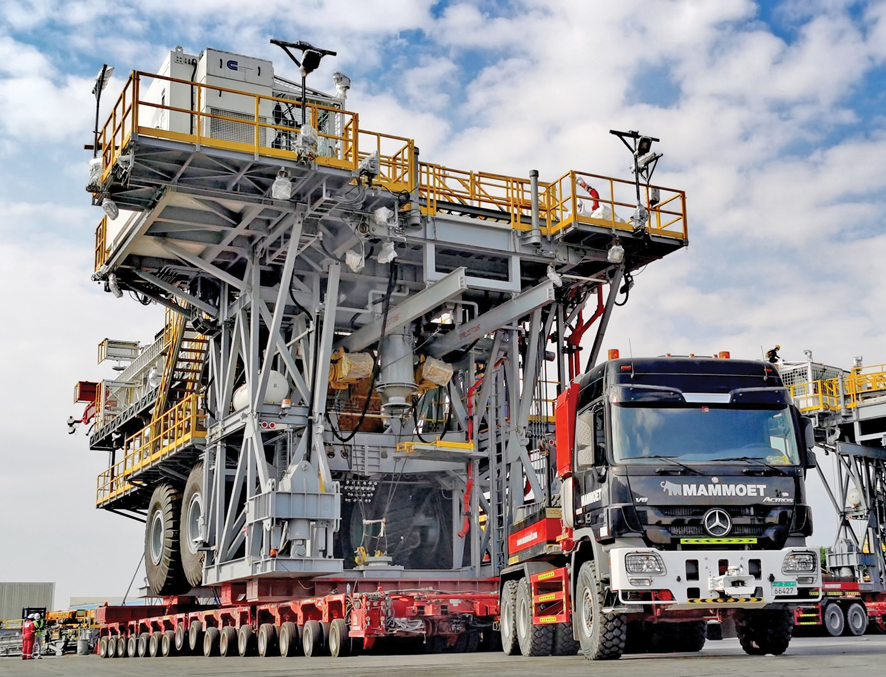 Mammoet, the global heavy lifting and transport specialist, was contracted by KhimjiRamdas Shipping (KRS) to safely deliver two pre-assembled onshore oil rigs and accessories from a fabrication facility in the UAE to the site in Nimr, Oman.

Manufactured in the UAE, these new-generation fast moving rigs are a new addition to the current fleet of Oman’s largest drilling company Abraj Energy Services, Mammoet said in a press statement.

Shipping of oversized and heavy cargo requires specific expertise, as infrastructure limitations create bottlenecks that demand alternative transport approaches. At 37.7m long and 10.7m high and up to 471 tonnes, the sheer size and weight of the pieces meant Mammoet had to compose an optimal route for the cargo by performing the necessary route studies and obtaining required permits, Mammoet said.

The rigs were jacked up onto beams and stools at the fabrication facility in Jebel Ali Free Zone, then transported to the Port of Jebel Ali using conventional trailers and trucks. The cargo was then loaded-out at the port onto a Mammoet 300 class barge for onward shipment to Oman, where it was received and loaded-in at the Port of Duqm. From there, the rig sections were transported over a distance of 400km to the site in Nimr.

MuthuEsakki, project manager at KhimjiRamdasShipping, said, “The prompt logistics for the movement of the packages based on the client’s timeline was critical to the overall success of the project. KRS and Mammoet team worked closely and managed the end-to-end logistics from the UAE to Oman. The challenge was to overcome hurdles arising due to the sheer size of the packages and moving them between two countries using sea and road mode.

This involved extensive coordination and support from the government authorities in both countries and we are thankful to all stakeholders for their support.”

Ali Kobeissi, project manager at Mammoet, said, “Teamwork and cohesive collaboration with government authorities and police, in both the UAE and Oman, were the key to mitigate risks and have all permits in place. Thorough planning and coordination ensured we were able to meet the needs of our customer by safely delivering the rigs to their final location.”