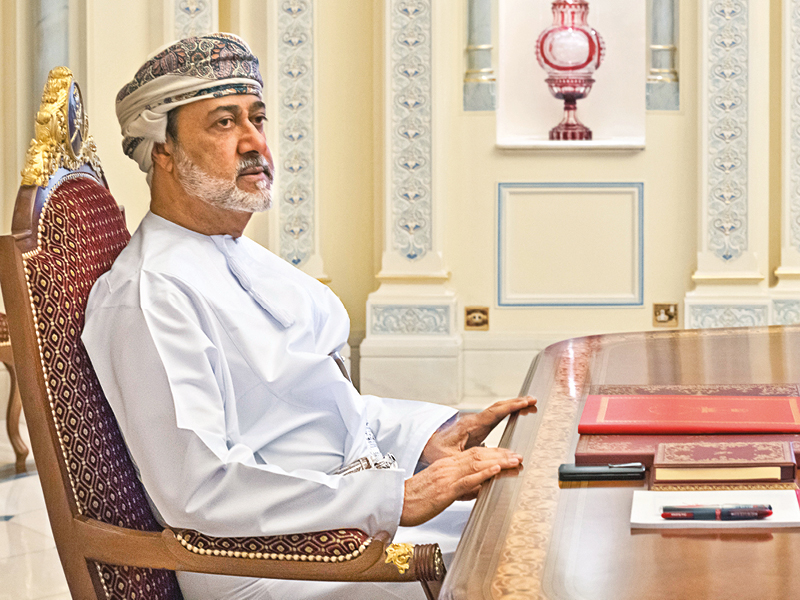 His Majesty Sultan Haitham bin Tarik presided over a meeting of the principal committee of the National Programme of Fiscal Balance, held at Al Barakah Palace, on Thursday.

At the outset of the meeting, His Majesty the Sultan reviewed financial and economic developments in the country as a result of efforts made in implementing programmes and initiatives of the Fiscal Balance Plan (2020-2024). His Majesty the Sultan expressed his satisfaction over procedures carried out by the government in this regard.

His Majesty the Sultan gave his Royal directives to all officials of the government to follow up on livelihood conditions of citizens in order to secure fair standards of decent living for them.

His Majesty the Sultan reaffirmed that the realisation of decent living for citizens now and in the future is a lofty goal in all government actions in different sectors. He instructed all officials of the government to undertake all procedures deemed necessary for addressing any negative impacts that might affect citizens’ livelihood during this stage impinged by various challenges, on top of which comes the COVID-19 pandemic and its adverse repercussions, particularly at economic and social levels.

His Majesty the Sultan blessed all initiatives presented by the departments concerned within the context of regulating the Social Security Scheme. The Royal gesture came as part of the continuous attention that His Majesty the Sultan accords to social aspects of citizens’ life and in implementation of the national priorities of Oman Vision 2040, notably its strategic approaches aimed to secure decent, sustainable life for all and to provide social security for the target segments.

Along with members of the principal committee of the National Programme of Fiscal Balance, the meeting was attended by the Head of the Private Office, the Minister of Economy, the Minister of Social Development and representatives of the programme’s team.