AT EASE WITH ART 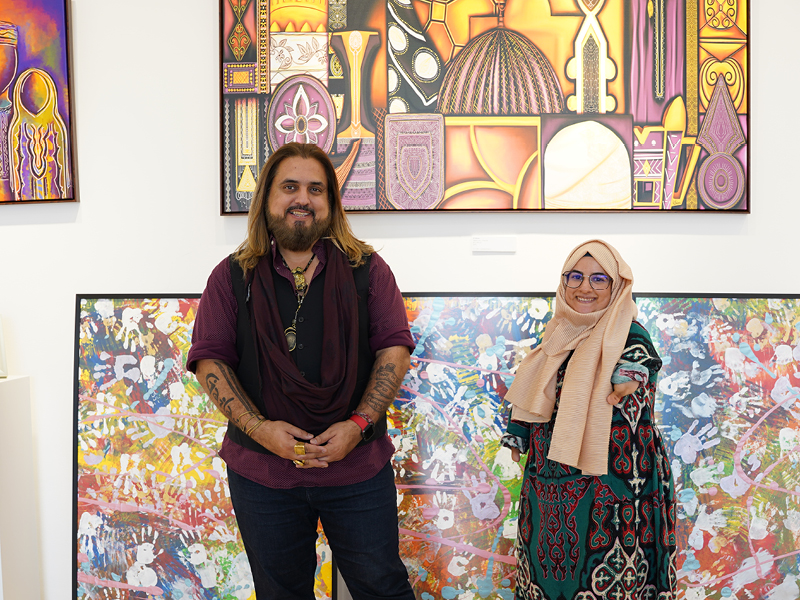 “Hands! Isn’t that the basic thing we need as artists? But what if one is deprived of this basic thing? What if the world around you told you that you couldn’t paint and every person denied you of your desire to create? Today is one such story of an artist, and dear friend, who has defied every logical explanation to a conventional thinking mind of why she shouldn’t be an artist.”

That’s how Ibrahim Gailani, self-taught contemporary artist of Iraqi and Pakistani descent living in Muscat described and introduced Omani artist Safia al Bahlani in the fourth episode of Art Beats. “With no hands, an overwhelming desire and ambition, overpassing hurdles which said ‘you can’t do it’, she has started her own art gallery, a painting studio, and runs a successful art business. Let’s meet this inspiring person – Safia al Bahlani,” Gailani said as she responded with a smile that seemed to say mischievously, ‘Oh, is that me?’

Born with multiple physical disabilities –  no hands, a deformed left knee, and a short right leg stump, impaired hearing, and a speech as well as learning disability, Safia, nevertheless, came across as cheerful and totally optimistic. In fact, to Safia, reeling out the list of her disabilities seemed only a theoretical reference to herself, something which only needs to be put on record. For, in reality, none of these proved to be hurdles that took a toll on her indomitable spirit and her unflinching zeal to succeed against all odds – quite literally.

Having collaborated with Safia for a number of projects in the past, Gailani took note of the fact that she has always been a source of inspiration to varied audiences in the past, despite having a string of disabilities, most of which aren’t quite evident. However, to Safia, recounting these for the benefit audiences of Art Beats, wasn’t a disturbing exercise, and she went on to identify them with profound ease.

Safiya, who had been adopted at the age of three by Sabah al Bahlani, a single mother, had proceeded to the United States for her early education and therapy, and had found herself excelling in arts. As a teenager, she discovered a strong urge to become a professional artist, so, after graduating from the American International School of Muscat, she studied graphic design.

When asked by Gailani how she decided to become an artist in spite of having a host of disabilities, Safia said, “Art has always been my best friend, my therapy, and it really helped me to get on, day to day. Since I also had a learning disability, I learnt to memorise things through colours and shapes. So, art was the best tool for me,” she said, adding that colours were her greatest inspiration, as they set her at ease, not only with art, but with life itself.

Today, Safiya has successful business in art-related merchandise. She also runs an art studio and community art gallery – Safiya Arts Gallery and Studio – where she holds classes and workshops in arts. Alongside this, she continues to paint and find varied expression to her feelings and her own take on different issues of modern living through art.

Safia has won numerous awards in art as well as has been a motivational speaker. She has participated in TED Talks as well as delivered motivational speeches to youth in different forums to inspire them to take on challenges and fulfill their ambitions with hard work and determination.

Recalling her own experience as a small child when people viewed her with skepticism and always ticked her off as unfit for many tasks, Safia stated that more than facing the difficulties of a challenge, what often weighed her down was the negative attitude of some people who often seemed to think – she can’t – without first giving her a chance. She often had to prove her abilities and that, too, seemed to take a toll on her mental wellbeing.

To exemplify, Safia shared her ordeal of securing an Omani identity card (which needed a mandatory fingerprint), which was ‘three-hour battle’ of convincing the concerned authorities – a demonstration of her never-day-die attitude and her unsurmountable spirit which are the forces that keep her going every single day.

“I realised that I cannot get frustrated. It is very easy to switch off and say, ‘why me?’ I have gone through that journey and I have learnt that I am here to educate and advocate, and give others an opportunity, not just think of myself,” she asserted.

Sharing an episode when she visited Bahrain in 2014, at the behest of British Council, for a workshop conducted by another disabled British artist, Safia said she came forth mesmerised and convinced that she did not need to conceal the fact that she was disabled. “I learnt how to connect with your body and figure out where your strength lies. When we think of strength, we think of hands, but it is not so. It was a journey within your mind, to find your true strength.”

Hosted by Gailani, Art Beats, shot by Studio.t in Safia Arts Gallery, is dedicated to showcasing art across various media. Via interviews with popular artists in Oman, this series conveys not just the challenges that artists have gone through in their respective journeys but also provides tips and insights for budding artists and art enthusiasts to understand, appreciate, as well as propagate, artistic endeavours in Oman. It is being done for a worth cause of pledging support towards the work of the Oman Cancer Association.