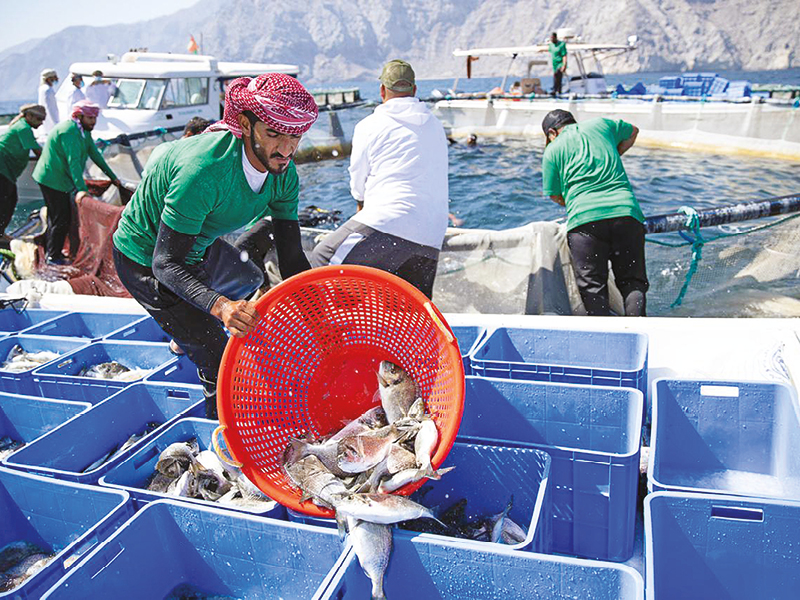 The Ministry of Agriculture, Fisheries and Water Resources, in cooperation with Blue Water Company, started harvesting  around 50 tonnes of European sea bream fish in Musandam on Wednesday.

This is the first batch of European sea bream produced in an aquaculture project launched in June last year in Musandam.

On Tuesday, the ministry signed an agreement with Sultan bin Saud Trading Corporation to purchase and market the cultured European sea bream produced from the project.

H E Sayyid Ibrahim bin Said al Busaidi, Minister of State and Governor of Musandam, said the project is important and will boost the economy in the governorate.

H E Eng Yaqoub bin Khalfan al Busaidi, Undersecretary for Fisheries in the Ministry of Agriculture, Fisheries and Water Resources, said, “The project has achieved good results in terms of production and growth in a record period.”

He affirmed that the ministry has carried out surveys in a number of khors in Musandam to study the possibility of implementing fish farming projects in floating cages.

“The surveys have proven that there are more than 30 suitable sites for investment in this field. The ministry is continuing to conduct studies to ensure the establishment of such projects.”

Eng Jassim bin Muhammad al Shehi, the project supervisor, said, “The project is located in Khor Ghab Ali in the wilayat of Khasab. The weight of an average fish reached 350g in less than seven months compared to 12 months in European countries. This is an indication of obtaining a return on investment in a short period at lowest cost and less feed used. The harvest will reach nearly 50 tonnes.”