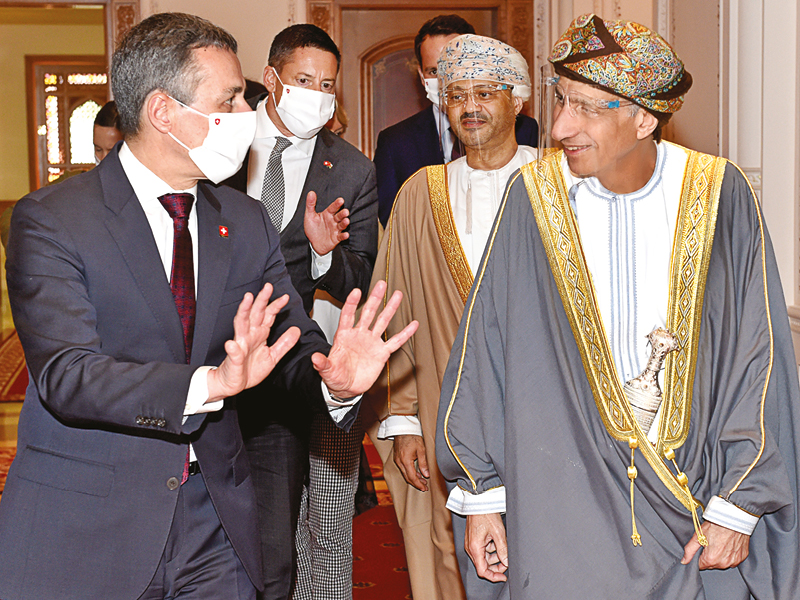 H H Sayyid Fahd and Cassis reviewed bilateral relations and ways of enhancing cooperation between the sultanate and Switzerland. They exchanged views on matters of common concern, as well as regional and international developments.

Cassis expressed Switzerland’s willingness to cement ties with Oman in various spheres. He voiced his country’s appreciation for the sultanate’s balanced policies in view of international relations, noting that this earned Oman the respect of all.

Cassis later commended the outcome of his meetings with Omani officials. He expressed his satisfaction with the steady growth of relations between the two countries which, he said, shared a common keenness to upgrade cooperation.

A session of political talks between Oman and the Switzerland was held at the Foreign Ministry on Tuesday.

The Omani side was headed by H E Sayyid Badr Hamad al Busaidi, Foreign Minister, while the Swiss side was chaired by Cassis.

The session discussed aspects of bilateral cooperation between the two friendly countries and means of promoting them in economic, scientific and cultural fields. The two sides exchanged views on several regional and international issues of common concern. They also emphasised supporting all peaceful initiatives to consolidate international peace and stability.

The two sides also signed a memorandum of understanding on political consultations between the foreign ministries of the two countries. The session was attended by H E Balz Abplanalp, Swiss Ambassador to Oman, and officials from both sides.