Hadi and Kindi climb to fifth spot as competition hots up 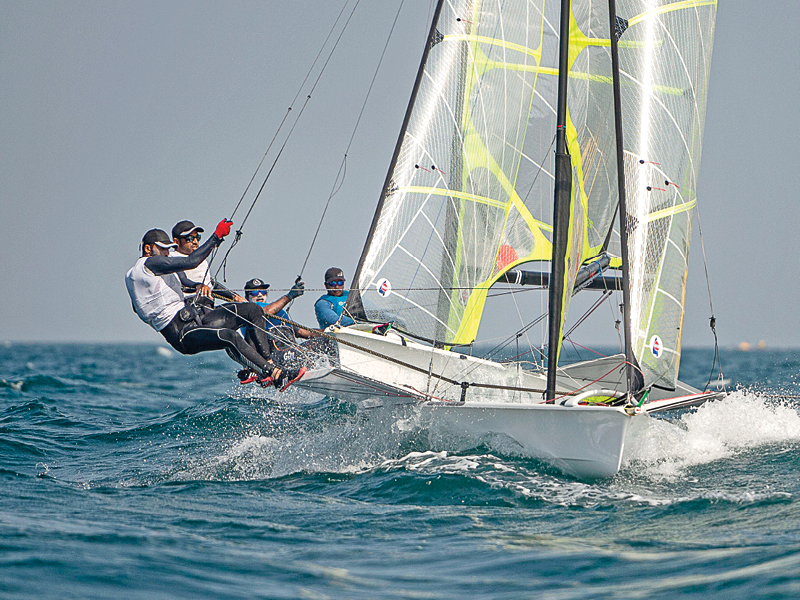 It was a much-improved display by Oman’s Olympic hopefuls – Musab al Hadi and Waleed al Kindi – on Tuesday in the 49er class at the 2021 Mussanah Open Championship, an Olympic Qualifier for Asia and Africa, at the  Millennium Resort Mussanah.

Battling challenging conditions, the Omani pair recorded two podium finishes in the first and the last race of the day to remain in contention of a spot for Tokyo Olympics, finishing among the top-five on the leaderboard with two more days left to determine the lone qualifier for the Tokyo Olympics.

Overnight leaders, KC Ganapathy and Varun Thakkar of India, did just enough to maintain their lead at the top, the first time that there was no change at the top in the class after four days of racing. While the Asian Games bronze medallists failed to make it the podium even once on Tuesday, the good work done by them a day before helped them end with a nett score of 42, 16 of which were picked on Tuesday.

China’s Hong Wei and Chai Xiang were not far from the leaders as they won the second race of the day to end with a nett score of 51. Trailing them by six points was the duo from South Africa, Benjamin Daniel and Alex Burger, while the Thailand pair of Don Whitcraft and Dylan Whitcraft is fourth with the same number of points. Hadi and Kindi trail by a point to them.

With just a point separating three teams, Wednesday will prove to be a litmus test for the sailors ahead of the medal races on the final day on Thursday.

Tuesday’s display from Hadi and Kindi once again demonstrated their fighting spirit. Overcoming Tuesday’s disappointment, Hadi and Kindi bounced back in style as they claimed a third-place finish in the opening race. They slipped in the next race to ninth but rallied with another third-place for their fifth overall podium finish in the 12 races held so far. Besides two third-place results, the local pair has posted two wins and come  runner-up once.

Hadi and Kindi would now hope to be more on the podiums over the next two days as they chase a historic Olympics qualification. If they do succeed, they will become the first Omani sailors to qualify for the Olympic Games, a goal set by Oman Sail since their inception in 2008.

And in the men’s RS:X class, Thailand’s Natthapong Phonoppharat extended his domination to lead comfortably over the Philippines’ Yancy Kaibigan and Geylord Coveta.

Also, the women’s RS:X class witnessed Singapore’s Amanda Ling Kai snatch lead from the Philippines’ Charizanne Napa and is ahead by a point with India’s Ishwariya Ganesh third. Only three participants are there in the class.

Meanwhile, in the Laser Standard class, Singapore’s Ryan Lo Jun Han took firm control at the top. He has 15 nett points after eight races while India’s Vishnu Saravanan is second with 29 and Thailand’s Keerati Bualong at third place (31).

In the Laser Radial class, Indian sailor Nethra Kumanan is on top with Dutch Emma Savelon second and another Indian, Harshita Tomar, third.

Speaking after the conclusion of Tuesday’s races, Nethra said, “My aim is to be consistent and keep the points low so that I have an advantage going into the final days.

“Today was difficult because the wind suddenly died and then came back during the race and I made some mistakes, but there are still two days to go so we’ll see what happens.”