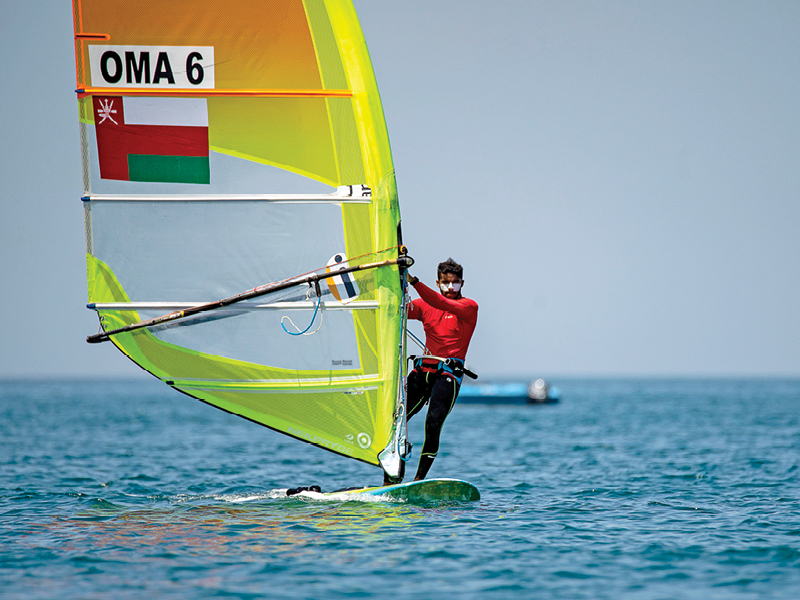 It was not the best of starts for the Omani sailors as the Mussanah Open Championship, which is serving as an Asia and Africa Olympic Qualifier, began at the Mussanah Sports City on Saturday.

Two Oman teams – Musab al Hadi-Waleed al Kindi and Ahmed al Hasani-Abdul Rahman al Mashari – competing in the 49er class had a day to forget as they ended day one at tenth and 13th spots respectively among 14 competitors after the conclusion  of three races. China’s duo of Chao Xiang and Hong Wei led the standings with a total score of seven points and closely following the pair was another Chinese team of Wang Xin and Zhou Zhibo with 11.

South Africa’s Alex Burger and Benjamin Talbot Daniel were third with 16 while India’s Ganapathy Kelapanda Chengappa and Varun Ashok Thakkar were fourth with18.

Hadi and Kindi recorded 11th place in the opening race and then improved to sixth in the next and finished eighth in the third and final race to total 25 points. Hasani and Mashari had disappointing starts in the first two races as they were 13th and 12th respectively before making a comeback with a sixth to finish with a score of 31.

The sultanate is fielding sailors in 49er and RS:X classes and a lot of hopes are pinned on the 49er teams.

On Saturday, two RS:X races took place and Qutaiti was the best Omani performer with a tenth place finish (20 points) while Hadrami was 12th with 22 and Mujaini 13th at the bottom with 26. Thailand’s Natthapong Phonoppharat led with four points and was followed by countrymate Navin Singsart. The Philippines’ Yancy Kaibigan was third with seven.

The RS:X class trio and the two Omani 49er teams have a chance to make history as a title win after six days of racing will secure a spot at the Tokyo Olympics, a first for Oman.

The Mussanah Open Championship is also serving as an Olympic qualifier for Laser, Laser Radial, 49erFX and RS:X classes for men and women.

A total of 102 sailors from 17 countries are participating in different classes in a bid to secure their place at Tokyo Games as the championship in Mussanah is the final qualification event.

International race management officials selected by the Asian Sailing Federation (ASAF) joined their counterparts from Oman Sail, organisers of the event, on Saturday.

Ahead of the start of racing, Rashid al Kindi, Oman Sail director of sailing said, “We welcome a strong fleet to sail in Oman and we are confident of a high level of competition. Conditions in Mussanah are great and with such high stakes, we know the sailors will be able to perform at their peak. The competitors in each class are evenly matched, so it will be all about small gains on each day and fine margins that will decide who qualifies for Tokyo 2020.”

The Mussanah Open Championship was allocated Olympic qualification status by World Sailing to substitute for postponed events throughout 2020 and allow sailors the opportunity to confirm their spot in a safe and competitive environment. Everyone involved has been tested upon arrival in Oman and regularly throughout to create a secure bubble and allow the event to go ahead.

Ajay Narang, Chair of the ASAF Events Committee, said, “It has been very challenging for everybody to organise an event during this period but the organisation has put systems in place to make sure that sailors are safe and able to compete to qualify for the Olympics.

“Despite the challenges everybody has gone through, there has been thorough testing at every stage to ensure the safety of the sailors, coaches and officials so that the event can happen. We are very grateful to Oman Sail for organising this event in such a short timeframe and making sure the event is successful.”

All sailors, coaches and onsite management staff have passed rigorous COVID-19 safety procedures in order to enter Oman and will remain within Millennium Resort Mussanah for the duration of the event.