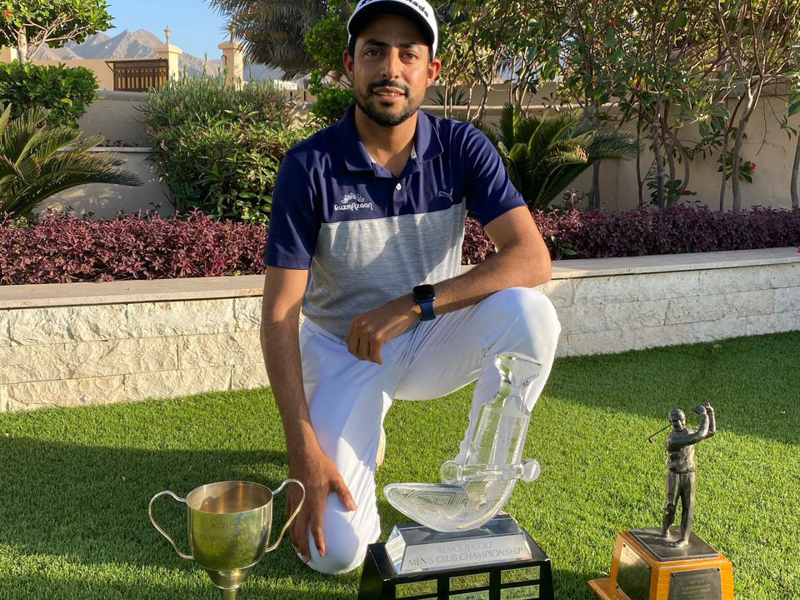 Azaan al Rumhy’s domination in the domestic clubs’ golf circuit this season was underlined when he clinched the title at the Ras al Hamra Golf Club recently.

Azaan’s treble is yet another feather in the cap of one of the best Omani golfers till date. The latest title at Ras al Hamra makes him the only Omani golfer in recent times to have won three club championships in a single season. The feat was possible this season as the club tournaments were held on different weekends.

Azaan stormed to victory at Ras al Hamra Golf Club by seven shots as he carded a two-day score of 150 (77 and 73).

Edwin Nast was runner-up with 157 while Darsh Pawani came third on countback after scoring 157.

Former national team player talented Rashad al Harthy took the fourth spot with 158. The club championship at the Ras al Hamra is the oldest in the country, having begun in 1971.

It was also the third Ras al Hamra title  for Azaan, who is also the leading national team player. His previous triumphs camein 2002 and 2006.

A delighted Azaan was ‘proud to have won it again, 19 years after my first title at the club’.

Speaking to Muscat Daily, he said, “It is always nice to win trophies. Frankly, it has been a great season as I won the Al Mouj Club Championship in November last year, followed by my title at the Ghala Golf Club championship in December.

“The Ras al Hamra event brings the curtains down on the 2020-21 season and to finish the season on a winning note is a great feeling.”

Prior to Azaan, Hussain Dad was the other Omani who had won the Ras al Hamra club crown three times.

Azaan said that in the past, dates of the club championships would often clash with each other leaving him with no choice than to opt for his favourite club – Ghala Golf Club – where he won a record nine times.

“Among the three club titles this season, I would rate my win at Ghala by nine shots as the sweetest as we had a strong and a large field including national team players ,” he said.

Looking ahead, Azaan said, “It is unfortunate that the coronavirus pandemic has caused the postponement of the GCC Golf Championships twice.

“It was initially scheduled to be held in December last year but was rescheduled to March. However, in view of the current pandemic situation, it has been postponed again until end of the year.

“I am happy to say that we now have a strong national team after the joining of Faiz  Mohammed Faiz.  Along with players like Ahmed al Wahaibi, Badr al Amri and Ahmed al Balushi, we are a much competitive group.”

With regional competitions on hold and domestic season over, Azaan, for now, wants to enjoy the rare distinction of club championships’ hat-trick by working hard on his game as he seeks more trophies next season.