12 divers come together to clean coral reefs in Daymaniyat 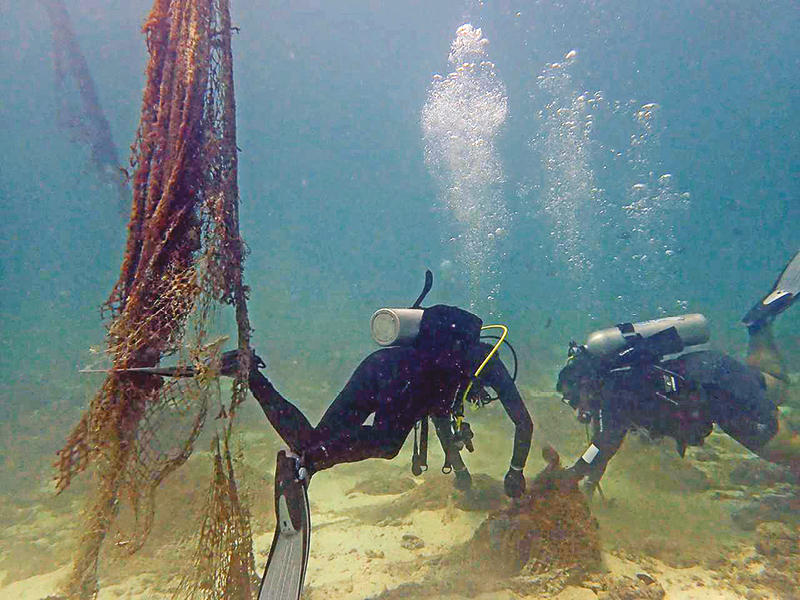 As part of its efforts to preserve the marine environment, the Environment Authority, in cooperation with volunteer diving teams, carried out two campaigns to clean the coral reefs in the Daymaniyat Islands in the south of Batinah.

Speaking to Muscat Daily, Issa al Yahmadi, director of the Environment Department in South  Batinah, said, “The department has carried out two campaigns to remove fishing nets stuck in the coral reefs in the Daymaniyat Islands in cooperation with the Blue Water Divers team and  Omanta Scuba Diving Academy.

“The cleaning drives were carried out on March 25 and March 27 for two hours, starting from 9am. About 12 divers participated in the drives removing 150m of trapped fishing nets and some other marine debris such as plastic items and cages.”

He noted that the campaigns’ objective – to rid the sea of pollutants and to preserve it – will ultimately help fishermen.

Through these efforts, the joint team also aims to spread awareness on the importance of preserving the marine environment in the community.

The campaigns called for the volunteer teams to participate in cleaning the coral reefs and beaches to protect the purity of Oman’s nature and keep it free from any pollution, which in turn will attract tourists to enjoy the picturesque landscape of the sultanate.

The campaigns also aimed to protect the wildlife. Specialists in the Environment Department of South Batinah governorate are enthused to continue with their efforts to clean Oman’s seas, besides sensitising fishermen about the need for keeping the sea clean.

“We hope fishermen abide by fishing laws. They shouldn’t discard unwanted nets into the sea. We will continue to organise  volunteer campaigns to preserve the Omani environment and protect it from any pollution,” said Yahmadi.