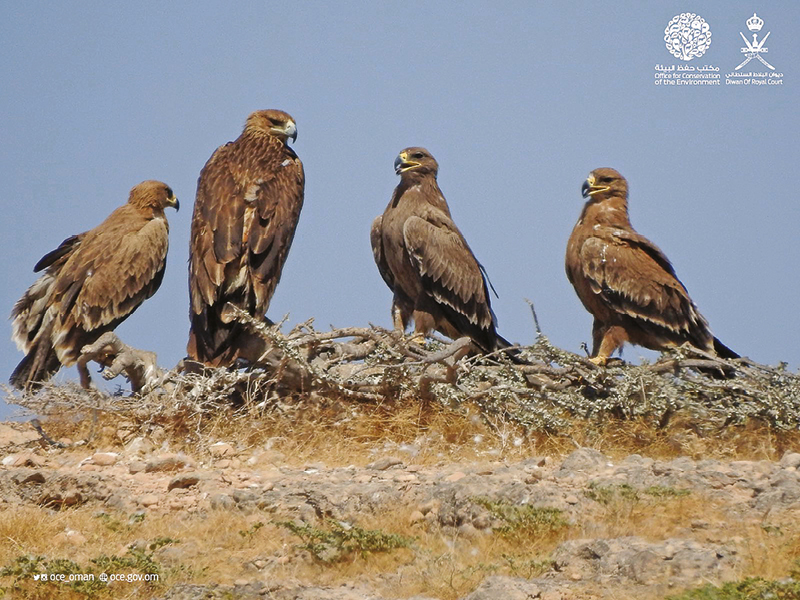 The number of steppe eagles have decreased considerably in Dhofar, a survey on the migratory bird that spends the summer in Central Asia and migrates with the onset of winter to southern Arabia, has revealed.

As part of its efforts to preserve wildlife, the Office for Conservation of the Environment (OCE) at the Diwan of Royal Court has concluded winter survey to monitor steppe eagles in Dhofar governorate.

‘The survey began in October 2020, coinciding with the winter migration of this bird of prey to southern Arabia. The specialised team recorded a remarkable decrease in the number of steppe eagles visiting Mardam Hakbet during the period (October – December 2020). The scope of the survey was extended during February 2021 to include areas near Al Safa Farm. Trackers have indicated that these areas are an important destination for steppe eagles,’ OCE stated.

The steppe eagle is considered an endangered bird globally based on the classification of the International Union for Conservation of Nature. The sultanate is considered a natural stopover as a large numbers of these eagles visit various locations in Dhofar which provides adequate food in the winter season.

‘In 2019, we recorded 500 steppe eagles in Dhofar. But they decreased to 80 in 2020,’ OCE said, adding the reason for the decrease in numbers is the lack of food including carrion (decaying flesh of dead animals).

In an ongoing research, OCE has installed satellite tracking devices on 13 steppe eagles to obtain important and accurate data and information.