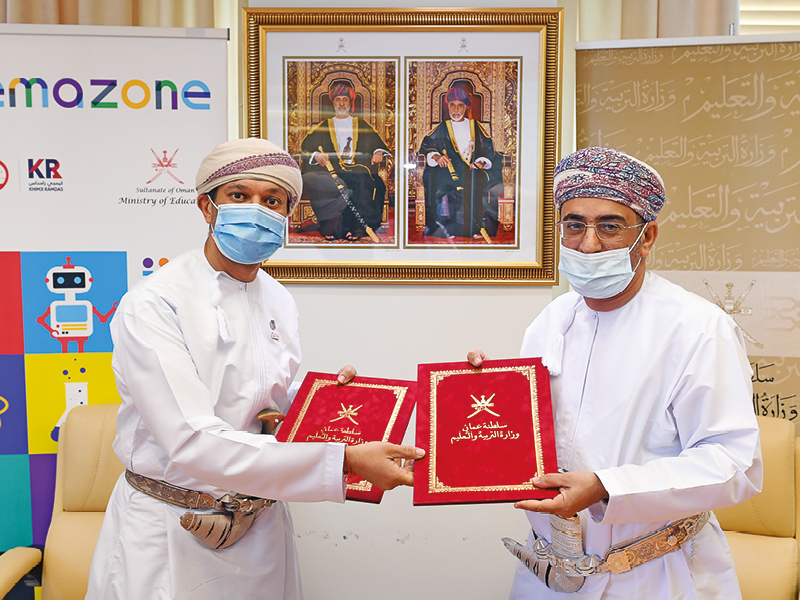 H E Dr Abdullah bin Khamis Ambosaidi, Undersecretary for Education in the Ministry of Education (MoE), signed three agreements on Tuesday morning, on the sidelines of the National Science Week 2021 at the ministry’s headquarters.

As per a statement, the first agreement was signed between the ministry, represented by the Centre for Career Guidance and Student Counselling, and the SMN Power Holding Company to support and finance the ‘My School Product’ project.

The agreement is for the implementation and installation of a sheltered house for aquaculture in Rashid Bin Al Waleed School for Basic Education (5-12) in Muscat governorate. Dr Abdullah bin Humaid al Yahya, chairman of the Board of Directors of the company signed the agreement.

‘The My School Product project contributes to instilling a culture of entrepreneurial work and achieving scientific and cognitive integration based on experimentation and application between the various curricula. It also contributes to building positive attitudes among students towards various specialisations and professions related to the field of agriculture and fisheries, by providing them with a set of skills and knowledge that is necessary in the Omani labour market in the 21st century,’ the statement said.

The second agreement was signed between the ministry, represented by the Department of Innovation and Scientific Olympiad, and the Ishraqa Foundation (the social responsibility wing at Khimji Ramdas) to support the ‘Stimazon Initiative’ for students of the sultanate’s public and private schools.

Anil Khimji, chairman of the Board of Directors, at the company signed the agreement.

‘This initiative comes as a complementary step to the role that educational institutions in the sultanate work on to inspire the next generation in line with the sultanate’s Vision 2040 and the aspirations of the modern world.

‘It also aims to employ modern technologies such as programming, robotics, 3D printing, virtual reality and electronics. The initiative also seeks to hone the basic skills of creative and critical thinking, design, and problem-solving among the emerging generation through learning by experience.’

The company implementing this initiative will take place in the Children’s Museum in Qurm, and the educational programmes will be virtual.

The third agreement was signed between the ministry and each of the Al Batinah Energy Company, Sohar Energy Company, and Al Alawi Institute for Human Resources Development.

‘The agreement came to organise a competition for 200 students from public and private schools from various governorates of the sultanate in the field of designing and preparing smart applications under the title ‘Emerging Smart Application Developers Prize’.’

The prize comes as a translation of the fruitful cooperation between the ministry and the private sector institutions, and aims to teach students important aspects in designing smart applications, improving personal skills, technological skills, and the skills required for their future jobs.

It also motivates them to enrol in specialisations related to technology and science fields, in addition to preparing them to participate and compete in regional and international competitions.

‘The prize also seeks to provide scientific solutions for many aspects in the various professions and businesses in the sultanate. This award will also provide training workshops in designing and preparing applications used in computers, tablets and smart phones, and programming. The prize will take place in a virtual training camp,’ added the statement.