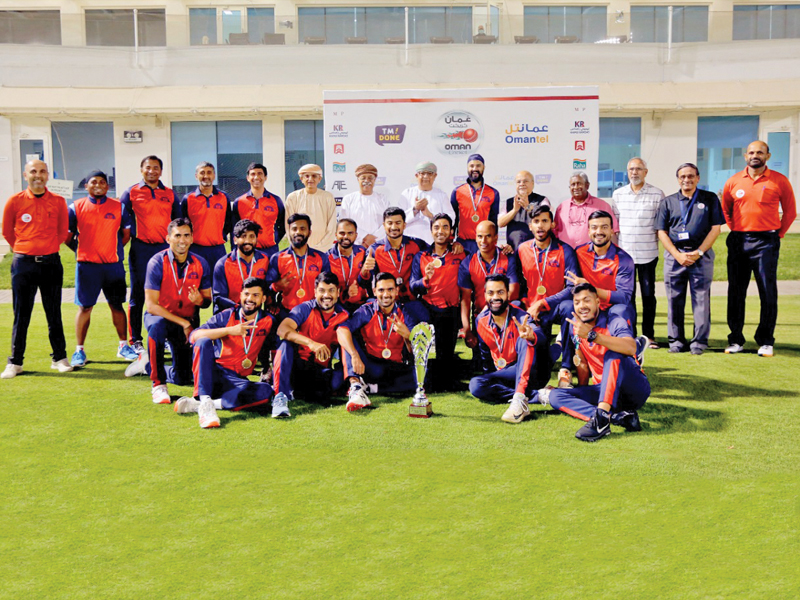 Less than a week after they had claimed the Premier Division (50-over-a-side) title, Muscat CT completed a grand double as they clinched the 2020-21 Oman Cricket Premier Division T20 crown at Al Amerat on Friday to bring the curtains down on the domestic season.

Playing their concluding game, Muscat CT, who were leading the table ahead of the game, defeated Al Turki NMC by 11 runs to end their season on a successful note.

Against Al Turki NMC, Muscat’s Sandeep Goud was the player of the match with an allround performance. Goud top-scored with an unbeaten 42 off 18 balls including five sixes as Muscat posted 179 for five. Shoaib Khan (39) and captain Jatinder Singh (33) were the other notable scorers. Jay Odedara bagged two for 26.

Al Turki fought hard but were restricted to 165 for seven.

Gustav Burger (30), Twinkal Bhandari (25) and Prateek Athavale (25) were the main scorers. Goud and Wasim Ali picked up two wickets each.

Speaking after winning the title, Muscat CT captain Jatinder said, “To win a domestic double is an achievement and I along with my team are proud of. Hard work and team spirit were the key to our success. “The twin

titles are an apttribute to our beloved Late Kanakbhai Khimji, who had been the guiding light for our team and Oman cricket for the past many decades.”

The skipper also thanked the team’s support staff for their ‘tremendous services’ during a challenging season due to the coronavirus pandemic.

Nadeem shines for IT Works

In the other match, Mohammad Nadeem’s unbeaten 45 led IT Works to a 27-run victory over AER. Nadeem’s knock came to the team’s rescue as they scored 109 for eight. Afzal Khan and Allan Gawdya bagged two wickets each. However, AER, failed to make a fight as they could manage only 82 for seven.

Shakeel Ahmad, the tournament’s leading wicket-taker with young Muzahir Raza at 16 wickets each, claimed two for eight and was ably assisted by Khawar Ali, who took two for 24.