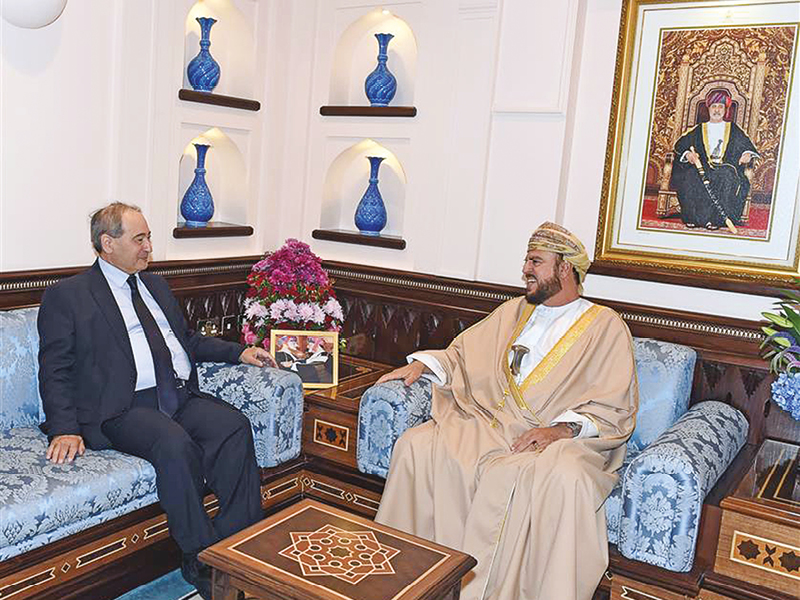 Sayyid Asaad bin Tarik al Said, Deputy Prime Minister for International Relations and Cooperation Affairs, and Personal Representative of His Majesty the Sultan, received in his office here on Sunday Dr Faisal Mekdad, Minister of Foreign Affairs and Expatriates of the Syrian Arab Republic, who is currently visiting the sultanate.

The two sides exchanged cordial conversations and reviewed the bilateral relations between the sultanate and Syria. They also discussed aspects of the existing cooperation between them to serve the common interests of the two countries and their brotherly peoples.

Peace and stability in the region

The sultanate and Syria held a round of official talks at the Foreign Ministry on Sunday.

The Omani side was headed by Sayyid Badr bin Hamad al Busaidi, Foreign Minister, while the Syrian delegation was led by Dr Mekdad.

The discussions also covered developments and efforts to establish peace and stability in the region.

The two sides exchanged views about various regional and international issues of mutual interest. They underscored the significance of dialogue as a means of finding solutions and enhancing security and stability in the region and the world at large.

An agreement for mutual waiving of visas for holders of diplomatic, special and service passports between the sultanate and Syria was signed by Sayyid Badr and Dr Mekdad.