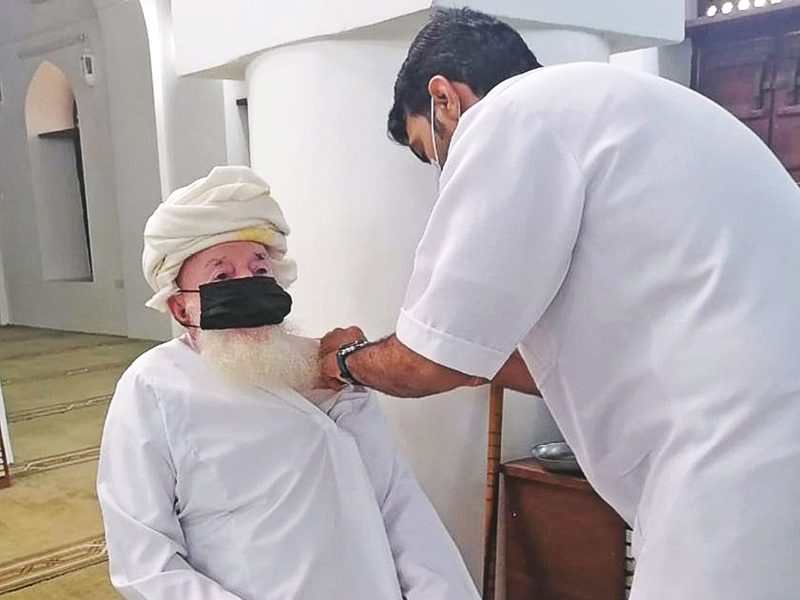 As the total number of COVID-19 cases in Oman crossed the 150,000 mark, H E Dr Ahmed bin Mohammad al Sa’eedi, Minister of Health, announced that the ongoing nationwide immunisation drive in Musandam will cover all citizens older than 18 years. Residents of the wilayat of Madha in the governorate will also be offered PCR tests for COVID-19 free of charge four times a year.

“The reason for including Musandam governorate in the expanded vaccination campaign is its geographical distance and the movement of a large number of people of the governorate. The campaign targets about 16,500 people. In the last two weeks, over 2,000 people have been vaccinated,” H E Dr Sa’eedi said.

He stressed that the vaccine will also be provided to teaching staff before the start of the next academic year so that students can return to schools.

H E Sayyid Ibrahim bin Said al Busaidi, Minister of State and Governor of Musandam, informed that the renewed efforts will help relieve the effects of the disease and return the economy and social life back on track gradually in a governorate where there is frequent movement of citizens through border points. He noted that the immunisation campaign is significant  in the current epidemiological situation in the governorate owing to its geographical location.

The renewed efforts have been launched due to the high number of cases in the sultanate, some governorates in particular where the number of patients admitted in hospitals with COVID-19 exceeds the risk indicator, and detection of cases of variant strains.

On Sunday, the Ministry of Health announced 1,665 new cases in the last four days, taking the total to 150,800. There were two deaths and 1,229 recoveries in this period. ‘The number of recoveries has increased to 139,100, while the number of deaths has reached 1,622,’ a ministry statement said, adding that the rate of recovery currently stands at 92.2 per cent.

“The Supreme Committee is  monitoring the situation and may take other precautionary measures,” H E Dr Sa’eedi said.