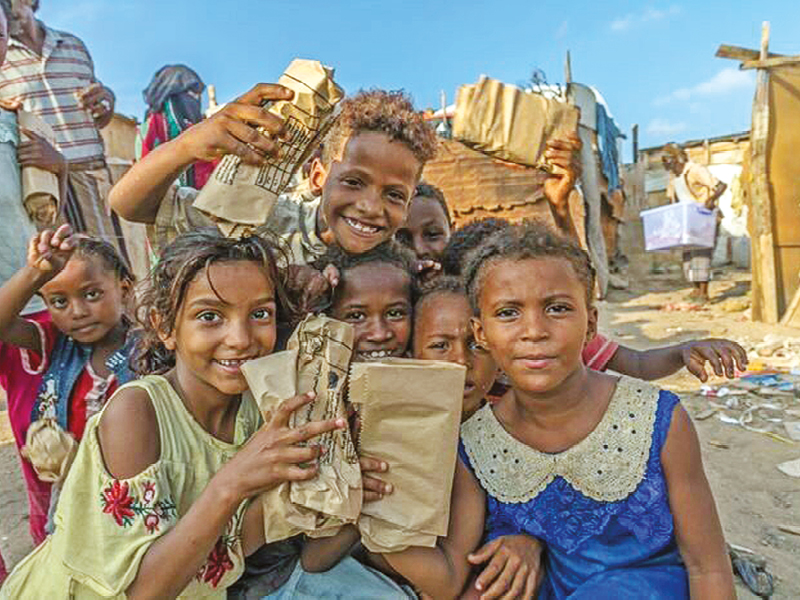 Even before fighting broke out in early 2015, Yemen was one of the poorest countries in the Arab world. Over five years of conflict has left thousands of civilians dead and 3.65mn internally displaced. Despite ongoing humanitarian assistance, 16.2mn Yemenis are food insecure.

It is estimated that in the absence of food assistance, largely from UN World Food Programme (WFP), this number would go up to 20.1mn.

According to WFP, the risk of large-scale famine has never been more acute with nearly 50,000 already living in famine-like conditions.

Oman has been at the forefront, politically as well as working on the ground, to provide all kinds of assistance to the people in Yemen.

Companies, particularly from Dhofar, continue to support and aid the humanitarian efforts in the neighbouring worn-torn country.

WFP has transported over 37,000m3 of medical supplies through Salalah to Yemen since 2019, including medicines, medical and laboratory equipment and personal protective equipment (PPE), a WFP spokesperson told Muscat Daily.

“These items were shipped by air, sea and land on behalf of humanitarian partners, such as the Unicef and the WHO, to support the Yemen emergency. WFP continues to support various humanitarian agencies in transporting and storing of items for the humanitarian response via Salalah. Salalah has proven to be a key logistics hub and an integral part of WFP’s supply chain network to assist the people affected by the conflict in Yemen,” the spokesperson said.

Being the logistics hub that provides global direct connectivity with ability to seamlessly handle both containerised and non-containerised cargo, Port of Salalah offers itself as an indispensable option for the humanitarian agencies to use it for their operations.

Mark Hardiman, CEO of Salalah Port Services, said, “The sultanate has been playing a significant role in providing relief to the ongoing crises in Yemen from a very early stage. With Port of Salalah’s demonstrated ability to handle and store a wide spectrum of cargo, we are honoured and humbled to be able to contribute to and support the ongoing relief operation in Yemen.”

He added that the setting up and development of this humanitarian hub has been made possible by the continued support of various stakeholders like the ROP, the Oman Charitable Organization, the Ministry of Foreign Affairs, Asyad, etc.

In 2020, Oman was used by WFP as a hub for air shipments directed to Yemen in response to the COVID-19 emergency.

“WFP transported items such as PPE, hand sanitiser, oxygen cylinders, ventilators and emergency medical supplies to Yemen from Oman on behalf of the International Organization for Migration, the United Nations Population Fund, the Unicef, the WHO and Oxfam,” the WFP spokesperson informed.

Salalah Mills is another company that in partnership with WFP is helping fight hunger and famine in Yemen. The company had signed a contract with WFP in 2018 to provide wheat milling service for supply to Yemen. About 500 tonnes of wheat milled at the factory was trucked to the war-torn country every day.

Although that contract with WFP is over, Salalah Mill continues to export food items to Yemen.

Ahmed al Dhahab, CEO of Salalah Mills, said, “We export some foodstuffs to the Yemeni people through local Yemeni agents. Food items include macaroni and flour.” The company’s exports to Yemen increased by 55 per cent compared to 2019.

According to Hardiman, Port of Salalah presently gives comprehensive support to the aid and relief agencies by providing handling and storage of commodities ranging from bulk grain, wheat flour, nutrient supplements, medicines and medical equipment and support vehicles like ambulances.

The agencies not only use the warehouses inside the port but also facilities in the Salalah Free Zone for its storage of ambient and temperature-controlled cargo. The WFP has also been instrumental in developing the concept using local mills to process imported wheat to wheat flour which is then shipped directly to Yemen.

“Activities like this and an inclination to source from local companies wherever feasible has also supported the economic development of the hinterland,” Hardiman added.