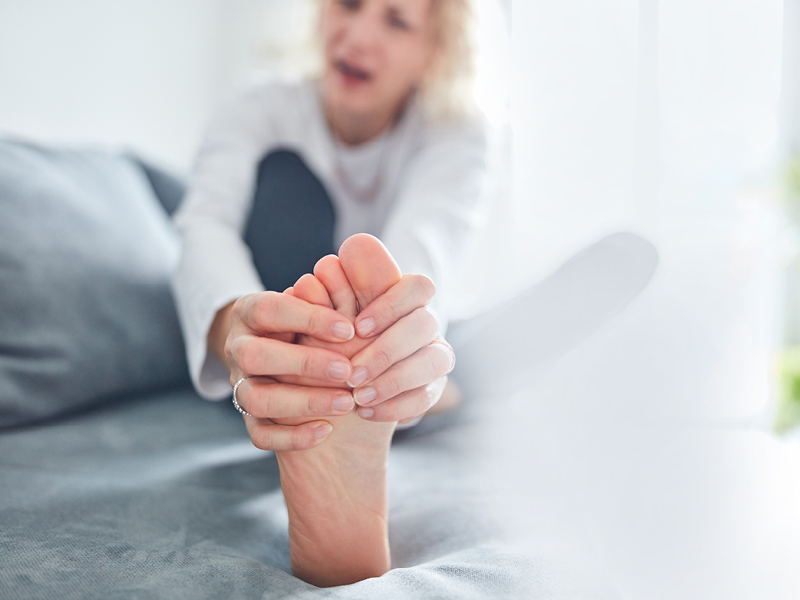 Every now and then you see a gentleman walk into the clinic limping cleary in distress. Your first thought is that the person has hurt himself in the foot. But no, the patient often denies any injury. When you proceed to examine him, you find that the big toe is swollen and painful to touch. Often hot to the touch, and inflamed red. Movements of the toe are restricted often due to pain. Just this is enough to make a diagnosis of gouty attack.

Gout is closely related to uric acid. Purines are a type of chemical compound that make up our genes. When purines are broken down in our body, uric acid is a by-product. Uric acid is present in the blood in a dissolved state. When it precipitates as a salt (monosodium urate) it forms crystal deposits in and around the joints or tendons. The sharp crystals irritate the tissues, especially those of a moving joint causing inflammation.

The most common joint affected is the big toe joint in the foot. Deposits of uric acid around the joints are called tophi and are seen commonly around the back of the elbow or heel. Rarely they may present around the knee or shoulder joints. Naked crystals may break off from the tophi, and incite an inflammatory response from the body resulting in pain and swelling.

Uric acid buildup in the blood and tissues can happen in two ways. Uric acid is normally excreted by the kidneys out of the body through urine. So if kidney function is affected or stopped functioning, adequate amounts of uric acid may not be eliminated leading to its accumulation in the body. Secondly, if production of uric acid is increased. This happens if one consumes purine rich food like organ and glandular meat (heart, kidneys, pancreas) or red meat like beef, mutton and veal.

Certain seafoods like sardines and tuna, and shellfish also contain high levels of purines. Beer consumption can also induce gout due to the presence of yeast. Though spinach and asparagus contain high amounts of purines, they are not known to cause gouty attacks.

At another time, there was a gentleman with swollen, red hot joints who I suspected was having a gout attack. On proceeding to educate him on the foods he needs to avoid, he stopped me and said, “I am a vegetarian.” He continued, “However, I am on a Keto diet, and since I don’t eat meat, I have been taking paneer (cottage cheese) in all my three meals.” No wonder he had a gout attack.

The presentation of gout involving the joint is similar to that of infection. In elderly patients, or those who are susceptible to infections, the doctor will order blood tests to rule out infection. Additionally the doctor may also check the level of uric acid in blood.

It is important to mention here that high uric acid levels are considered as a risk factor for cardiac disease. And therefore many cardiologists order tests for uric acid levels to make an accurate assessment of the patient’s cardiac condition. At the same time, it is not clear if medications to lower the uric acid levels will mitigate this risk to the heart.

Most likely, it is a surrogate marker for the lifestyle of the patient. Changing your lifestyle, especially food habits and doing cardio exercises will be more beneficial than taking medications to lower uric acid levels in such a situation.

In addition to this, the doctor will also prescribe anti-inflammatory medications. Rarely low dose steroid may be necessary if the patient is not responding to oral anti-inflammatories. It is advisable to drink plenty of fluids. More fluid intake will lead to an increased output of urine thus eliminating uric acid in urine.

Decreasing the intake or purine rich foods and beer will also help. Icing the foot, resting it and propping it up on a pillow will help control the swelling. In a matter of days the inflammation should subside providing relief.

Stress at work or otherwise can also induce an attack of gout. Stress relieving measures like listening to music, going out for a walk, meditation or taking a short vacation from work can be helpful as well.

The patient must continue the change in food habits even after the pain subsides as repeat attacks are possible. Frequent attacks of gout may damage the cartilage in the joint leading to chronic arthritis.

Consuming fruits and vegetables, in addition to meat can help the patient maintain a balanced diet. Consuming fruits rich in Vitamin C like lemons, oranges and berries can help control gout as well.

In case of extensive deposits, the tophi may need to be surgically removed from in and around the joints. Newer medical agents, called biologics (for eg: anakira and canakinumab) are under investigation for management of acute flare ups.