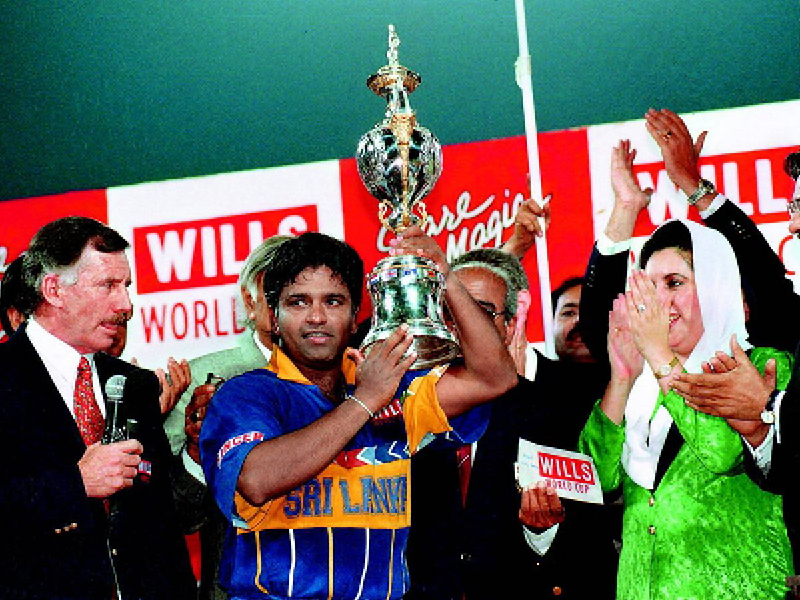 17 March, 1996 is a special day for every Sri Lankan who knows his/her cricket. It was on this day 25 years ago we won the Cricket World Cup at the Gaddafi Stadium in Lahore beating much fancied Australia in the final. Mark Taylor’s side were favourites to win or so everyone thought.

This day brings back a lot of golden memories and pride when I think about the final and how Sri Lankan cricketers played the whole tournament in 1996.

I will not be overstating if I say Sri Lanka changed the way one-day cricket was played then with our innovative style and approach, which was new to everyone.

We came to this tournament with just four wins out of the 20 World Cup games we had played since 1975 and nobody expected us to throw surprises at everyone.

I had the dual role of being manager of the Sri Lankan team and chairman of selectors for few years. We were responsible for finding a winning combination.

I must acknowledge that I had a very knowledgeable set of past cricketers in the selection committee who gave me a lot of assistance in putting together the best combination for the title victory in Lahore.

During that period, each member of the committee was so committed to the task that when one started to make a move everyone understood exactly why it was being made. That was the level of knowledge the other selectors had. I would like to offer my sincere thanks to them.

In 1995, Dav Whatmore and Alex Kountouris, who is the chief physio of the current Australian team, were introduced to the national team. I was there as a conduit between the players and these two gentlemen from Australia. Even though Dav was born in Sri Lanka, he had his schooling in Australia and went on to play Test cricket for Australia.  Alex was new but we formed the management committee of the team.

We made our start in 1995 in Pakistan where we beat them in Tests as well as ODIs by 2-1 margins.  We also had a very successful tournament in Sharjah. Later that year we went to Australia just before the World Cup where thankfully all the players got motivated and the team got bonded together and played brilliant cricket.

Our christening was in Perth as usual, which was marred by ball-tampering allegations. We were later exonerated. Despite the odds, we had a very good tour of Australia. The boys started to believe in themselves.

The tactics were laid down in Australia for the forthcoming World Cup. Our success largely depended on our game plan of being aggressive in the first ten to 15 overs. This went onto change the way ODI cricket is played today.

Our strategy [pinch-hitting] took everyone by surprise. When the World Cup was in progress, all the other teams were still getting to know what we were doing. But before they could really know and counter our moves, the tournament was over and we were World Champions!.

Celebrations went on for so many months. Now, after 25 years of that monumental achievement, so many memories are flooded and they are still afresh.

Although, I am far away from Sri Lanka, I still think of those good times when we had a brilliant team.

I can still remember that day before the World Cup final in Lahore when everyone was talking about the dew factor. I and team captain Arjuna [Ranatunga] went out to the ground the night before the final and nobody knew about it.

We had gone out just to see the dew and saw that there was a lot of dew on the ground and we knew that if we bowled at night we were going to find it difficult defending a total. So it was decided that if we won the toss we would bowl first.

In Arjuna, we had a captain, who was fearless and aggressive. A captain who wasn’t afraid to take decisions.

He was well backed up by master tactician Aravinda [de Silva], who was his deputy. We also had the fortune of having a set of brilliant cricketers around who knew exactly what to do when things were not going well for the team.

I offer my sincere thanks to the whole team and to the Board at that time, which was led by Ana Punchihewa, for the wonderful memories that are coming back even after 25 years.

I am glad to hear about the Silver Jubilee celebrations planned in Sri Lanka, but unfortunately Dav [Whatmore], Alex [Kountouris] and I will not be able to attend due to the current COVID-19 situation. I feel bad about missing this event but I hope the other members of the title-winning team have a wonderful time reliving the golden memories of 1996.

(The writer is a former Sri Lankan captain who led the country to their first Test series win in 1985. The 68 year old played 24 Tests and 79 ODIs and is currently the chief coach of Oman team since 2015)