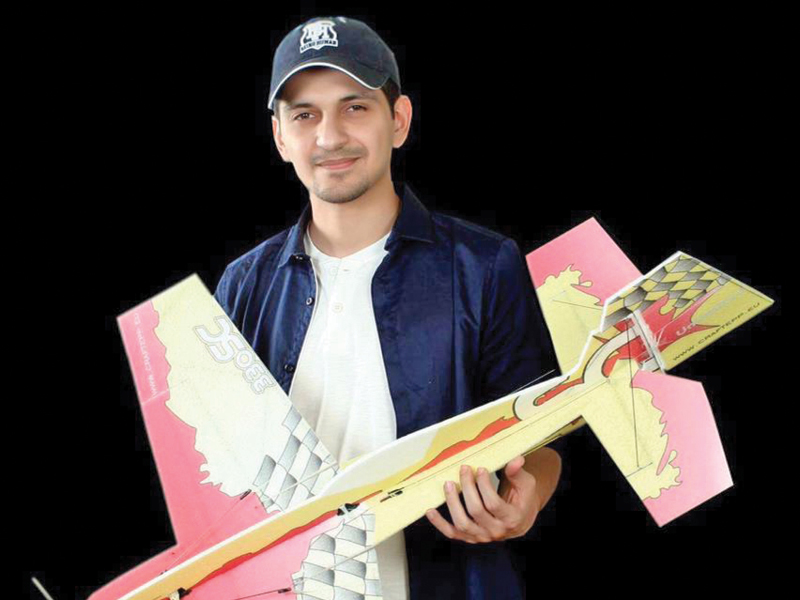 Mohammed Taleb al Raisi, 29, from Muscat governorate, is an amateur creator of radio-controlled aircraft since he was 12 years old. His aircraft designs are fabricated from simple household items such as wood, cork and other recyclable items.

Speaking about his passion to Muscat Daily, Raisi, said “My elder brother had gifted me a wireless plane when he returned from a trip abroad. Since then, for 17 years, I have developed a love for creating wireless aircraft from recyclable material. The ones that I have made are different from drones as they weigh not more than 150g.

Raisi has been studying business administration and marketing, something that seems far removed from his hobby, but his love for wireless aircraft keeps him busy in his spare time. He uses simple materials to make wireless aircraft, such as cork, paper, and wood, besides other recyclable materials that encapsulate electronic devices.

“I use recyclable materials to make my aircraft to spread awareness on the importance of preserving the environment. I recently made a Boeing 737 wireless plane and painted it in the colours and logo of Oman Air, in support of it during the COVID-19 pandemic,” Raisi said.

Talking about the challenges he faces, he said, “Making wireless aircraft is an expensive affair. I make these aircraft manually and some of them take months to complete. Each weighs not more than 150g and are around 1.5m long. They are created just for entertainment and I fly them only in areas permitted by the concerned authorities.”
He further disclosed that he has shared his hobby and skills via talks to interested youths as part of courses on the method of making wireless models in universities and schools in the sultanate.

“I hope to some day establish an Omani company specialised in producing games for children because I strongly believe in the importance of play in learning. I also hope to participate in the next World Wireless Aircraft Championship and achieve the first position. I believe, I can achieve this with forbearance and sustained hard work.