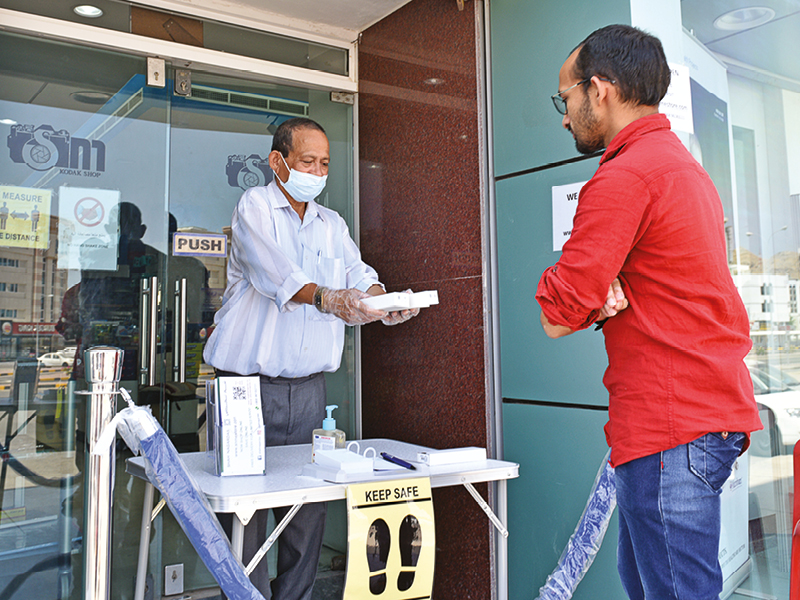 As the number of new COVID-19 cases increases in Oman, all should remain vigilant and responsible in order to win the war against the virus. This is a call from officials as well as concerned citizens and residents who are calling on all to continue to take care and not assume that the virus has miraculously vanished saying all should be responsible to curb the spread further.

H E Dr Ahmed bin Mohammed al Sa’eedi, Minister of Health, called upon all target groups to take the vaccine to protect themselves and their families, urging everyone to adhere fully to the preventive procedures such as wearing mask, physical distancing, avoiding gathering, and maintaining hand hygiene.

“Within a period of less than two months, the number of intensive care patients increased and these units have returned to be under constant pressure as deaths are continuing. Everyone must realise and take responsibility,” he said.

On Monday, the Ministry of Health (MoH) announced 556 new cases – the highest daily count since October last year – taking the total to 147,423. The number of deaths reported during the same period is one, while the number of those who have recovered increased by 341.

‘The number of recoveries has increased to 136,770, while the number of deaths has reached 1,609′, an MoH statement said.

‘As of Monday, a total of 268 patients were admitted in health institutions while 86 patients were in the ICUs,’ the ministry said, adding that the rate of recovery is now at 93 per cent.

Concerned citizens and residents have also been calling out for preventive measures.

“Of late, people have not been strict in practising social distancing. I have seen some people shaking hands and hugging each other too. We have to show the sense of responsibility towards each other. There is a need for us to remind each other that the virus still prevails and this is evident as we see the number of new cases rising again,” Naser al Jahdhami, imam of a mosque in Muscat, said. L Thomas, a resident from Ruwi, said, “I have seen people in various places acting as if the pandemic is over. This is not being responsible. The whole world is still under pressure and Oman is of no exception. We have to teach ourselves as how to prevent ourselves. We should follow the guidelines in a proper way.”

Worldwide too, there is a call for being responsible towards following health precautions. António Guterres, Secretary-General of the United Nations, recently said, “The virus is spreading, the danger is growing, and our health systems, economies and day-to-day lives are being severely tested. But the spread of the virus will peak. Our economies will recover.

“Until then, we must act together to slow the spread of the virus and look after each other.”

Oman on Monday held a virtual meeting to follow up the implementation of the National Campaign for Immunisation against COVID-19 under the chairmanship of H E Dr Sa’eedi.

The meeting discussed the latest developments on the immunisation programme and the obstacles in reaching the target groups, notably the irresponsible and false information disseminated through social media platforms, making the most vulnerable groups reluctant from receiving the vaccines.

Dr Sa’eedi stressed the significance of reporting any side effects – if found – after being vaccinated, highlighting that no severe complications were detected.