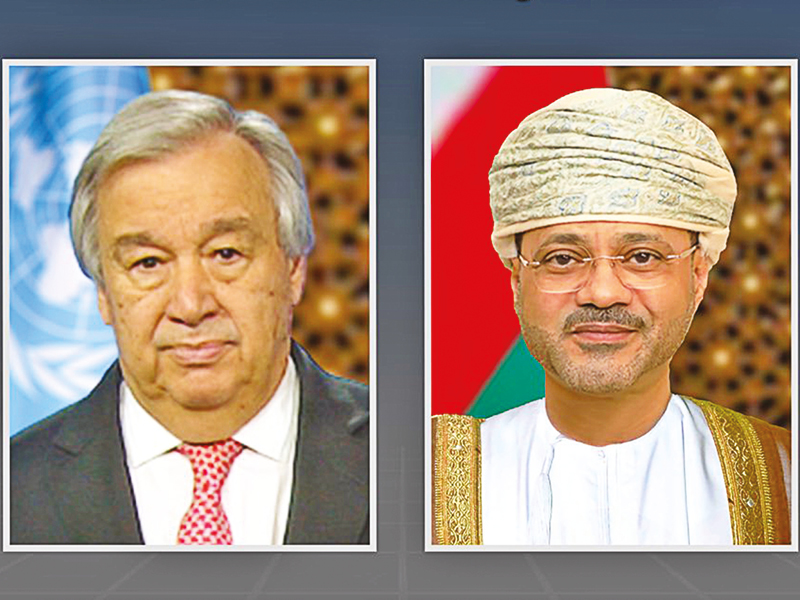 The conversation dealt with developments in the Yemeni crisis and efforts to end the war. Emphasis was laid on the immediate halt of military operations and the realisation of peaceful solutions through direct dialogue among the disputing parties in a manner that allows entry of humanitarian aid and supply of essential goods for the Yemeni people.

The minister and the UN Secretary-General both reiterated their support for the efforts and the significant role of Martin Griffiths, UN Special Envoy to Yemen. They emphasised the need to enhance his efforts, as well as efforts of the US to put an end to the war, resume political negotiations and achieve the aspirations of the Yemeni people for security and stability.

Earlier this month, Oman affirmed its continued support for the Yemeni people by providing humanitarian aid to alleviate the crisis in the war-torn country. In a speech delivered at a high-level event in New York on the humanitarian crisis in Yemen, H E Dr Mohammad bin Awadh al Hassan, the sultanate’s permanent representative to the UN, called for an end to the war in light of its catastrophic effects and restated Oman’s support to UN’s call for peace.

“The sultanate backs UN Secretary-General’s plea to implement a ceasefire and halt all offensives,” H E Hassan said. “Our support for Yemen will continue at various levels,” he said.

H E Sayyid Badr has hosted a series of high-level meetings recently in Muscat alongside GCC counterparts as well as a meeting with Tim Lenderking, Special Envoy of the US for Yemen, on February 5.

H E Sayyid Badr and Lenderking discussed the situation and the efforts exerted to end the ongoing war. They also reiterated the importance of addressing the humanitarian crisis and supporting efforts to achieve a political settlement among all Yemeni parties through constructive dialogue and peaceful negotiations.