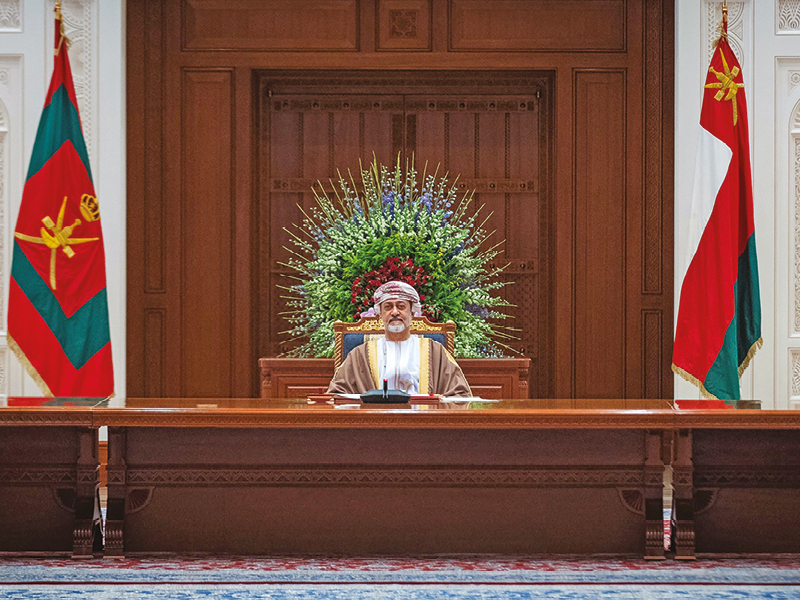 His Majesty Sultan Haitham bin Tarik presided over a meeting of the Council of Ministers at Hisn al Shumoukh Palace on Tuesday.

At the outset of the meeting, His Majesty the Sultan thanked and praised Almighty Allah for the bounties and riches He has bestowed on Oman and its noble people.

Then His Majesty the Sultan reviewed the position of the national economy and the challenges posed to it due to the slump in oil prices and the ensuing rise in fiscal deficit and general debt. These challenges ran alongside the impact of measures that had to be implemented due to the prevalence of the COVID-19 pandemic in early 2020, when the sultanate took quick action through a set of precautionary and preventive measures that overshadowed economic growth in general.

His Majesty the Sultan pointed out that as part of steps undertaken by government departments, an Economic Stimulus Plan (ESP) aimed to achieve high growth rates, as per Oman Vision 2040, has been endorsed.

His Majesty the Sultan reaffirmed that the ESP covers a variety of incentives and initiatives, such as cutting down taxes and fees imposed on companies that are actively engaged during 2021 in economic diversification sectors such as industry, tourism, logistics, agricultural and fisheries resources, and mining. The incentives also include cutting down Income Tax for small and medium enterprises during 2020 and 2021, in addition to the reduction of the lease value of land in the Special Economic Zone in Duqm and industrial estates till 2022.

Other procedures related to the ESP include incentives to spruce up business and investment through facilitation of entrepreneurship, offering prolonged residency for a number of foreign investors in line with terms and conditions to be announced later by the Council of Ministers, as well as incentives related to the labour market to generate employment opportunities for Omani job seekers.

His Majesty the Sultan, in particular, expressed his keenness on the steps undertaken by the departments concerned to address labour market developments.

His Majesty the Sultan also stated that the Council of Ministers has endorsed the National Urban Development Strategy (NUDS). He pointed out that strategy is a prime enabler for the realisation of Oman Vision 2040. It is the first long-term strategy that orients urban development in a manner that strikes a balance between socioeconomic development and the environment over the next 20 years. His Majesty the Sultan informed that the NUDS has been the product of wide-scale institutional and societal partnership.

The NUDS is sufficiently flexible to accommodate new developments and future challenges. It charts out a general framework of urban development policies, both at a countrywide level and at the level of each governorate. It also introduces investment programmes and development projects across different sectors.

During the meeting, His Majesty the Sultan touched on the latest developments of COVID-19 and the concerted efforts undertaken by the government to provide vaccines and make them available to different segments of society. His Majesty the Sultan commended these efforts and underscored the need to accelerate the pace of providing vaccines to the maximum number of citizens and residents. He also laid emphasis on maintaining the ongoing public awareness drive and applying precautionary and preventive measures against the spread of the pandemic.

On the occasion of International Women’s Day, His Majesty the Sultan expressed his sincere greetings to women in Oman and in all parts of the world.

In this context, His Majesty the Sultan commended Omani women’s accomplishments as they attend to their families’ needs and the upbringing of their children, while simultaneously performing the tasks entrusted to them in public life.

His Majesty the Sultan reiterated the great attention accorded to women by enabling them to shoulder responsibilities in the nation-building process. He noted that women in Oman have proved their mettle in this regard.

Speaking about regional and international relations of the sultanate, His Majesty the Sultan reviewed Oman’s continuous cooperation and its support for all efforts made to establish security and stability for all countries and nations of the world.