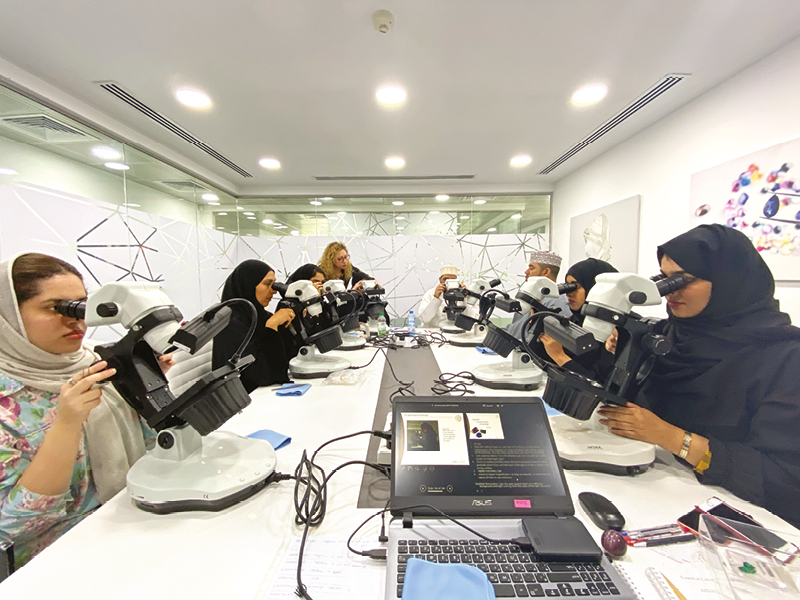 The first graduating class of professional diamond graders of the first and only all-inclusive gemology institute in the Middle East received their degrees in December 2020. The Gulf Institute of Gemology (GIG), operating from Bait al Reem in Al Khuwayr, opened in September 2019 and aims to be the hub of gemological knowledge in the region. The institute’s diplomas are internationally recognised owing to its membership to CIBJO, the World Jewellery Confederation that describes itself as the ‘UN of the jewellery business’.

GIG’s operations fall into three broad functions – a gem lab, a research department and education – all with the objective of ‘assisting you with your everyday gem challenges’. “What we do is identify and grade any kind of gem material, and also teach how to do it,” said Fabio D’Amico, CEO of GIG. “We use international systems, so any work or service we provide is of international standard. Any kind of document and all students coming out of our institute can be used and can work in any part of the world.”

‘We are like a referee in a football match’

He would have us believe this can only be done by gemology institutes such as GIG, which in D’Amico’s words are ‘guardians of the industry’. “We are not only for the final consumer, but for the retailers and wholesalers too. We speak for the entire trade. We are like a referee in a football match. Everybody can rest assured with our guarantee.”

Asked how an intangible quality such as rarity helps a GIG client eager to know the price of a gem, D’Amico reverts to the football referee analogy. “Our customers are not only final customers; they are also retailers and wholesalers. And the price of a stone for a wholesaler is different from a retailer. Since we have to take care of all of the trade, we will not tell the price.

It will be incorrect of us. We only tell them about the rarity of the stone.”

While rarity can mean different things for different stones, for diamonds, the measure of rarity is indicated by four ‘C’s. Colour, clarity, cut and carat weight. For the first three ‘C’s, there are scales, while carat weight is a number. GIG’s report for any stone a client may want evaluated reveals the grades for colour, clarity and cut, besides the carat weight. With this report, clients match the position on the scales for each ‘C’ for an indication of its rarity, and consequently an estimation of its price.

Explaining how they grade stones, D’Amico said gemologists derive information from the interaction between the gemstone and light. “We analyse gemstones using the latest spectroscopic techniques – micro-Raman, Fourier-transform infrared and more – to derive information about their chemistry and crystallinity. Conducting these studies help identify the materials and treatments, and distinguish between natural stones and synthetics.”

Varying in duration from five days to two months, GIG has courses on identification and grading of diamonds and coloured stones, and programmes for jewellery, including jewellery design using CAD/CAM. “We cover the entire process involved in our industry – from extraction from mines to the final consumer passing through the process of how to make jewellery,” D’Amico informed. In keeping with the times, the institute now offers several online courses.

Graduates of institutes such as GIG have careers as gemologists, lab analysts, jewellery retailers and wholesalers, auction house experts, business managers, designers, diamantaires and more. GIG’s courses are open to all applicants older than 18 with a high school diploma. While enrolment currently requires fluency in English, starting April, the institute will offer courses in Arabic too.

He describes the staff at GIG – eight in all including Italians such as himself, a Greek and Omanis – as among very few professionals in the world qualified for this work. “To be a gemologist at a high level, you need a lot of experience, and good relations and links. We have experience of running such institutes all over the world.”

Having worked as in-house gemologist for the Italian luxury brand Bvlgari’s gem laboratory and education manager of the California-based Gemological Institute of America (GIA), he was CEO of the Gemological Education and Certification Institute in Milan before joining GIG in 2019.

“There aren’t many institutes like GIA and GIG in the world – less than ten,” he informed.

As for why the sultanate was chosen over the other Gulf states to open GIG in Muscat, D’Amico said, “Because Oman was the smartest country in the GCC to understand and plug the gap.”

In his experienced observation, gemology of today is different from what it was five-ten years ago. “Now we have a lot of synthetic materials, including diamonds. Man can create and grow diamonds in a laboratory.”

While the price difference between a natural diamond and a lab-grown one can be dramatic – 50 per cent less for the latter – the quality and brilliance of the two are the same. “They have the same optical, physical and chemical properties because they are built of the same material. If you look at them, there is no difference. The only difference is who made it? Mother Nature or man. But we can tell the difference.”

That explains why GIG proudly claims in its mission statement that it’s gaining trust one gem at a time.