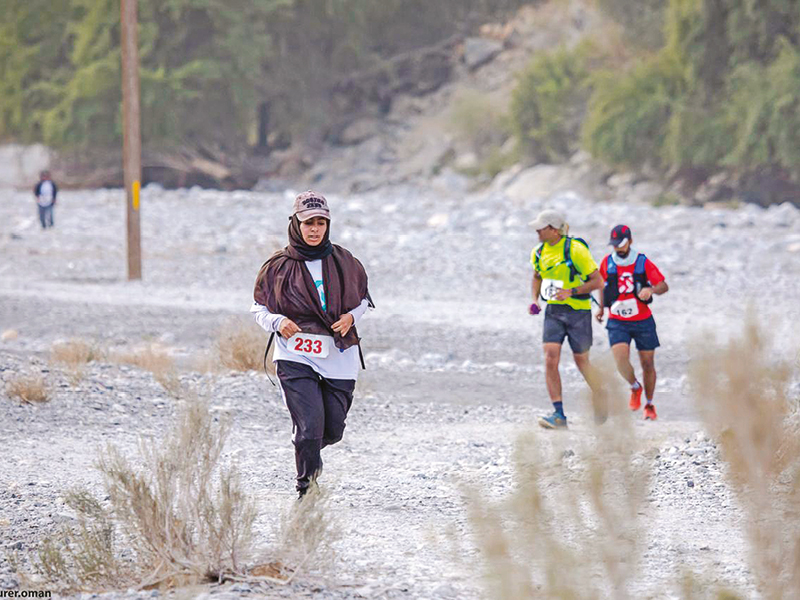 Trail running is no mean feat and covering 50km under nine hours is a rare achievement for a sportswoman in the sultanate. Suad al Nasibi, a student and an adventure enthusiast, completed the 50km trail and won the recently organised Himam Trail Run in Dakhliyah.

The trail began at Bait al Rudaydah in Birkat al Mauz, proceeding to Seeq Village in Jebel Akhdar, and returning to the starting point. Suad won the first place in the women’s category by covering the distance under nine hours.

The inaugural Himam Trail Run, with the local Golden Tulip Hotel as its Gold Sponsor, was an initiative under the umbrella of Nizwa Club. The run aimed to provide a competitive atmosphere for all, where experienced runners attempted personal best timings and podium places.

Speaking to Muscat Daily, Suad said, “I have gained experience on how to pace the 50km race and that has been a big learning for me. Now, I don’t go too fast at the beginning and slow down towards the finish. I  maintain a balance between going at a fast pace and slowing down. It is a very big achievement for me to successfully cover the 50km distance in under nine hours.”

The ongoing pandemic affected her preparations, but with determination and persistence, she found a way around it, Suad said.

“I trained daily running 5-15km in preparation for the race,” she said.

“I did this for multiple reasons. First of all, to improve my level compared to last year. Second, to support Omani women who are interested in trail running; I would like to inspire them with my efforts. But most Omani women don’t practise any sport, so we are trying to educate them.”

“In 2019, I participated in the Al Mouj Marathon and got 50th place after covering 21km in two hours and ten minutes.”

She added, “I dedicate my victory to Omani women and invite them to practise sports. I will continue to represent the sultanate in local and international competitions to promote Oman as a tourist destination and raise high the sultanate’s flag.”