His Majesty’s Cup football final: All set for Summit Clash 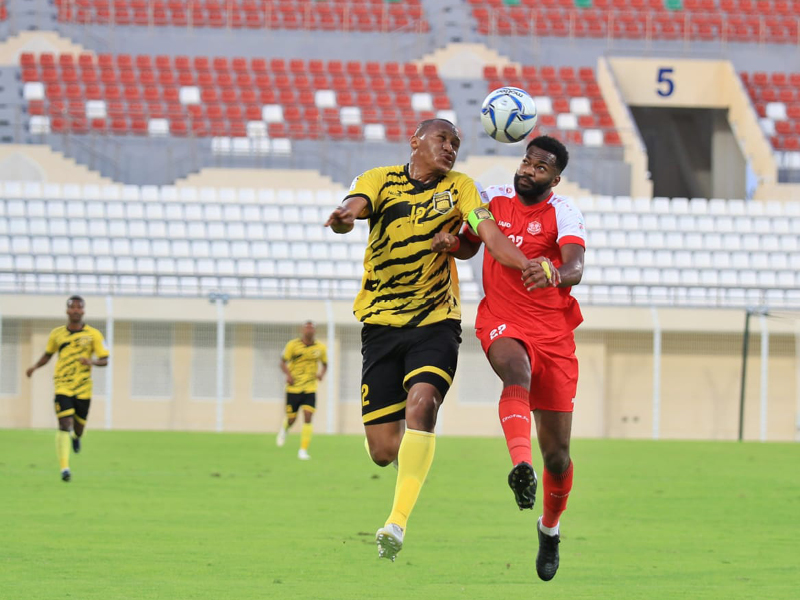 Four years ago in 2017, Salalah giants Dhofar were on the verge of winning a historic domestic double. Having won the Omantel League crown, they were the favourites to win the His Majesty’s Cup crown that year. But, their dreams of a double crown were dashed by Al Suwaiq, who  turned out to be their party-spoilers under Iraqi coach Hakeem Shaker.

Fast forward to 2021 and Dhofar are on the verge of another historic feat and, once again, standing in between the nine-time HM’s Cup champions and their bid for a record tenth title, are Shaker’s Al Suwaiq.

Will Shaker, who had turned Suwaiq’s campaign in 2017 from near disaster to glory with their third HM’s Cup title repeat his heroics or will Dhofar under former national team coach Rasheed Jaber clinch their record tenth title? The answers will be known on Sunday when both the teams face-off in the summit clash of the coveted HM’s Cup Football Championship at the Sultan Qaboos Sports Complex (SQSC). The match, which will be played behind closed doors, kicks off at 6.45pm.

Dhofar have been in great form under Jaber and are unbeaten this 2020-21 season. They are currently second in the Omantel League, trailing Seeb by just two points after ten rounds with eight wins and two draws.

Dhofar’s march into the HM’s Cup final have been impressive, after the defending champions began their campaign with a bye into last-16. The holders beat Rustaq to book a spot in the double-leg quarterfinals, where they trounced Al Mussanah 5-0 (aggregate scoreline) and then overcame their biggest challenge by edging past Omantel League champions Seeb in the semifinals (2-1 aggregate).

On the other hand, Suwaiq had a nervous journey to the summit clash as they fought back to down Al Ittihad in the semifinals (3-2 aggregate) after overcoming Ibri in the quarterfinals in a penalty shootout.

Suwaiq had edged Sohar 2-1 in a last-16 match after beginning their campaign with a hard-fought win in a penalty shootout over Al Bashayer. But the early games in their HM’s Cup campaign were without former Iraq national team coach Shaker.

Speaking at the pre-match press conference at the Oman Football Association (OFA) headquarters on Saturday, Shaker, who led Suwaiq to their last HM’s Cup title triumph in 2017, said, “Dhofar are a much different side today. They have a majority of players in the national team and have an experienced coach. They are going to be a tough team to beat but I have the confidence in my boys. I think we can overcome the challenge.”

Dhofar who share the record of nine HM’s Cup titles with Fanja are eyeing two records on Sunday.

A victory will not only give Dhofar a historic tenth HM’s Cup crown but will also make them the only club to have the highest number of domestic titles – domestic league and HM’s Cup.  With 11 top-flight league honours, Dhofar are ahead of Fanja, who have nine titles.

With a illustrious history in the competition, Jaber knows that his boys have the advantage of experience against a rival, who won for the first time only in 2009 and then in 2013 before their third in 2017.

Speaking ahead of the final, Jaber said, “We began our campaign with a mission to enter the final of all the domestic tournaments. The win over Omantel League leaders and defending champions Seeb in the semifinals was satisfying. We are a step away from a historic tenth HM’s Cup title. We hope to achieve it tomorrow. Suwaiq are a very organised team and we will have to be at our best to get past them.”

Jaber said that ‘only small technical details will make the difference in the final’. “The team which makes less mistakes on the pitch is likely to be the winner,” he said.

Dhofar and national team goalkeeper Faiz al Rusheidi said, “We are ready for the final and we all know that it would be a milestone tenth crown.”

On the other hand, Shaker, who is having his third stint in Oman, said “Though Dhofar is the favourite, I know my boys have the potential and the skills to upset them.”

Shaker said there is a ‘lot of difference’ between the final in 2017 and on Sunday.  He said, “The Dhofar players are much more experienced and playing at the top level. They also have experience of winning more titles since 2017. My team is much
different from the one that won the title. I have worked hard over the past couple of weeks and I am hopeful of a good result.”

Essam al Subhi, the Suwaiq striker, who scored both the goals in the return-leg semifinals against Al Ittihad said, “Our team is in a good shape for the final. HM’s Cup is the most prestigious event and I along with my fellow teammates are proud to have reached the final. We will give our best tomorrow.”

H E Sayyid Saud bin Hilal al Busaidi, Minister of State and Governor of Muscat, will be the chief guest and award the trophy in the presence of H H Sayyid Theyazin bin Haitham al Said, Minister of Culture, Sports and Youth, and other top officials.