Art is a life companion 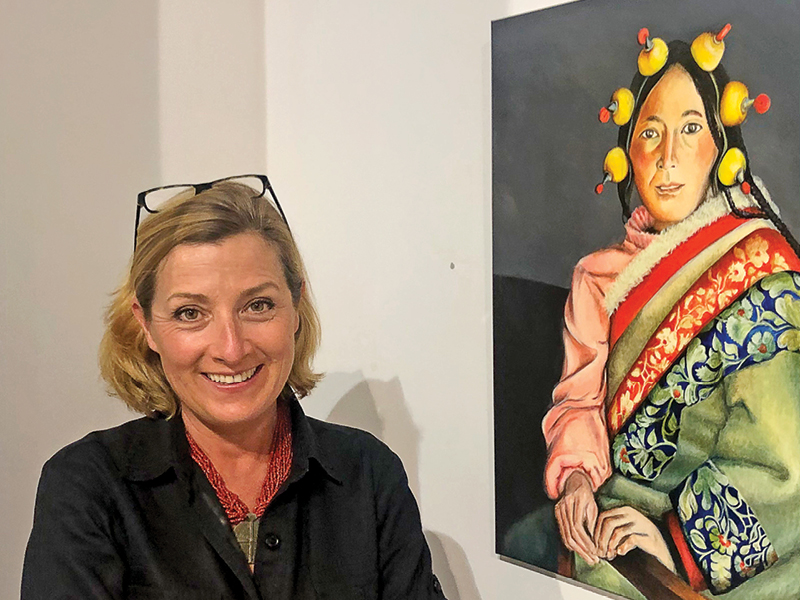 Juliette Lotthé de Thomson, French artist in Oman, is more comfortable creating a series of paintings on a common theme that she feels strongly about rather than making standalone canvasses that convey a story on their own. However,  she believes that art is a life companion, especially during difficult times.

Juliette, whose solo exhibition – Invitation Au Voyage – was on at the Art & Soul Gallery, in Water Front Mall, Shatti al Qurm for the past fortnight, was thrilled about an exciting two weeks. “It was my 3rd solo exhibition and this one in a brand new gallery, a brand new mall, an extraordinary place overlooking the sea. The whole event was decided quite quickly, so thanks to the professional staff of the gallery who were able to pull it in just a few days,” she said.

Reflecting on her efforts, Juliette said, “The first step was selecting the paintings to show, and I was a bit sorry bit not to have anymore Omani pieces – they are the ones that sell quickly – but many pieces about the world, faces from around the world, and with all the travel restrictions, we thought this would be a perfect theme. ‘Invitation au voyage’ is what it means, an invitation to travel, at home for now, a bit like the new concept of ‘staycations’.”
An accomplished artist who loves to paint on various media, including wood and linen canvas, in addition to more classic canvases, Juliette asserts that often she works by series, and that’s why she groups her paintings by themes, like praying mills, puppets, masks, etc.
The tough part was not having a proper opening, due to COVID-19, she said, adding, “A vernissage is such a special time, there is a true festive side both for the public and for the artist. But I was absolutely stunned by the number of visitors, from all over the world, expats and locals. And families with children, the younger were able to enjoy, too. At the moment, not many cultural outlets are open, so a visit to a gallery is a good idea.”

Interaction and introspection
Juliette says, the part she enjoys the most is sharing with visitors as it gives her an opportunity to note which paintings are liked the best and why. Some also shared their own art with her while she also got to meet many young aspiring artists and listen to their paths and life stories.

“There are many talented, young women and men here, it’s quite incredible. They are very unique in what they do and explore new artistic paths. Very impressive, indeed! I loved being able to encourage the youngest visitors to to pursue their passion, and work hard towards their goals. Art is a life companion, especially in difficult times, like the one we are living right now. You are never bored and never alone, and art helps relieve the stress and anxiety,” she told Muscat Daily.

The exhibition which concluded yesterday included a series of 8 paintings of African slaves brought by the Portuguese from Angola to Brazil to work in coffee plantations. Alberto Henschel – German/Brazilian official crown photographer- took (black and white) pictures of those slaves, deliberately not wanting to show their condition but rather having them pose in the most classic way of portrait photography of that time (late mid 19th century). His approach was evidently innovative and groundbreaking, and was the starting point for her work, she said, pointing out that the background of each painting depicted representations of coffee plants, botanicals prints of the same era, as a reminder of the reality of their condition.

About naming a series, Juliette says the task is the same as naming a child. “You want to do that right, you want the name to reflect in part what you are and what the child brings. What he/she is and what he/she might be. It’s about closing the chapter of that ‘pregnancy’, those paintings the artist has carried in him/her for months or years, opening the door of the after, letting go, knowing that the work now exists. It’s a christening, it’s like opening up a fizzy beverage on the hull of a boat and watching it go onto the wild ocean.”

This series on display was named ‘Lei Aurea’ (the golden law), the law that, 132 years ago, abolished slavery in Brazil in a statement comprising just 18 words. One of the shortest laws in history, yet one of the most meaningful ever,” she observed.

Juliette, who has lived in Oman for over 22 years and has created many series  of paintings with Omani themes says these are the ones that get sold the fastest as they are in high demand in the sultanate. She hopes to continue doing these, alongside various other themes, as long as she is in Oman, she says.

About her obsession with creating series, Juliette asserts, “I tend to paint series, rather than stand alone pieces, because once I have an idea or a project in my mind, I research it fully, and I become so invested in it that I can’t get rid of it in just one painting. I paint on the same subject or theme until I feel that I’m ’empty’, that I have given all I wanted to give about it. It might take weeks or even months when I paint on a particular subject. Then I’m done and I do a piece to ‘clean my head’ – something more technical or just a still life. Sometimes, months or years after finishing a series, I go back for a last one.”