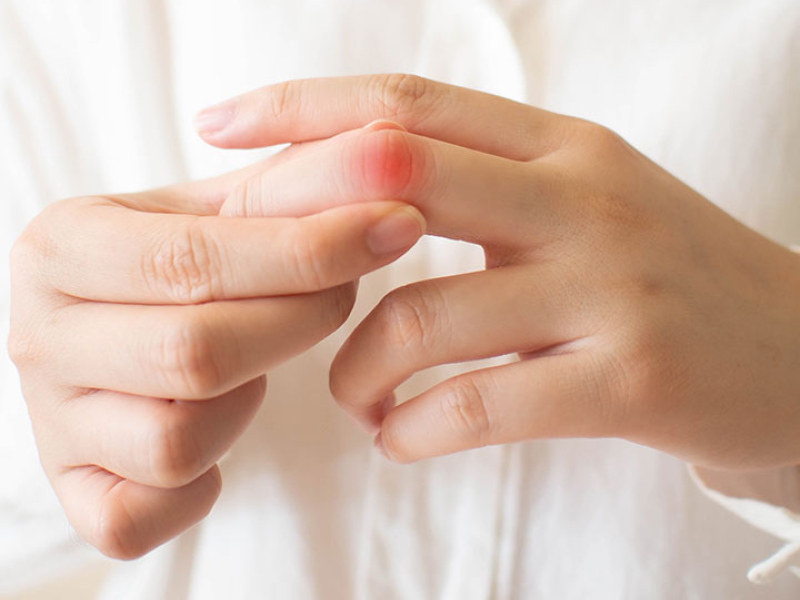 Locking and popping is a trendy hip-hop dance style, but when it involuntarily creaps into your finger joints, ‘Trigger finger’ is what you have. “This is a painful condition affecting the tendon and pulley system of the hand, resulting often in clicks on using the finger. A few patients may require steroid injections or surgical release,” says Dr Biswajit Dutta Baruah, consultant orthopaedic surgeon, KIMS Oman hospital.

Krishna Kumar was the first person in my clinic the other day. It was clear from his face that he was in a lot of discomfort. His ring finger was stuck in a bent position, and it could not be straightened, no matter how hard he tried. He looked at me pleadingly.

From a quick examination of his finger, I suspected that he had a ‘trigger finger’. I tried to straighten it but he yelled in pain. Finally, I had to numb his finger with a local anesthetic, before I applied a little force and yanked his finger straight. Krishna Kumar heaved a sigh of relief. He thanked me profusely for putting him out of his misery. He told me later, “I never imagined my finger would get stuck in this way.” It was obvious from his voice that he was referring more to fear than pain. “Why did it happen?” he asked.

This was an uncommon presentation of trigger finger. For most patients it starts with painless clicking on bending or straightening the fingers. This often progresses to painful locking or popping of the affected finger. Others may feel a progressive loss in ability to bend or straighten the finger without any clicking or popping. Often the locking of the finger in a bent position is common in the morning when the patient wakes up, and as the day progresses, the finger usually loosens up. But why does this happen?

The condition was first described by Notta in 1850. This condition is a pathology of the tendon and not the bone or joint as most patients happen to assume. Tendon is a rope-like structure that connects the muscles in the forearm to the bones of the fingers of the hand. The malady occurs due to a mis-match in the diameter of the tendon and its covering (tendon sheath). Inflammation of the tendon sheath results in its thickening and narrowing thus preventing the smooth excursion of the tendon. Often the thickening results in a pea sized swelling (nodule). The tendons in the palm and fingers are restrained by a system of pulleys. The very first pulley (A1 pulley) is located at the level of the horizontal palmar crease. It is at this point that the nodule often develops and gets stuck in the pulley resulting in clicking and popping.

The exact reason why this happens to the tendon and pulley system of the hand is not known. Studies have shown that this is common in the 50’s and 60’s and occurs about 6 times more commonly in women than in men. It is also more common in diabetic patients. The association is strongly associated with the duration of diabetes rather than the degree of blood sugar level (glycemic control).

The ring finger is most commonly affected followed by the thumb. In many patients, multiple fingers may be involved in various stages of clicking.

Most often the doctor is able to come to a conclusion by eliciting history and examination of the involved fingers. X-rays are totally unnecessary. However certain painful conditions of the fingers like dislocation following a fall, or entrapment of the tendon on the small bones of the hand, tumour of the flexor tendon sheath or arthritis of the small joints of the hand as in rheumatoid arthritis may mimic the locked finger. In such situations, the surgeon may order x-rays or ultrasound and rarely an MRI to ensure that it is a case of trigger finger and not any other condition.

Once the diagnosis is ascertained the surgeon will start anti-inflammatories. Splinting the finger in a few degrees of flexion can be helpful in preventing the locked position. In most patients, this would suffice and over a period of time symptoms will subside.

A few patients may need steroid injections into and around the tendon sheath. Most of these patients do well with 2-3 injections in a space of a few weeks. It works well in non-diabetic patients with a single finger involvement. It is less effective in those with long standing (more than 6 months) affliction.

In diabetics, one must take care as it can lead to infections, so getting a good control over blood sugar level is important before proceeding with a steroid injection. Possible side effects of repeat injections may lead to, in addition to infection, lightening of the skin, thinning of the fat pad underneath the skin, temporary (transient) rise in blood sugar levels and the devastating effect of tendon rupture. Hence, surgeons will be on guard and advice against repeat injections.

If all these non-operative treatment methods fail, the surgeon will resort to surgical release of the pulley. Under local anesthesia, the pulley is released ensuring free excursion of the tendon. Small dressing is applied over the wound. Sutures, if any, are removed in 10 days and the patient is able to return to his normal day in day activities.

Some surgeons perform the release by percutaneous method through a tiny incision using a sharp needle. However complications are higher as inadvertent damage to the adjoining blood vessels or nerves is common as the pulley or the tendon are not visualised at the time of the procedure. It is much safer to do the procedure by the open method.

Once I had explained the condition to Krishna, and he understood the condition, I could see that the fear in his eyes had abated. I proceeded to numb his finger with local anesthetic. Thereafter with a little force I was able to straighten the finger. The immediate result of freeing the finger from its locked position was so relieving to him that his face glowed in satisfaction. He was immensely grateful. I proceeded to explain regarding the medications and splinting. Within 2 months he was on his way to recovery with no further incidence of locking.

In summary, trigger finger is a painful condition affecting the tendon and pulley system of the hand resulting often in clicks on using the finger. They respond well to anti-inflammatory medications. A few persons may require steroid injections. A small percentage of these patients do well with surgical release. Overall the prognosis is excellent and complications are very rare.