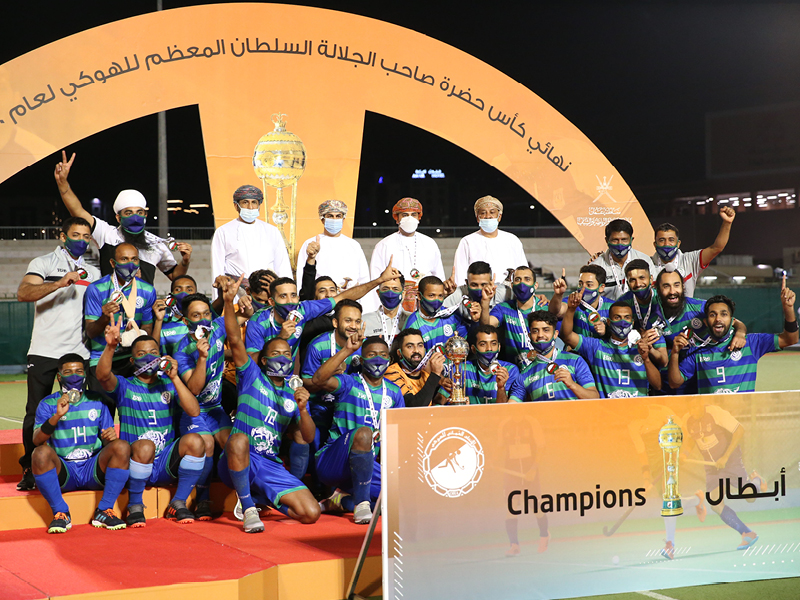 Hockey powerhouse Ahli-Sidab stamped their superiority in style as they clinched the 50th edition of the coveted His Majesty’s Cup Hockey Championship for a record 12th time at the Sultan Qaboos Sports Complex (SQSC) on Monday.

Last season’s runner-up, Ahli-Sidab proved too good for their rivals Bausher, as they cruised to a 3-0 win to become the sole record-holder of the maximum number of titles.

Earlier in the third-place playoff, Seeb, who have won the prestigious trophy 11 times, had the consolation of a podium finish as they trounced Sohar 4-1.

Ahli-Sidab, under the guidance of former India women’s and junior team coach C R Kumar, went into the summit clash as the fancied and favourite and expectedly dominated the match against Bausher, who were in the final for only the second time.

Coached by Saleh al Farsi, Bausher displayed early hints of a fight and did not give their experienced rivals much of an opening in the early stages of the match and held on for a goalless stalemate at the end of first quarter. However, Ahli-Sidab, who were more aggressive and displayed more attacking intent won a series of penalty corners and soon got the breakthrough in the second quarter from a short corner.

Ahli-Sidab’s Indian recruit Affan Yousuf was in the thick of action and his whipping shot off a penalty corner got the opening goal in the 21st minute.

The goal spurred the blue and green jersey players as they continued to launch forays into the Bausher citadel and went ahead when Aseel al Maini, who had a brace to his credit in the semifinal win against Seeb on Sunday, found the target with a strong flick from the right flank three minutes after the opener.

The winners led 2-0 at the interval and Bausher came back strongly in the third quarter raising hopes of a fightback.

They did earn a couple of penalty corners but failed to pierce the Bausher wall as a goal eluded the yellow shirts.

On the other flank, Bausher’s goalkeeper Amjad al Hassani was a busy man and did stave off Ahli-Sidab’s attacks with few good saves but the failure of finding a goal upfront put paid any hopes for Farsi’s men.

Ahli-Sidab rounded off their title win with one last flourish as Ahmed Sabeel al Balushi found the back of Bausher’s net.

For Ahli-Sidab’s coach Kumar, victory was ‘something special’. In his post-match remarks, Kumar, who is in his first stint with the club, said, “To win the 50th edition is something special and lift the trophy after two years is a wonderful experience.

“We had quite a few injury issues with our players and despite that to win, I am really happy. We were on top of the game from the start of the match and it was a great performance by my players.”

He added, “Having been with the players for a short time, I was more of a stranger to the team but the players and the management made me feel at home.

“I have to express my deep gratitude and thanks to our club chairman Dr Marwan al Juma, who was a constant source of encouragement, attending training sessions and boosting the morale of players.”

Kumar, who was part of the Indian junior World Cup winning side, said, “The win should now help the club aspire for better standards. The support staff and my coaching staff were amazing and I thank them all for making this historic edition
special.”

Kumar’s counterpart, Farsi was ‘proud’ of his boys’ despite the loss in the final.

“We tried our best though we did not have a lot of time to prepare. But to reach the final and do what my boys have done, I am proud. The difference was the experience Ahli-Sidab have playing in competitions and in finals. They were the better side and deserve to win.”

Earlier in the third-place playoff on Monday, there was some consolation for 11-time winners Seeb as they claimed a bronze medal with a 4-1 win over Sohar.

Seeb, who saw their joint record of title wins broken later on Monday when Ahli-Sidab won for the 12th time, proved too strong for Sohar, coached by
former Seeb player Hamood al Wahaibi.

Ahmed al Balushi scored the opening goal for Seeb two minutes into the second quarter and three minutes later, Ous al Zadjali made it 2-0. Seeb led 3-0 at the break with the third goal hammered by their Pakistani striker Muhammad Ateeq.

Sohar’s Younus al Anqoodi reduced the margin with a goal in the 42nd minute before another Pakistani player of Seeb, Mubashar Ali completed the rout with a goal with a minute left for the hooter.

Later, H E Dr Abdullah al Harassi, Minister of Information, who was the chief guest, gave away the trophy to Ahli-Sidab club manager Hussain Said and medals to the top-three teams and officials.