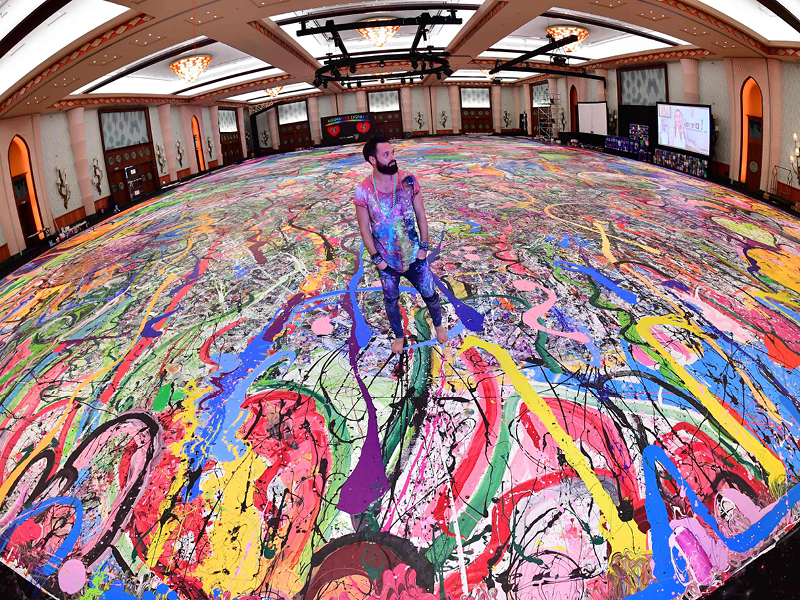 British artist Sacha Jafri on Thursday unveiled 70 framed sections of his work ‘Journey of Humanity’, the world’s largest painting on canvas, which will be auctioned off to raise millions for charity.

The 44-year-old contemporary artist hopes his Guinness World Record-holding painting, which spanned 1,595.7 sqm of the ballroom at Dubai’s Atlantis, The Palm hotel, will spark a humanitarian movement. The colourful painting now adorns the walls of the luxury hotel’s ballroom in 70 separate framed pieces of varying sizes that will be sold at auctions in the coming years.

The aim is to raise at least $30mn to fund health, sanitation and education initiatives for children in impoverished parts of the world. But Jafri, who is currently based in Dubai in the United Arab Emirates, said he has an even bigger goal.

“I don’t want this to be a one-off thing. I want to actually help change the world, and the way to do that is we’re going to put the internet in all the poorest communities of the world,” the artist told AFP. “Then we can bring education in, and give (children) a real education. And where are they going to put that? Back into their community.

“All you need is five success stories from those communities and you can change the world. That’s what we’re going to try to do. It’s going to take 10 years, but we can do it.”

For Jafri, the devastating impact of the coronavirus pandemic across the globe has resonated with him, highlighting a break between humanity and the planet and driving him to focus his efforts on connecting people to counter its impact on children.

“When humanity becomes disconnected from the soul of the Earth, it’s a far bigger problem than COVID-19 will ever be,” he said. “We were allowing the destruction of the planet, that’s well known, but what isn’t well known is that we were allowing the destruction of humanity. That’s unforgivable,” added Jafri, sporting a paint-splattered blazer over jeans, a white T-shirt and cowboy boots.

Children from 140 countries submitted artwork online to be included in Jafri’s creation, which was completed at the end of September, shortly before it was confirmed by Guinness World Records as the “Largest Art Canvas”.

“It depicts the soul of the Earth, nature, humanity itself, the love and nurture of the mother, the guidance and protection of the father, as they guide their child through life and enable them to feel safe, loved and brave, so they can grow their wings, make their dreams come true, and take them into the solar system,” Jafri asserts.

Tools needed – Over 1,000 brushes were his key tools

Task – Laying 300 layers of colour on the massive canvas