All set for hockey ‘Clasico’ 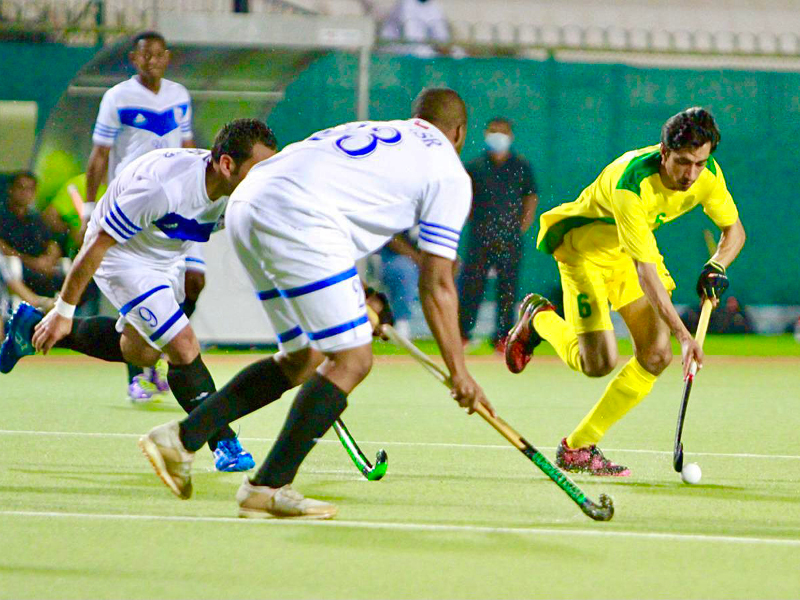 Seeb meet Ahli-Sidab in first semifinal at SQSC on Sunday; Bausher face Sohar in other semifinal

For the past couple of decades and more, a derby match between hockey heavyweights, Ahli-Sidab and Seeb, is what the hockey lovers of Oman would eagerly look forward to. And the reasons were crystal-clear. The two teams have offered some of the most thrilling and hard-fought games and it is no wonder that the two giants have dominated the domestic hockey scene for long.

A peek into their club’s roll of honours board shows both the teams having a record 11 His Majesty’s Cup titles to their names. Sidab won it five times, Al Ahli claimed once and after their merger to form Ahli-Sidab, the club claimed another five to match Seeb’s 11.

Following the conclusion of the second round of the 50th edition of the His Majesty’s Cup Hockey on Friday, Seeb and Ahli-Sidab are now set to face in the semifinals of the coveted tournament with Oman’s hockey ‘Clasico’ set to begin at the Sultan Qaboos Sports Complex (SQSC) at 6pm on Sunday.

In the other semifinal of the evening, which will begin at 8pm, two teams eyeing their maiden crown – Bausher and Sohar – face off each other.

However, it is the match between arch-rivals Seeb and Ahli-Sidab that the hockey fans are waiting for. The last time when the two met in a knockout match was in the 2018 HM’s Cup final when Ahli-Sidab beat Seeb 3-0 to equal the latter’s record of 11 titles.

Prior to that, the two teams met in the semifinals of 2016 HM’s Cup which Seeb prevailed and then went on to win the crown, their last of the 11 crowns. Yet another knockout match the two were involved was the 2015 final which Ahli-Sidab won 2-1.

Since 2015, either Seeb or Ahli-Sidab have featured in the final of this prestigious competition and the streak will continue with one of them meeting the winner of Bausher vs Sohar game in the title clash on March 1.

On Friday, Seeb held defending champion Al Nasr 2-2 to knock the holders out of the competition. The reigning champions made their exit as they lost out on goal-difference to Seeb with both collecting four points each. Bausher topped Group B with six points despite going down 2-3 to Dhofar in an earlier game on Friday.

Speaking ahead of the semifinals, Seeb coach Khalid al Raisi said, “It is going to be a very tough match. The ‘Clasico’ between these two clubs have always produced thrilling action with both the teams’ players passionate and keen to win. I am hopeful of a good game and Inshallah, a positive result for us.

“I have confidence in my boys and the presence of three top-class players from India and Pakistan have been very good so far for us.”

Raisi said that he would be happy if the prestigious cup is won by one the Muscat-based club as three of them in fray are from capital region.

Pakistan World Cupper and world-class dragflicker Mubashar Ali has provided the much-needed impetus to Seeb and with his countrymate, Muhammad Ateeq, and Indian Junior World Cupper, Abharan Sudev, teaming up well, unbeaten Ahli-Sidab are expected to face their first major test in the tournament.

Ahli-Sidab’s coach C R Kumar, a former Indian women’s and junior team coach, who is on his first stint with the club, sounded confident ahead of the semifinals.

In his remarks to Muscat Daily, on Saturday he said, “The team has been playing very good hockey and is unbeaten in both the rounds. The confidence of my players is high but I am aware that Seeb is a tough team. We are well-prepared and hope to overcome the challenge.”

Ahli-Sidab have been relying on their three Indian imports a lot with Affan Yousuf, Jasjit Singh Kular and Sayyad Niyaz Rahim in their ranks. Ahli Sidab concluded their group engagements with a 4-1 win over Majees on Thursday to top the group with nine points following their earlier wins against Nizwa (4-0) and Sohar (3-0).

Kumar said that the presence of foreign players in different clubs have raised the intensity of the matches in the second round and this will do a ‘world of good’ to the young Omani players ahead.

“The Omani players have a good built and few of them have impressed me. However, what I feel is that they lack exposure and they need to play more competitions and face more international teams to develop their potential further,” said Kumar.

In the other semifinal match, Bausher, who were finalist in 2016,  have been the team to watch out in this edition under coach Saleh al Farsi.

“It is difficult to maintain the high-level of tempo day after day and despite playing a decent match, we lost to Dhofar 2-3. In a way, it is a good wake-up call for my players ahead of our semifinal against Sohar,” said Farsi.

The former UAE national team coach, who has previously had two stints with Sohar , said, “We will give our best and the boys know that they are a step away from the summit. Sohar is a strong and attacking team and we have to be at our best to get past them.”

Though Nizwa was the weakest team in Group A comprising Ahli-Sidab, Majees and Sohar, the fact that Sohar, coached by former Oman international Hamood al Wahaibi, managed to strike 14 goals in the second round (beat Nizwa 10-0, beat Majees 4-2) underlines their attacking prowess.

Sohar have roped in Egyptian internationals to carry the burden of the club’s campaign in this tournament.

The Asian Hockey Federation (AHF) chief executive, Tayyab Ikram, has arrived in Oman to attend the semifinals and final of the 50th His Majesty’s Cup Hockey Championship. Ikram has been a great supporter of Oman hockey and has been instrumental in Oman getting to host top-level AHF competitions in the past.

Sources have said that Oman Hockey Association (OHA) are in touch with the AHF to host another major AHF tournament by the end of year.

OHA chairman Talib al Wahaibi told Muscat Daily that the AHF top boss will be the chief guest during the first semifinal on Sunday and present the ‘player of the match’ award.

Wahaibi also revealed that the second semifinal will be graced by Sheikh Said bin Saleh al Hinai, the first captain to lift aloft the HM’s Cup football trophy in 1971 as captain of Al Ahli Club.

Wahaibi said that they had made attempts to invite Dr Hamad al Riyami, who had the honour to hold the first HM’s Cup hockey trophy in 1971 but his health condition has forced him to express his regret.

For the second year in a row, the OHA has begun using the VAR (Video Assistant Referee) system in the HM’s Cup after the arrival of top-class FIH umpires, Javed Shaikh and Raghuprasad R V from India.

Both the FIH Grade I officials have officiated in top-class tournaments and their presence  will also benefit the local umpires, who have been rubbing shoulders with the duo over the past few years. The duo have been regularly  officiating in HM’s Cup.

Shaikh and Prasad have been selected by the world hockey governing body, FIH, to officiate the 2020 Tokyo Olympics. Shaikh has previously been an umpire at Rio Olympics in 2016 and 2014 World Cup and also umpired at the Commonwealth Games and Asian Games.

Prasad too have umpired Commonwealth Games, Asian Games, three World Cups but will make his debut in Olympics at Tokyo. They are the only two Indian umpires at the Tokyo Games.