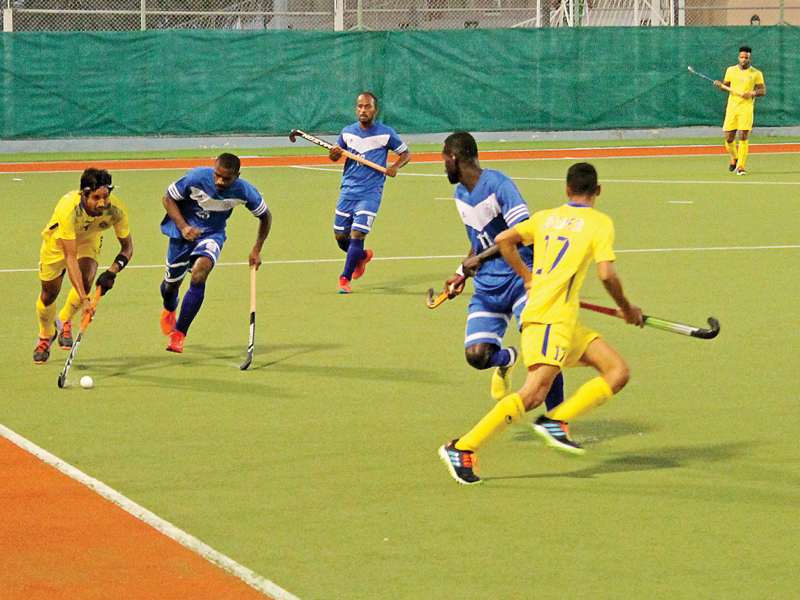 For long, clubs like Al Nasr, Ahli-Sidab and Seeb have ruled the domestic hockey competitions. The three heavyweights share a total of 30 of the 49 titles among themselves in the His Majesty’s Cup Hockey Championship.

It is no wonder that holders Al Nasr, last edition’s runner-up Ahli-Sidab,  and Seeb are among the favourites for the top honours in the ongoing 50th edition of the HM’s Cup at the Sultan Qaboos Sports Complex (SQSC).

On Wednesday, unfancied Bausher caused one of the biggest upsets as they edged past reigning champions Al Nasr 1-0 in a crucial Group B clash and Seeb defeated Dhofar 6-3 in a nine-goal thriller to throw open the group wide open.

The victory for Saleh al Farsi-coached Bausher took them closer to a semifinal spot as this was their second successive win after they began their second round campaign with a 4-2 win over Seeb on Tuesday.

With two wins, Bausher have six points and play their concluding group match against Dhofar on Friday.

A draw will be enough for Bausher to confirm their spot in the semifinals. Against Al Nasr, the all-important goal came off a counter-attack with Indian import and young striker Sukhjeet Singh ‘Kaka’ striking home in the 51st minute of an exciting match.

Both the teams had goal-scoring opportunities but it was Bausher who took the honours as Al Nasr was left to rue couple of gilt-edged chances. Bausher goalkeeper Amjad al Hassani came up with a couple of good saves.

Speaking to Muscat Daily after the match Bausher coach Farsi said, “It is not just the players on the pitch but all the 20 players that have shown a remarkable spirit and a positive intent that saw us win against the champions. Ahead of the match, I told my players that this would be a close game and one goal will make the difference.

“It was nice to see ‘Kaka’ score off that counter-move. My players kept fighting and we did have more chances and penalty corners. In the end, the three points are important and I am very happy with the result as it was our second tough consecutive match.”

The former UAE national team coach thanked the team management for the trust in him.

“I have told my players to keep fighting and we have a good group of experienced players from India and young national team players. We will take each game as it comes and will prepare hard for Friday’s match against Dhofar,” he added.

It was the third goal for Sukhjeet in the second round after his brace in the match against Seeb on Tuesday. Along with Sukhjeet, Bausher also have former Indian Olympian Pradeep Mor and former Indian international Gaganpreet Singh.

In the second match of the same group later in the evening, 11-time champions Seeb got their first win in the second round against Dhofar in a thriller.

It was the second successive defeat for Dhofar after they went down to Al Nasr in the opening match on Monday.

Seeb were 2-0 up by half-time with goals from Indian junior World Cupper Abharan Sudev (12th minute) and Hassan al Balushi (17th min). Dhofar fought back soon after the start of third quarter with a goal from Aiman Faraj Khadim (31st min).

Seeb’s Ous al Zadjali restored the two-goal cushion with a goal in the 38th minute but Dhofar fought back to make it 2-3 just before the end of third quarter with a penalty corner converted by Mohammad Faraj, an Indian junior international.

The final quarter saw intense  goal-mouth action as four more goals were scored. Seeb’s dragflicker and Pakistan’s World Cupper Mubashar Ali converted two penalty corners (53rd and 56th minutes), while Faraj got a goal for Dhofar, also through a penalty corner, in the 54th minute before  another Pakistan-recruit  of Seeb, Muhammad Ateeq rounded off their victory with a goal in the 57th minute.

The win for Seeb meant that their concluding group game against Al Nasr on Friday will be a knockout game for both the teams.

On Thursday, the top-two teams from Group A will be decided with 11-time winners Ahli-Sidab in pole position with six points after two successive wins. Sohar and Majees have three points after one win each while Nizwa have lost both their games.

The semifinals of the tournament will be played on Sunday with the final on March 1.