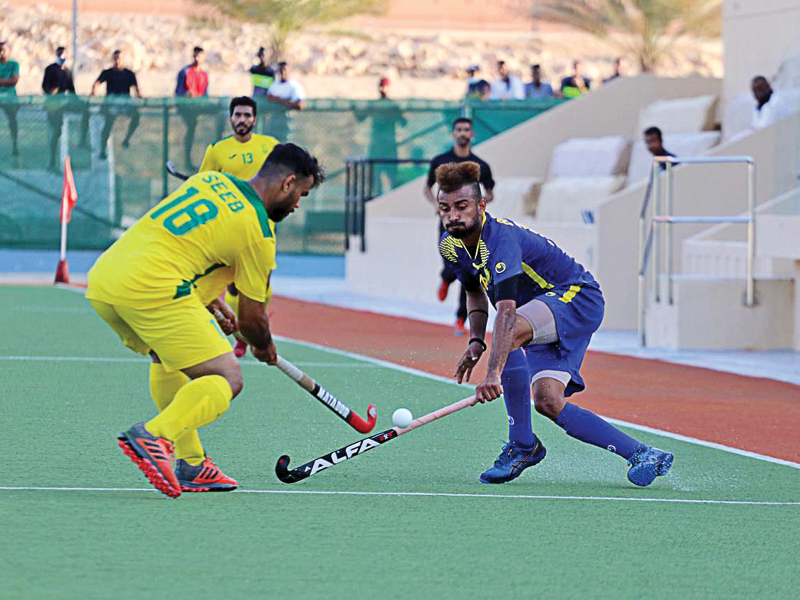 Bausher coach Saleh al Farsi’s belief in his international players from India paid off in their Group B opening match of the second round of the 50th His Majesty’s Cup Hockey Championship 2020 as they stunned former champions Seeb 4-2 at the Sultan Qaboos Sports Complex (SQSC) on Tuesday.

In the second match of the day, previous edition’s runner-up Ahli-Sidab registered their second successive win as they outplayed Sohar 3-0 in a Group A match to put one foot in the semifinals and in the last match of the evening, Majees drubbed Nizwa 8-1 for their first win in the same group.

The first match of the evening witnessed a remarkable turnaround from Bausher, who were stunned by the experienced Seeb with a goal in the very first minute of the match.

And five minutes later, Seeb seemed to have taken control of the match with their second goal as they were awarded a penalty stroke. Pakistan World Cupper Mubashar Ali, who is considered one of the best dragflickers, converted the stroke to end the first quarter with a 2-0 lead.

However, Bausher, which have a mix of young and experienced players fought back hard to score a memorable win.

The experience of three Indian players – Pradeep Mor, the only Olympian in the current tournament, and former Indian defender Gaganpreet Singh and Sukhjeet Singh ‘Kaka’, came in handy as the trio played a big role in the victory.

Gaganpreet, who has been specifically roped in for his dragflicking prowess, didn’t disappoint with his ability as he sounded the boards off a penalty corner in the 20th minute to begin the team’s remarkable fightback.

The goal spurred the Bausher players and they were level in the next minute as Sukhjeet found the target. Two goals in two minutes shocked the 11-time champions and Seeb could never recover from the blitz.

After the interval, Gaganpreet was again to the fore as he blasted in a powerful dragflick to put his team head in the 34th minute and Sukhjeet matched his countrymate’s scoring skills with a field goal four minutes later to make it 4-2. Bausher defence then withstood the onslaught of Seeb attacks to emerge as worthy winners.

In the opening round of the tournament, Bausher had won both their games against Seeb. However, Seeb, coached by Khalid al Raisi, were without their foreign players who arrived recently. Besides Mubashar, Seeb also have Indian junior World Cup player Abharan Sudev and Pakistani international Muhammad Ateeq in their ranks.

Speaking after the win on Tuesday, Farsi, a former UAE national team coach, said, “We took the confidence from our wins in the first round. We knew that Seeb have been bolstered by the coming in of top-class players from India and Pakistan but we too have experienced trio from India. I have faith in the potential of them. Gaganpreet proved his dragflicking skills and Sukhjeet showcased his talent as a young striker.

“Pradeep [Mor] had a fantastic game and his experience has helped my young Omani players a lot. He is truly a leader and it is good to see my team gel well with the Indian trio.”

Farsi, who has coached Sohar and Quriyat clubs in the past, added, “The win is a morale-boost ahead of our match against defending champions Al Nasr tomorrow. We are ready to give them a good fight and I know my boys are capable of causing an upset. We will take each game as it comes.”

Later on Tuesday evening, Ahli-Sidab’s Salah al Saidi stole the limelight from the foreign players as he struck a brace in his team’s 3-0 win over Sohar.

It was the second successive victory for India’s C R Kumar-coached team and with only a game against Majees remaining, the 11-time winners are certain of their berth in the last-four stage. Saidi hammered in two goals in a span of a minute to put Ahli-Sidab in command soon after the start of the second quarter.

Former Indian international, Affan Yousuf, who had a brace in the opening match against Nizwa on Monday, completed the rout with a penalty corner conversion seconds before the final hooter.

In the final match of the evening, Majees toyed with Nizwa, recording a 8-1 victory. Following completion of two rounds of Group A, Ahli-Sidab lead the table with six points while Sohar and Majees have three points each. Ahli-Sidab’s match against Majees on Thursday could decide the winner of Group A.