We look out to Oman for solutions: Danish envoy 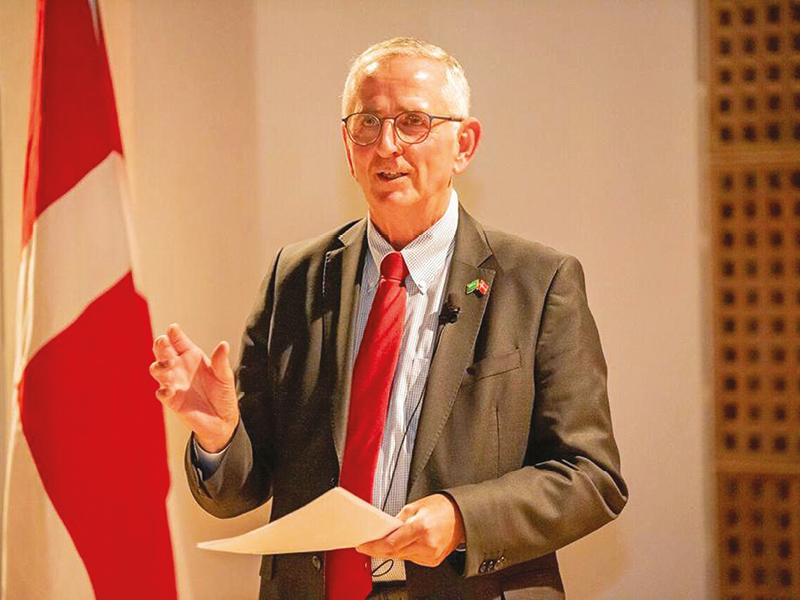 “Nothing goes wrong in Oman. Everything seems so pleasant,” said Ole Emil Moesby, Riyadh-based Danish Ambassador to Oman, on visiting the Muscat Daily office during his short trip to the sultanate last week.

Serving as ambassador to five countries in the Middle East – Bahrain, Kuwait, Saudi Arabia and Yemen, besides the sultanate – Moesby said this sense of calm and comfort comes from the fact that Oman enjoys friendly relations with every country and “hence has the ability to accommodate every country in dialogues” to iron out differences.

“That gives you (Oman) the role to try to accommodate (different groups) in dialogue,” Moesby said on his visit to Muscat to present his credentials to His Majesty Sultan Haitham bin Tarik last week.

The envoy noted that the political changes in the region and elsewhere give “us an opportunity to think differently”.

“Following the changes we have seen in recent days,” Moesby said, “moving through these is like navigating a ship through uncharted waters.”

“This demands ingenuity and networking that can make the ship move in the right direction. Oman has this maritime ability to give the ship a direction,” Moesby said in the context of Iran and the possible revival of the Joint Comprehensive Plan of Action (JCPoA) from which the US administration under President Donald Trump had moved out.

The Iran-US stalemate may yet linger with President Joe Biden demanding that the Islamic republic scale back its nuclear programme in line with JCPoA restrictions before American sanctions are lifted.

“If Iran is ever going to come out of the JCPoA, it will have to deal with issues differently,” Moesby said, adding, “And this is the area where Oman has a tremendous role to play in building up that confidence and also moving on with those new ways of looking at things.

“Oman understands the thinking of various parties and the way to move forward. You have the ability to talk to everyone. All are waiting for Oman to do something on this.

“Recently, we saw a change under which Qatar, Saudi Arabia, Egypt, (United Arab) Emirates and Bahrain began a new chapter of dialogue. We have also seen developments following which some of the Arab countries are now setting up formal relationships with Israel.”

The COVID-19 pandemic has dealt a severe blow to the entire world, Moesby noted. “The situation was never constant. And it was not possible to understand what could be the course or the remedies.

“In Denmark, we were really frightened and felt devastated seeing what was happing around the world. We immediately imposed very stringent restrictions, which can only be done with a strong political will,” he said, adding that many other countries dealt with the situation differently.

Handling the healthcare sector and the economic impact of the pandemic posed a challenge but “we have a strong force of medical professionals competent enough to deal with the emerging situation”.

Danish medical professionals knew how to deal with elderly patients and those in ICUs, while using the limited resources optimally, he said.

Taking note of the severe impact of the pandemic on economies around the world, he said, “Many of us were anxious when COVID-19 hit. Besides the pandemic, you (the region) had to also deal with the assault of reduction in oil prices.”

“There’s no crisis ever without having good effects… because it changes people’s way of thinking; it changes our behaviour and the way we communicate,” he said.

“With the culture and rules that we have developed during the pandemic… virtual meetings and other events, the world is going digital like never before.

“On Sunday, I met the Minister of Commerce, Industry and Investment Promotion Qais bin Mohammed al Yousef and we discussed how we can develop trade partnerships between the two countries. I suggested we have webinars for this.”

“Had I asked Danish companies to come to Oman and explore partnership opportunities, there would have been few participants. But now with the changes following the pandemic, I am sure we’ll have more participants in webinars from both the sides. This may open up new areas of partnership and collaborations,” he added.

“In the last 40 years, we have added 1mn to our population, but trebled industrial production using half of the energy we needed in 1980.

“We are extremely strong in efficiently using energy and our way of going about it is by shifting completely to renewable energy from any source,” he said, asserting that this is an area where Oman and Denmark can join hands.

Denmark meets 60 per cent of its energy demands from renewable sources such as wind.

“We aim to meet 100 per cent of our energy needs from renewable sources by 2030,” the envoy informed.

According to Moesby, areas of cooperation could include the health sector, food and agriculture, and water conservation.

Describing Omani architecture as ‘famous’, he said it too presents scope for cooperation between the two countries.