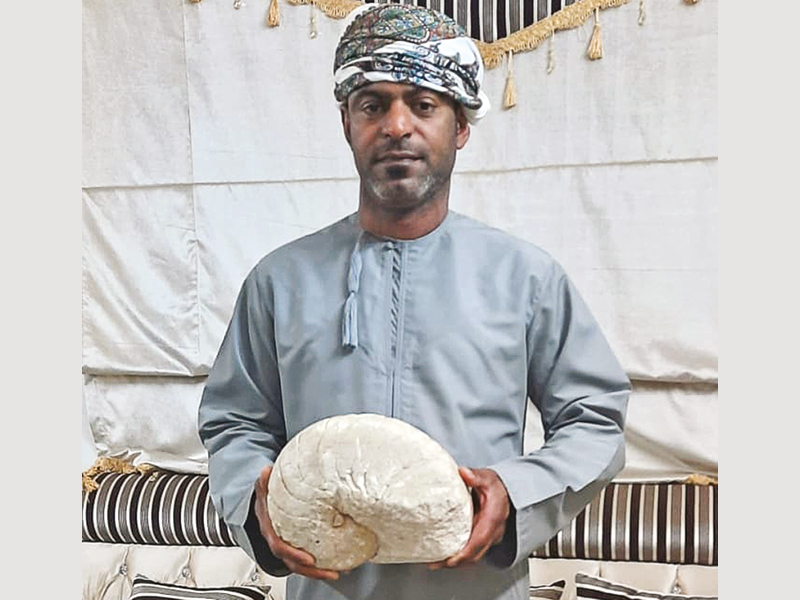 An Omani fossil collector has found a variety of remnants of mysterious creatures from a bygone era dating back millions of years in the wilayat of Ibri.

Talal Matar Salem al Jahwari from the wilayat of Suwaiq found a treasure trove of fossils in Ibri and handed them over to the Natural History Museum of the Ministry of Heritage and Tourism.

Jahwari’s love for collecting and studying fossils began early in life and was aided by his profession which involves working in remote areas.

Speaking to Muscat Daily, Jahwari said, “I started collecting fossils in 1997 and my work in the oil and gas sector greatly helped me find many.”

“In 2020, I found these fossils at the site of a company that is building dams in the wilayat of Ibri in Wadi al Salif. These are great samples for exhibition in museums and for future reference.” Jahwari explained that the nautilus is a pelagic marine mollusc of the cephalopod family Nautilidae. Among the fossils he found are ammonoids, a group of extinct marine molluscs in the subclass Ammonoidea of the class cephalopoda. “These molluscs, commonly referred to as ammonites, are more closely related to living coleoids, such as octopus, squid and cuttlefish.”

Jahwari explained that the earliest ammonoids appeared during the Devonian period, and the last species vanished in the Cretaceous–Paleogene extinction event. The name ‘ammonite’, from which the scientific term is derived, was inspired by the spiral shape of their fossilised shells resembling tightly coiled rams’ horns.

“The fossilised tree trunks found are of a pine species that is millions of years old as well,” Jahwari said.

“I handed over the fossils to the Natural History Museum in order to document and preserve these and to display these. The museum is one of the most important historical museums in the sultanate, and through its exhibits it tells the story of many extinct creatures, and the natural diversity and geological heritage of Oman. The museum attracts a large number of visitors – citizens, residents and foreign tourists.”

Jahwari has collected numerous shells, oysters and other ancient geological pieces in the past. “I want to establish a travelling exhibition to exhibit some of these pieces. I am eager to spread awareness of our geological heritage among community members and want to preserve these natural wonders. I urge all who find such fossils to hand them over to the Ministry of Heritage and Tourism.”