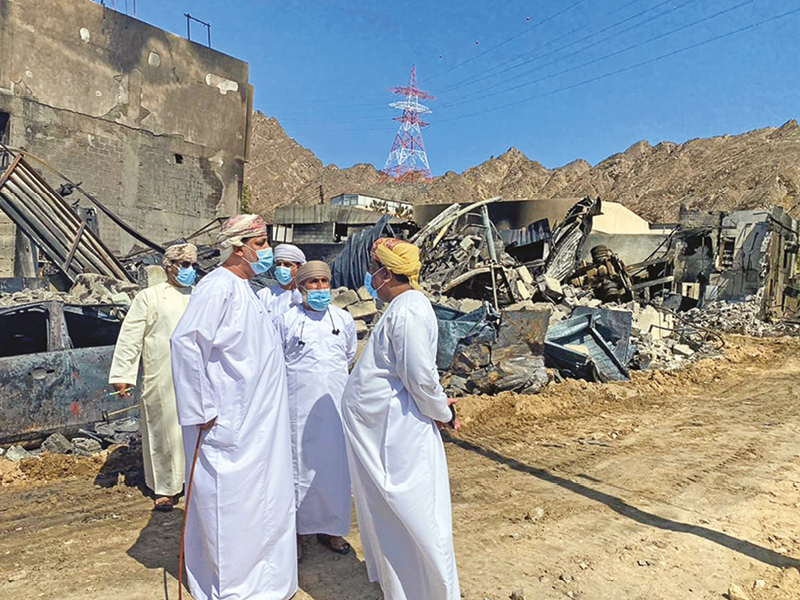 A high-level delegation on Sunday visited the Wadi Kabir Industrial Area where a huge fire gutted a large number of cars and garages on Thursday. It was decided to prepare a comprehensive report on the cause of fire and the damages caused.

They witnessed the damage caused by the fire and discussed  development of the area.

‘It was agreed to prepare a comprehensive report to know the causes of the fire and the challenges it posed to business owners and owners of industrial facilities. A study will be done to address the regulations that must be followed in the future in industrial zones, which could contribute to protecting the facilities from risks and disasters,’ OCCI stated.

The delegation also agreed on the importance of finding appropriate solutions to protect the industrial areas in cooperation with the competent authorities.

As a result of three fires recorded in Muscat in the last few days, the Public Authority for Civil Defence and Ambulances (PACDA) has cautioned the general public.

Following Thursday’s fire in Wadi Kabir, on Friday, two other fire incidents were reported in Muscat.

An advertising billboard mounted on a pedestrian bridge at Al Khuwayr caught fire. The other incident was of a fire in a restaurant in Al Khoudh in the wilayat of Seeb. No injuries were reported in the two incidents.

An official at PACDA stated that if preventive measures are not taken on time, such fires can cause extensive damage to property.

Listing measures to prevent fires, he said, “We urge people not to touch electrical appliances with wet hands and avail the services of qualified staff to repair them. One should always use quality electrical equipment.”

The official said that electrical appliances should be switched off immediately after use and serviced regularly. Smoke detectors in buildings too are recommended. People must adhere to the periodic maintenance of fire alarm systems, he said.