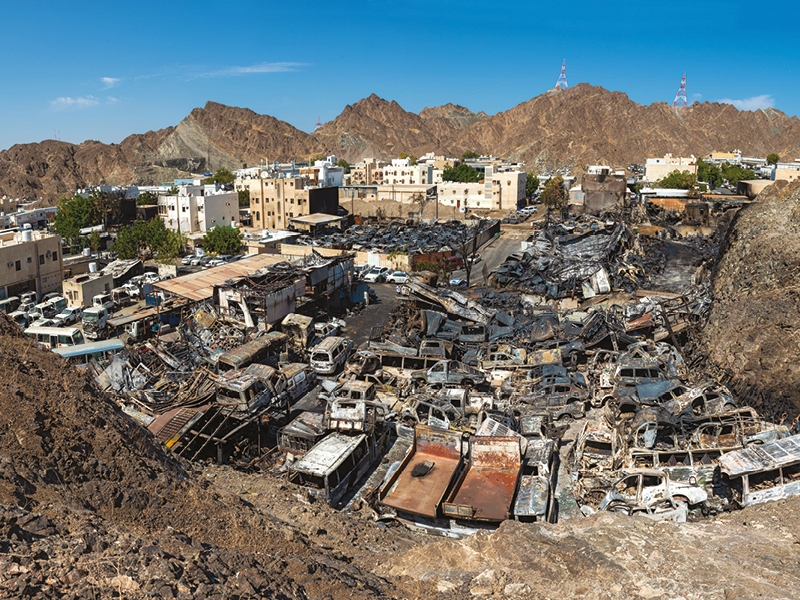 A plume of thick black smoke over the Ruwi skyline rising from what appeared like the mountains behind Sheraton Oman Hotel from a distance on Thursday afternoon caused much alarm. By evening, the cloud of smoke was visible as far as Ghubra.

The fire initially broke out in a garage next to an oil warehouse in the Wadi Kabir Industrial Area. The heat from the fire in the garage ignited the warehouse, spilling oil onto the narrow congested streets of the area. With burning oil flowing into adjacent shops and garages, the fire soon blazed uncontrollably leaving in its wake huge losses.

The Public Authority for Civil Defence and Ambulances (PACDA) worked late into the night to control the fire. No injuries were reported in the fire.

Revealing the sequence of events leading to the fire, a garage owner speaking on the condition of anonymity, said an automobile repair shop was mending its shed when sparks from a welding machine started a fire. “There was an automotive oils warehouse next to the repair shop. As the temperature rose, the oil barrels stored in the adjacent warehouse burst into flames and the burning oil flowed into the street spreading the fire.”

According to the garage owner who spoke with Muscat Daily, the  oil in the street was a foot-deep and burning furiously in front of his shop that did specialised auto repairs. He had five cars in the works, all of which were gutted in the fire along with his entire inventory of used engines and  spare parts.

“We face the loss of not just our stocks and material but also our customers’ cars. I am not sure how we’ll sort out this problem. We are waiting for the authorities to decide who will bear the loss of the customers’ vehicles which were in our garage for repairs,” he said.

He is also waiting for the authorities to inspect and decide if he can repair his garage or if the entire building must be demolished. “If repairs suffice, it will take around six months to restart our garage. The real fear is if they decide to demolish the building. We’ll be out of business for a year or two and God knows how we will bear the losses.”

Another spare parts shop  100m away from the oil warehouse was burnt to the ground.

Speaking on the condition of anonymity, its owner said, “The flowing oil burnt the cars parked on both sides of the road and wind blew the flames across the footpath igniting the garages on either side.”

He managed to retrieve some important documents from his shop in the nick of time and run to save his life. His stock of  spare parts, which he estimates was worth RO300,000, was lost in the fire.

A resident of a two-storey building in the area, with a carpentry workshop on the ground floor, said, “I saw a foot-deep pool of burning oil on the right side of our building’s main entrance. The window A/C of our bedroom on the first floor caught fire. Our beds and clothes were all burnt. Firefighters came just in time and told us to leave the building. Fortunately, no one was injured.”