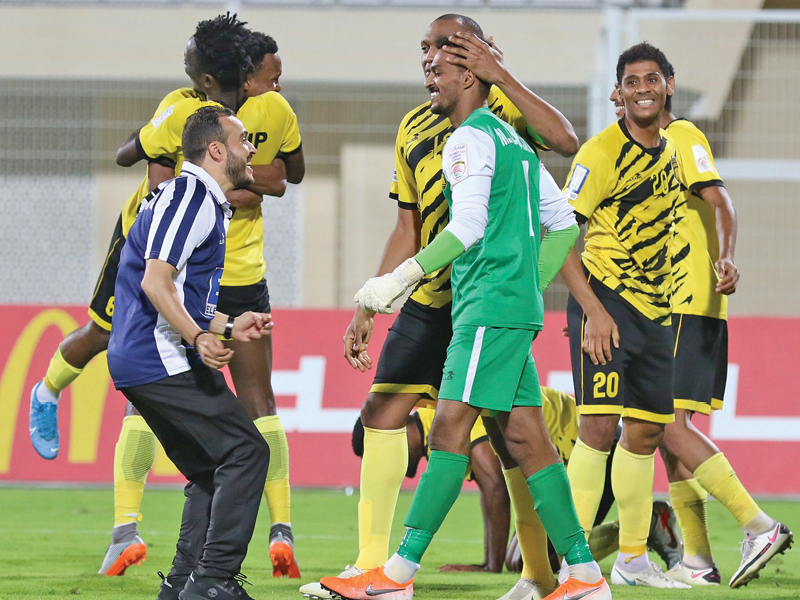 Former Oman goalkeeper Mazin al Kasbi was Al Suwaiq’s hero as the three-time champions survived a scare from Ibri to book a spot in the semifinals of the 2020-21 His Majesty’s Cup Football Championship on Tuesday.

Trailing 0-1 ahead of hosting the return-leg quarterfinal against OFA First Division club Ibri at the Al Rustaq Sports Complex, Suwaiq were on the verge of exit as they failed to find a much-needed equaliser till the 90th minute. With the match in the injury-time, Suwaiq, under their new coach Hakeem Shaker of Iraq, got a lifeline when Khalid al Alawi got the equaliser in the 92nd minute of the match to force extra-time, which failed to break the deadlock. In the shootout, both the teams went level till the fifth shot before Kasbi made a brilliant save of Ibri’s sixth penalty kick taken by Ahmed al Mujaini. Kasbi then slammed home the sixth goal to give Suwaiq a heart-stopping 6-5 win.

In the other quarterfinal game of the evening, hosts Al Ittihad sealed the final spot to complete the semifinal line-up as they beat Al Nahda 2-0 in the return-leg to advance on aggregate 3-2 score.

Ittihad had lost the first-leg to Al Nahda in Buraimi 1-2 on February 6.

At home on Tuesday, Ittihad won, thanks to goals from Abdulmajeed Shamas and Congo import Junior who converted a penalty kick.

Al Ittihad and Suwaiq join defending champions Dhofar and Omantel League winners Seeb in the semifinals, the draw of which will beheld on Wednesday.