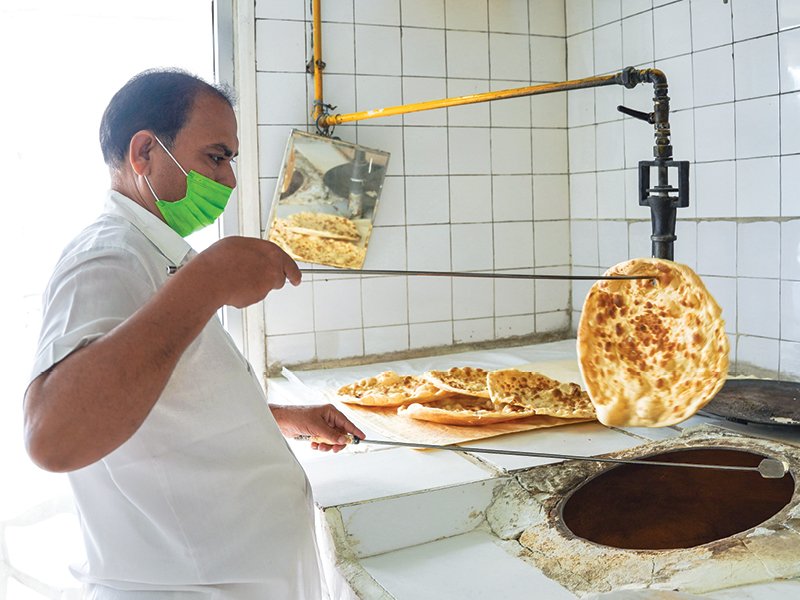 At 11.00am everyday, the world around diminishes for two manual bakers in Al Khuwayr, as they get down to an arduous, routine task of transforming a huge mass of dough into scrumptious bread. The fruit of their labour would ultimately feed hundreds of eager customers in the form of freshly baked, hot and crisp, tandoor rotis everyday.

Two brothers bake Indian flatbread for 34 years in Al KhuwayrMohammed Rafi, an Indian expatriate hailing from Azamgarh, Uttar Pradesh (in northern India), and his younger brother Siraj Ahmed have been working at this manual bakery, located in a lane opposite Jasmine Complex in Al Khuwayr (near Muscat Pharmacy) for over 34 years. All through the past three and half decades the baker duo has been involved in the same monotonous task of baking unleavened Indian bread in two sizes in a small shop equipped with just an electric kneader and a gas-fuelled furnace.

Though the task at their hands has been simple, the brothers are well known for their friendly, courteous nature towards patrons, the rock bottom prices of their bread, and, of course, the most appetising taste of hot and crisp tandoori rotis, which some call ‘naan’.

It’s not uncommon to see their patrons tuck into the rotis – some while walking away with the bead under their arms, others while in their cars itself. You don’t immediately need an accompaniment, though a hot cup of ‘Karak tea’ or a bowl of ‘Aloo-mutter’ would be great to dunk the crisp rotis into. But, since the bread itself is the ‘hero’, the side-dish hardly matters. The hot and crisp tandoori rotis, however, go well with dishes like Tadka dal, Paya Masala, Chicken Karhai, or steaming hot Haleem.

“We have been running this manual bakery in the very same place since 1986 and over the past 34 years we have seen the city change immensely. Today, there is development everywhere and shops, bakeries, supermarkets and restaurants have mushroomed in every nook and corner. While all this bodes well for the city and the people, somehow, it has sounded the death knell for us,” said Mohammed, adding that business has been on a downswing for the past few years and it only seems to be getting worse every passing day.

Siraj, however, strikes an optimistic note recalling the good old days when their bakery was in good demand. He said, “There was a time when we had no time to spare and had to work non-stop from morning to night to cater to the demands of our patrons. We would knead many sackfuls of flour everyday and produce hundreds of rotis all day as people came in to buy them morning, noon and night.”

Mohammed added that the quality and prices of their bread have remained unchanged for decades despite the fact that prices of flour, gas, electricity, rent, etc have gone up manifold. The produce of their bakery is, however, still in good demand by some long-time patrons who regularly frequent their shop for their daily bread as well as to cater to guests at home parties or to carry along bread for picnics and outings.

Prepared with just a few ingredients like flour, all-purpose flour, salt and water, the rotis are flattened by hand, mounted on a padded cloth cushion and then stuck to the internal sides of a gas-fuelled furnace that resembles the coal-based tandoors which are used till date in homes as well as eateries in northern India. Initially, the baker brothers used a coal-based tandoor in their shop but later switched to a gas-based one as it was more economical and convenient. “The taste of bread baked in a coal furnace, however, is much better,” Siraj pointed out.

As we talked with the brothers about their daily task, cars kept stopping by and honking to get their daily supplies, sold literally for a song. “I am a regular buyer,” said one of the customers, as he handed out a few hundred baisas and immediately went on to savour his favourite bread at the shop itself. “I just love to have it hot,” he winked, adding, “you cannot get this taste at the finest restaurant or even at any of the popular bakeries in town. Try it, to believe me!”

There were others who called in to place orders which they would subsequently pick up. But, the brothers admitted that the volume of business has gone down drastically over the past decade. They hope to continue doing their task with the same zeal and interest but lament that it wouldn’t be long before they would have to bid goodbye to the city if business did not pick up.

“We work hard for our daily bread. And our job is to provide bread on the tables of scores of people in Muscat. God willing, we would love to continue doing this for many more years. If someone does recognises our talent and gives us another promising opportunity, things might become different for us,” Mohammed added hopefully.

Sold for a song