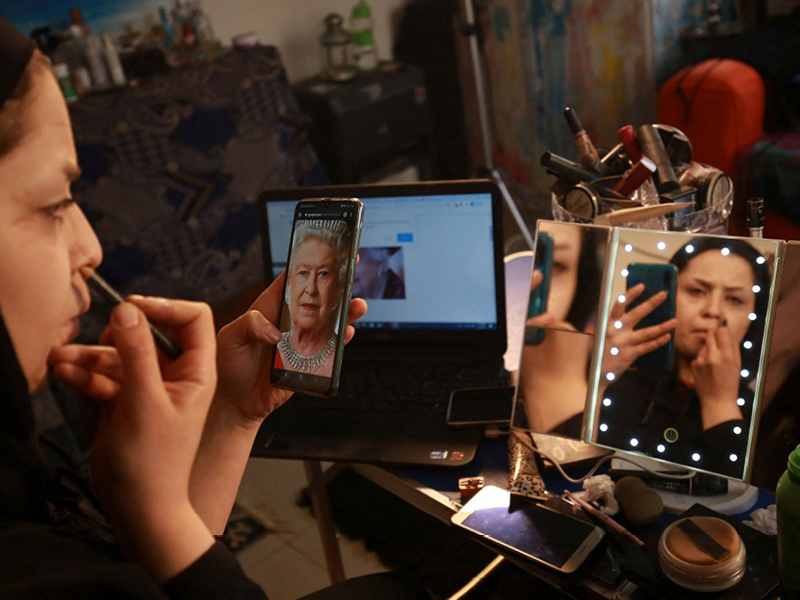 A young Jordanian make-up artist has beaten the lockdown blues and shot to online fame with videos of herself imitating famous figures from across the Arab world and beyond.

From Donald Trump and Queen Elizabeth II to Egyptian superstars like singer Umm Kulthum and actor Adel Imam, her characters have made Alaa Bliha a star in her own right with tens of thousands of social media followers.

The 27-year-old says she started making the clips to stave off depression, after losing her job as a theatre make-up artist in Bahrain and returning to a grim coronavirus lockdown in Jordan.

Based in a basement apartment in northern Amman, where she lives with her mother and young brother, she has transformed herself into Angelina Jolie, Michael Jackson and Cristiano Ronaldo.

“Everyone was bored and under psychological pressure when the pandemic began,” she said. “So I decided to bring people a bit of happiness.”

Months later, she has some 30,000 followers on TikTok and another 24,000 on Instagram, where comments on her videos are full of praise. “I was surprised by people’s positive reactions and encouragement,” Bliha said.

Her imitations of Lebanese singer Fairuz and Egyptian mega-star Umm Kulthum have been big hits, while her sketch of Emirati singer Abdullah Bilkhair has been watched more than half a million times on TikTok. But while they may be light-hearted, each video takes hours of preparation.

Bliha, a visual arts graduate, studies her chosen personalities and spends up to seven hours in front of the mirror applying cosmetics, wigs, accessories and even coloured contact lenses.Then she films herself lip-syncing over interviews or songs by her characters.

“I spend entire days watching videos to understand their behaviour, their movements, the way they talk, dress, walk or smoke. It takes me out of myself and I become another person,” she said, adding, “It’s a really strange feeling.”

Bliha’s clips provided a distraction from Jordan’s tough three-month lockdown last year, which was followed by months of curfew to stem COVID-19. Coronavirus has infected at least 330,000 people in Jordan and killed more than 4,300.

Some videos also have a serious note. On the International Day for the Elimination of Violence against Women in November, she posted disturbing images of herself made up with bruises.

“We need to shine a spotlight on these issues and take a stand,” she said. “Not everything in life is funny or entertaining. There are women who face violence and oppression, and this needs to stop.”

She says the pandemic has given some people time to discover themselves and develop new skills. And since she arrived home jobless, her videos have won her two offers of work at TV stations. Jordanian actor and screenwriter Omar Zorba has also hired her to work on a sitcom, to be aired during the Islamic fasting month of Ramadan.

“During the lockdown, I saw on Instagram that (Bliha) had done an amazing impression of me,” Zorba said. “She’s able to totally change actors’ faces, meaning they can play two different roles in the same series. Honestly, I haven’t seen another make-up artist in Jordan with this level of creativity and craftsmanship.”