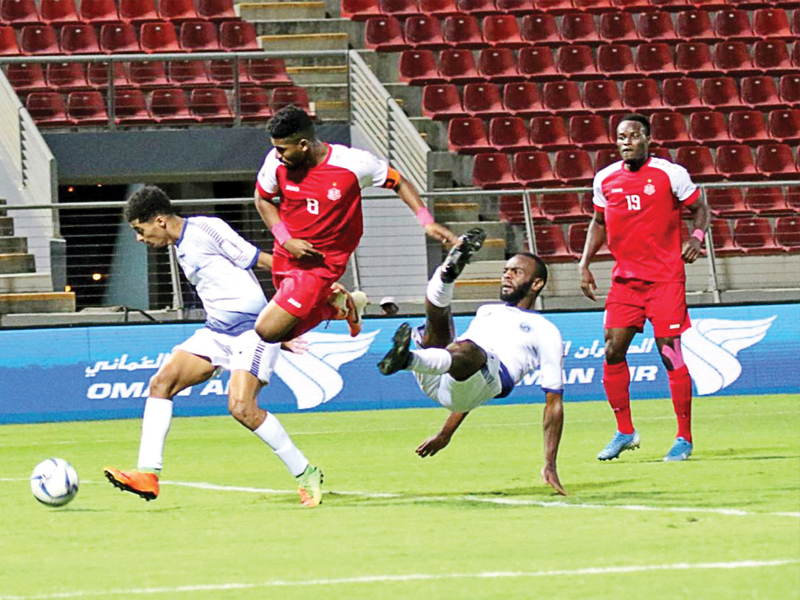 Defending champions Seeb suffered their first league defeat in 16 months when they went down 0-1 to unfancied Bahla in the 2020-21 Omantel League match at the Nizwa Sports Complex on Thursday night.

Holders Seeb hadn’t lost a match in the domestic league since September 21, 2019, when Fanja had recorded a 2-1 win in the second round of the previous season. However, Bahla, who recently appointed former Nizwa coach Abdulaziz al Riyami as their new manager, shocked their rivals for the club’s third successive win.

Ahead of the ninth round, only champions Seeb and 11-time winners Dhofar had not lost a match in the ongoing season.

Bahla’s decisive goal was scored by Robert Sanga just before the interval and the hosts then held on to the narrow lead.

Seeb’s Portuguese coach Bruno Miguel Pereira may have had the upcoming second-leg His Majesty’s quarterfinal game against Saham on Monday in his mind while fielding his starting XI against Bahla.

Seeb leads Saham 1-0 after the first-leg HM’s Cup quarterfinal that was played on February 5 at the Seeb Sports Complex and will travel to Sohar for the return-leg with a narrow lead.

There was no such trouble for Dhofar, who emerged a comfortable 2-0 winner against Saham at the Al Saada Sports Complex in Salalah, also on Thursday, to keep their unbeaten record intact.

Dhofar, coached by Rasheed Jaber, have now closed down the lead with Seeb to just three points as they have now garnered 19 points to Seeb’s 22.

It may be recalled that Dhofar have been docked six points ahead of the season along with Al Nahda and Saham by the Oman Football Association.

For Dhofar, it was back to winning ways after their draw in the previous round as they tamed Saham with goals from Ali al Busaidi and Khalid al Hajri.

After the match, Dhofar coach Jaber said, “What was important was to collect the three points. We will now focus on our return-leg HM’s Cup match against Al Mussanah on Monday.” Dhofar lead 2-0 after the first-leg quarterfinal against Mussanah.

Mussanah, meanwhile, continued to impress in the ongoing league as they edged past Sohar 1-0 at the Al Rustaq Sports Complex to stay third in the Omantel League standings with 17 points.

In the other matches, former champions Al Suwaiq hammered Oman 4-1 at the Seeb Sports Stadium and Al Nasr edged past Muscat by a solitary goal at the Al Saada Sports Complex.

For Suwaiq it was a much-needed morale boost as they bounced back after two successive defeats in the league. The win put them at fourth place with 16 points, a point more than Al Nasr.

Suwaiq recently signed a deal with former Iraqi coach Hakeem Shaker. The experienced manager has previously coached Suwaiq and led them to HM’s Cup and league glory. He is likely to take charge from next round following the completion of his quarantine protocol.

Rustaq are at sixth spot and are followed by Bahla, Oman and Ittihad.