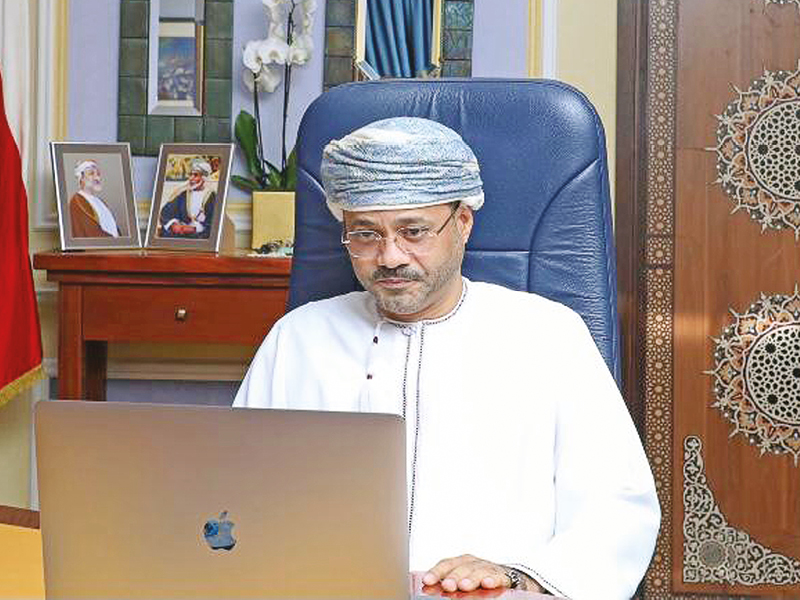 Oman is optimistic about the return of all parties to Iran nuclear deal – Joint Comprehensive Plan of Action (JCPoA) – and is prepared to facilitate regional discussions with Tehran.

The sultanate is also content with the level of its current relations and dialogue with Israel, according to H E Sayyid Badr bin Hamad bin Hamoud al Busaidi, Foreign Minister.

In an online conversation organised by Atlantic Council, a nonpartisan US-based think tank, on Thursday evening, H E Sayyid Badr spoke on a host of issues.

Talking about Iran and JCPoA, he said, “In 2015, Oman welcomed the establishment of the JCPoA. Today, I am optimistic that all parties may return to this framework.”

“Oman has supported the inclusion of Iran in dialogue on key issues of common regional concerns, and the JCPoA provides a vital first step,” H E Sayyid Badr said.

He added that the channels were directly open between the foreign policy teams in Tehran and Washington. “There is the availability of direct contact, should both countries choose to take that route.”

“Our role is simple, really. Our approach is to listen to everyone. We believe that by maintaining open channels of communication, we can build common understanding.”
With regards to relations with Palestine and Israel, the Foreign Minister added that Oman remains fully committed to peace and to the concept of peace, based on a two state solution.

“This is a matter of respecting justice and international law. Achieving this two state solution would be the single greatest contribution to regional stability we could presently imagine.

“As regards Israel, we are content so far with the level of our current relations and dialogue, which involve appropriate channels of communication, while at the same time we continue to engage with the Palestinians and support efforts for a resumption of direct negotiations sponsored by the US administration.

“The common goal is to reach a comprehensive, just, and lasting peace.”

We also believe in seeking to form partnerships based on mutual understanding, rather than alliances that form opposing sides.

“By maintaining open channels of communication we can build understanding, we can compromise, we can accommodate. There is a commitment on our part and a capacity for listening, for facilitating, should others find our approach helpful.”

This is why Oman has chosen not to participate in boycotts or blockades.

“It explains our decision many decades ago to support Egypt’s sovereign decision to make peace with Israel, and it lies behind our reluctance to think about regional tensions in terms of divisive distinctions such as Sunni versus Shia.

“It is also important to support and strengthen institutions that can assist in peace building and in enhancing stability.”

“For the Sultanate of Oman this means respecting international law and participating actively in both international organisations and regional ones, such as the GCC, and the United Nations,” he said.

“Oman welcomes the concrete signs that, as President Biden said last week, America is back, and diplomacy is back. Back in the Paris agreement, and ready to bring new urgency to international efforts to combat climate change. Back funding the WHO. Back in the fight against COVID, participating in the WHO vaccine consortium that seeks to ensure the poorest countries get the vaccine.”

He said that America is back as a force for peace, as three decisions designed to bring about an end to the armed conflict in Yemen clearly demonstrate.

“By helping stem the flow of weapons into the conflict, by removing the exclusionary designation of Ansar Allah as a terrorist organisation, and by appointing Tim Lenderking as Special Envoy, President Biden and his foreign policy team have given us genuine hope that the end to the conflict in Yemen may be in sight.”

“Oman considers itself a reliable partner of the United States in its efforts to encourage a peaceful settlement in Yemen, and, of course, in any other initiatives designed to promote peace and stability in the Middle East,” he concluded.