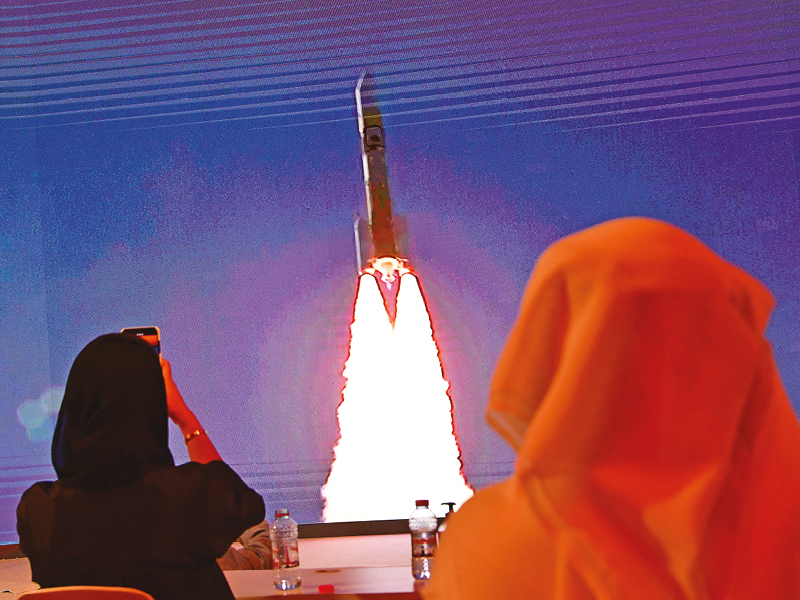 As the UAE made history on Tuesday evening becoming the first Arab nation, and the fifth in the world, to reach Mars after the ‘Hope’ probe successfully entered the Red Planet’s orbit, the excitement was palpable in Oman too. Experts and astronomy enthusiasts said the probe’s findings will benefit similar missions that Oman may have in the future as data will be readily available.

The Hope probe is the first of three exploration missions to arrive on the Red Planet in February. China and the US are leading ambitious projects to Mars, scheduled for arrival on February 10 and February 18 respectively. Hope’s arrival in Mars, after travelling 493mn km in seven months, will now transition to the Science Orbit phase – transmitting its first image of Mars back to Earth within just one week.

According to Dr Alaa Ibrahim, associate professor of space astrophysics in the Department of Physics at Sultan Qaboos University, the Hope probe will be the first to provide a clear picture of the Martian atmosphere that we currently know very little about. “This mission will be beneficial and a catalyst to multiple sectors – from space and astronomy to education and industry,” he said.

SQU students used to observe Mars through ground-based telescopes. But with the Hope mission in orbit around the Red Planet, Dr Ibrahim plans to engage students by allowing them a close look at the Red Planet once the mission’s data become available.

He said that Oman and other Arab nations will benefit from the mission. “This project and similar space endeavours stimulate innovative and competitive knowledge-based economies. In addition to putting the UAE on the map of space exploration, the findings of the Hope mission will benefit the research and education communities in Oman as its data will be readily accessible, assisting scientists to better understand planet Mars,” Dr Ibrahim said.

“The Hope probe will transition to the Science phase in the next few days and weeks, and capture and transmit its first images and observations of the Red Planet. The mission is expected to collect new data not currently available from any other Mars mission, and these will be shared with academic and scientific institutions around the world.

This is great news for Oman too,” he added.

Dr Ibrahim believes that the successful arrival of the mission on Mars shows that Arab nations are capable of conceiving major and challenging milestones. “It conveys the ambition and motivation of the people of the region in overcoming the challenges and realising their dreams,” he said.

Abdulwahab al Busaidi, head of observatory at Oman Astronomical Society, said, “This mission to Mars by UAE is a great achievement. This is a celebration and victory both for the UAE and the Arab world. It has reached its target of orbiting Mars.

“But we in Oman need to have our own preparations to land on Mars. An experiment was carried out in 2018 in Dhofar by the European Space Agency. We congratulate the UAE for their achievement. We look forward for more such missions to the space from the Arab world because discovering space is very important. The UAE is our neighbour; the mission will help us realise our own status and challenges in this planet. Space exploration is indeed a great duty that we need to explore.”

On Tuesday evening, UAE President Sheikh Khalifa bin Zayed al Nahyan congratulated his citizens and residents and the people of the wider region for the success of the Hope probe in arriving on Mars in the first-ever Arab interplanetary mission marking the Arab world’s entry in the global race of space exploration.

“This historic achievement would not have been possible without the persistence and determination to implement the idea that emerged at the end of 2013 by H H Sheikh Mohammed bin Rashid al Maktoum, Vice President and Prime Minister of UAE and Ruler of Dubai, who followed it up closely until its success,” he said.

The probe overcame the most critical part of its mission, the Mars Orbital Insertion that involved reversing and firing its six Delta V thrusters to rapidly reduce its speed from 121,000kmph to 18,000kmph. During the 27-minute critical phase, contact with the probe was kept to a minimum.

The team restored communication with the probe on its first day in Mars, to ensure its systems remained intact after the perilous phase it had just passed.

For the next three-four weeks, daily contact will be scheduled between the probe and the team back on Earth, enabling a quick turn-around of command sequence uploads and telemetry receipt.