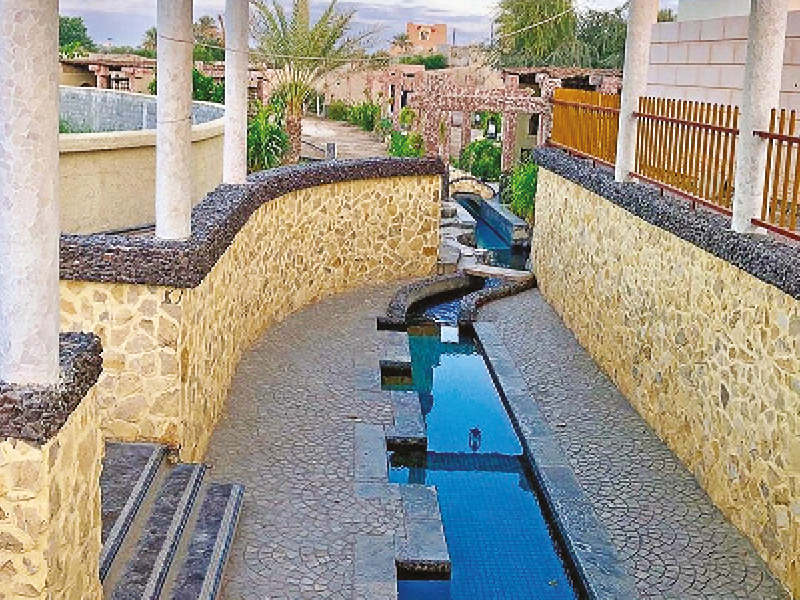 The 3,000 year old Falaj al Sarrani, located in Sara Oasis in the wilayat of Buraimi, went dry in the year 2000 leaving the surrounding farm land parched and thus impacting the livelihood of those depending on farming.

However, with the collective effort of the people of Buraimi and the dedication of one person in particular, the falaj sprang to life after 17 years. The community now wants to develop tourist facilities around the falaj to make it a popular destination in Oman.

Speaking to Muscat Daily, Talib Ahmed al Jabri, the main man behind this turnaround, said, “The 3,000 year old falaj Dawoodi went dry in 2000, with it dried most of the farms, if not all, in the vicinity.”

Dawoodi is one of the three main falaj systems that Oman has been traditionally using to channelise water for irrigation for ages. The other two are Gaily and Ainiya. The types of aflaj (as falaj systems are collectively known) vary according to the geological and hydrological nature of an area.

In 2017, Jabri, the supervisor of Falaj al Sarrani, started to clean the falaj and restore it alone.

“After I published a few photos on social media urging people to cooperate with me, many people joined me and collected RO200,000 to revive the falaj,” he said.

“Work continued with the equipment until reaching the depth of the falaj – 20m below the surface of the earth. The old falaj canal was filmed, and everyone was dazzled by its shape, geometry and abundance of water. After that, the government responded to the initiative.”

The erstwhile (then) Ministry of Regional Municipalities and Water Resources carried out maintenance for the 2,450m long water canal, all of which are under the surface of the earth, Jabri said, adding that the “government works are still continuing to maintain the canal until now”.

“The Ministry of Agriculture, Fisheries and Water Resources also issued a tender to support the initiative and develop modern irrigation systems for the falaj,” he said.

The agricultural area irrigated by this falaj is approximately 200 acres, Jabri informed, adding that the area produces many types of crops such as palms, mangoes, figs, grapes, lemons of all kinds, herbs, besides animal fodder.

Encouraged by the success, the local residents initiated efforts to develop the falaj into a tourist, cultural, entertainment and also an archaeological landmark. “People erected a gate at the entrance of the falaj and constructed stairs so that tourists can go down to see the falaj canal,” Jabri said.

“A portion of the canal has been designated for swimming.”

While talking about the reconstruction of the falaj system, Jabri said the residents covered the canal with ceramics and natural stones and provided adequate lighting, while completing this as a modern irrigation network for the cultivators around it.

“This has been done as per the Omani architectural design and style,” Jabri said.

For tourism purposes, local people have constituted a council to receive guests.

“Many tourists from the countries such as Georgia, Russia, Iran, besides those in America, Europe visited the falaj,” he said.

“I have travelled to several countries such as India and Morocco to promote falaj and water resources in Oman,” he said.

“We are still working on maintaining the falaj. We will establish some facilities such as a museum, a craftsmen’s market, a restaurant serving traditional Omani food and other projects.”