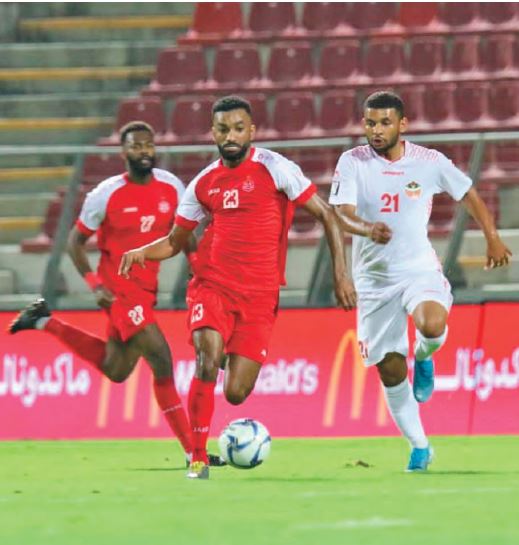 Defending champions Dhofar’s 2-0 victory celebrations over Al Mussanah in the first-leg of the 2020-21 His Majesty’s Cup quarterfinals at the Al Saada Sports Complex on Saturday night were dampened by the injury to their experienced defender and captain Mohammed al Musalami.

The nine-time winners of the prestigious trophy dominated the match at home and having earned  a two-goal cushion in the first-leg, look set to book their berth in the semifinals.

The return-leg will be played at the Al Rustaq Sports Complex on February 15.

The hosts failed to find a breakthrough against Mussanah in the first-half and it was only in the 60th minute that Harib al Saadi opened the account for the champions. Coached by Rasheed Jaber, Dhofar got the crucial second goal seven minutes from the final whistle as Abdullah Fawaz found the net.

Speaking after the match, Jaber said, “The match was not easy. My players lacked focus in the first half, but we were able to dictate and dominate in the second half to achieve the desired result. The 2-0 win is an important step towards our goal of advancing to the next round.”

Meanwhile, the club doctor Ayman El Sherbiny said that Musalami sustained a cut wound on his head during an aerial tussle with a rival player in the match. “He will need few days to recover completely and I hope he will be ready for the return leg,” he added.

Following the completion of the first-leg quarterfinal rounds, Ibri hold a 1-0 lead over three-time winners Al Suwaiq and play their return-leg at Rustaq Sports Complex on February 16.