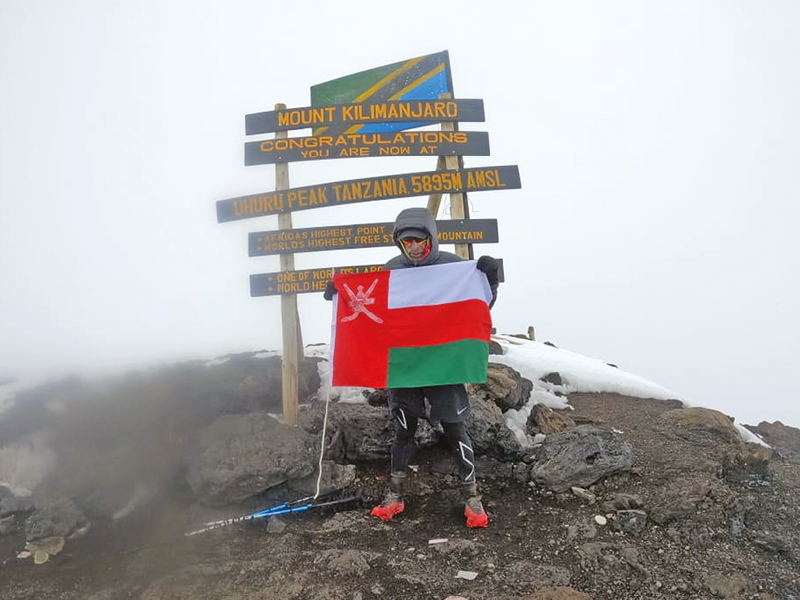 A sexagenarian has proved that 60 is not the age to sit back and reminisce about the past but to lead by example.

Last weekend, Hamed Hamood Said al Harthi, 62, completed a speed ascent and descent of Mt Kilimanjaro, in the process creating a record of sorts at his age of accomplishing the feat in 15 hours and 20 minutes. Harthi’s aim with the challenge was to create awareness on autism and support children with the complex developmental condition.

By scaling the 5,895m peak, Africa’s tallest, he has inspired many mountaineers to take on the challenge. It was Harthi’s seventh conquest of the mountain.

Speaking to Muscat Daily, Harthi said, “On this trip, I began my first ascent on January 18 and reached the top of the mountain on January 26 as part of preparations for the 15-hour speed attempt.

“Then on January 29, I started at 5am and after ten hours, I reached the summit. It took me five hours and 20 minutes to climb down. I believe that in my age category, it is a world record.”

He raised Oman Autism Society’s flag on the summit.

“Nothing is impossible when you set your mind to achieve something. I also raised Oman’s flag at the peak.”

Determination was the key, Harthi said, explaining the challenges encountered on his way up. “The climb was not easy as the weather was unpredictable. I walked and ran over 15 hours to reach the top and back. Additionally, there was snow. It was cold, it rained and the rocks were slippery. I got altitude sickness and vomited,” he said recounting the experience.

His preparations for the seventh conquest of the mountain involved rigorous training.

“But apart from physical training, a climber has to be prepared mentally for such expeditions. I trained on the Sa’al Stairs and other jebels in Oman for both physical and mental preparedness.”

Besides Mt Kilimanjaro, Harthi has scaled Mt Batur in Indonesia, Mt Karisimbi and Mt Bisoke in Rwanda, Mount Meru in Tanzania – three times, mountains in Switzerland and Cerro Bonete in Argentina. “I have attempted Aconcagua, also in Argentina, twice but couldn’t reach the summit,” he informed.

While he hasn’t chalked out plans for his next challenge, he is considering an ultra marathon.