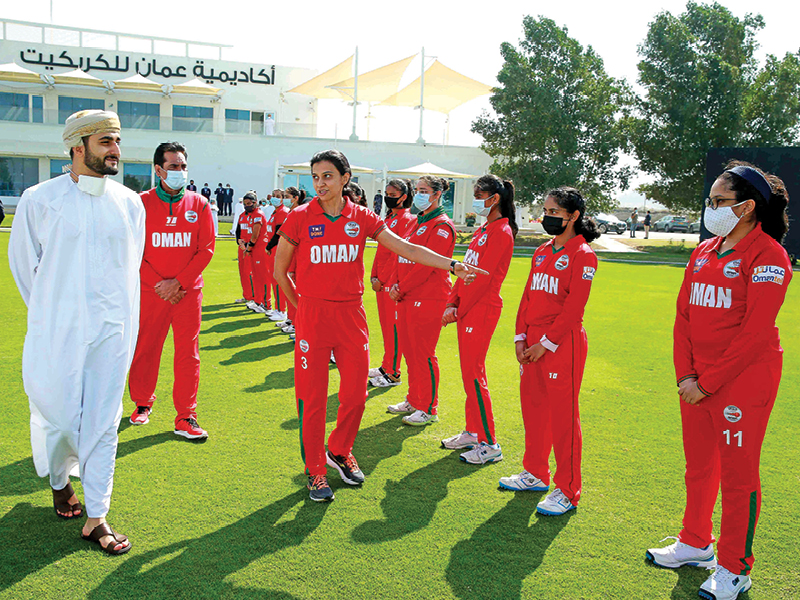 During his maiden visit to the OC facilities on Wednesday, H H Sayyid Theyazin met with the national men’s, women’s and U19 teams.

H H Sayyid Theyazin was impressed by the world-class facilities at the OCA and also interacted with young cricketers training under expert coaches.

H H Sayyid Theyazin was taken around the indoor and outdoor facilities including net practice arena and gymnasium, which is equipped with state-of-the-art equipments.

Senior board member Pankaj Khimji briefed H H Sayyid Theyazin on OC’s journey over the past four decades and the recent achievements of the national men’s team. The Minister of Culture, Sports and Youth congratulated OC board members after being informed of the laurels achieved by the national teams.

Oman’s rankings have soared in recent times with the national team placed 14th in ICC ODI Team Rankings among 20 nations and 18th in T20Is among 85 countries.

OC recently was also given the go-ahead by the ICC to host Test matches after the main ground at Al Amerat was approved as a Test venue.

During his visit, H H Sayyid Theyazin was introduced to the national men’s and women’s teams by Duleep Mendis, OC chief development officer and head coach, and Vaishali Jesrani, captain of women’s team.

H H Sayyid Theyazin was later presented a commemorative cricket bat by OC board of directors.

Present on the occasion were H H Sayyid Qais al Said, OC vice-chairman, H E Rashad al Hinai, Undersecretary at the Ministry of Culture, Sports and Youth and other board members.